Does one graph explain the huge variations in COVID death rates for different parts of the world? 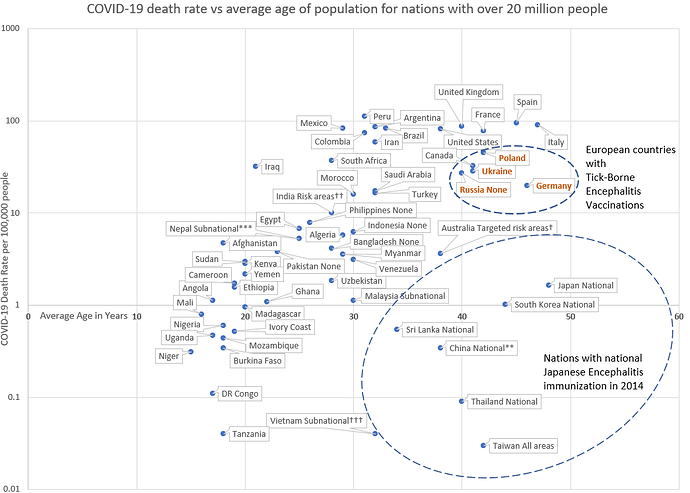 Is it possible that immunity to JE and TBE explain much of the difference in COVID-19 death rates?

Here are links for background information:
Cross-Protection Induced by Encephalitis Vaccines against COVID-19 Might be a Reason for Relatively Lower Mortality Rate in Some Countries (nih.gov)

2 Likes
Are cracks developing in the China-CIA alliance?
If only Trump had followed Taiwan's lead in effective COVID response
The death toll from China's covert war against the US has reached over 1.6 million
The White House is ignoring "red lines" from China. What could go wrong?
Looks like we dodged a bullet on the COVID pandemic
Call_me_Ishmael December 3, 2020, 1:12pm #2

If the data is correct, it tells a story. For it to be actionable though, one needs to see if other factors could explain the graph.

There certainly is SOME correlation.

Interesting aside…Japanese Encephalitis is fine…Wuhan or China virus is less than fine.

The JE vaccine is available in the US for long-term visitors to rural parts of Asia where the disease is found.

The vaccine makers I am sure were using this data as a starting point.

This JEV association was reported as early as April 2019.

The story may be that COVID-19 has been a highly effective bioweapon.

It is as if the virus has been engineered to target the US and western Europe while leaving China and its neighbors with little damage. It has cost the US trillions of dollars in damages, killed hundreds of thousand of Americans, and arguably had a big effect on the 2020 election results that are favorable to China.

That assessment agrees with recent comments from a Chinese sociologist, Dr. Li Yi: 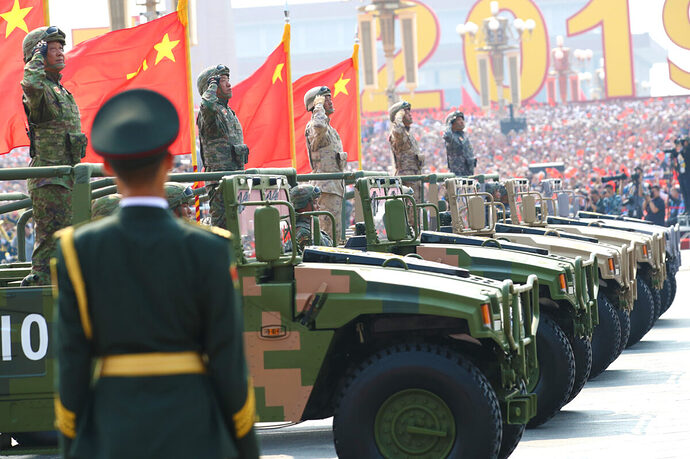 Will China try for a repeat of their success?

If the data is correct, it tells a story. For it to be actionable though, one needs to see if other factors could explain the graph.

Note: I used quick google searches for average ages and COVID cases/deaths because the data that produced the graph is unsourced.

The average age in the chart is the median age from this link:
Population by Country (2020) - Worldometer (worldometers.info)

One would think think the US response to a bioterror attack would be something other than to just take it. What kind of leader does jack ■■■■ with regards to an attack on America that has claimed nearly 100 times the number of souls as on 9/11?

I just realized I’m using deaths as a percent of the number of confirmed cases. They are plotting deaths per100,000 population. That makes the correlation they are trying to suggest even less pertinent.

The average age in the chart is the median age from this link:
Population by Country (2020) - Worldometer (worldometers.info)

Okay, thanks. There seems to be quite a bit of discrepancy there too.

I expect that the Trump administration already realizes what has happened and will release information to show that pandemic has really been a bioweapons attack. If Biden takes control in January, I expect him to secretly thank the Chinese government for releasing the virus to help swing the election, then he will blame Trump for every death. China owns Biden in my opinion.

There are a number of important implications if it turns out that the JE vaccination provides immunity to the virus:

This thread started off with such promise…then of course just had to take a turn towards the conspiratorial.

Can you provide an alternate explanation of how 5 million people could leave Wuhan using packed buses and trains just before the lockdown without a nation-wide epidemic?

I see no reasonable explanation for the extraordinarily low COVID death rate in China other than the population was already highly resistant to the disease. One possibility is that China developed a COVID vaccine and secretly vaccinated over 1 billion people before the release of the virus. I think it is unlikely that China could do a task of this magnitude without the rest of the world finding out.

On the other hand, it certainly possible to engineer a virus to have features that would allow an existing vaccination to provide effective immunity. The probability of the coronavirus naturally having features create that would give cross-immunity with the JE virus is extremely unlikely for several important reasons:

We are going to find out that the virus Trump’s adoring throng deliberately spread what they believed to be a Chinese bioterror weapon was in fact all along a Chinese bioweapon.

New China TV did these stunts in Italy in early February. The message was if you don’t remove the mask and hug a stranger, you are xenophobic and racist. Of course at that same time China was locked down the virus was starting to spread in Europe and the US.

It looks like China was working hard to infect the world.

Please hug me. I’m Chinese. I’m not a virus - YouTube

March 2, 2020, New York City health official at news conference the Gov. Cuomo and Mayor De Blasio:
. . . we know that there is no indication that it easy to spread through casual contact. There is no need to do any special anything in the community. We want New Yorkers to go about their daily lives. Ride the subway, take the bus, go see your neighbors . . .
Watch live: New York officials hold press conference on state’s first coronavirus case (cnbc.com)

Looks like Democrats were following the guidance from China, but China’s population appears to have been much more resistant to the virus.

I am in the camp of thinking it was not a weapon but the virus got out of the Wuhan lab I would hope unintentionally. It doesn’t take a big leap on conspiracy to think that the only level 4 virus lab in China was just 300 yards away from the wet markets were supposedly it started from.

Interesting hypothesis and worthy of examination.

Interesting, if accurate, but the chart lacks some important information.

It is also true that more than half of Chinese leave their windows open 12 months a year and almost zero Chines3 buildings are built with window that can never be opened.

None of China’s numbers can be trusted so that 5% figure is likely actually multiples of 5%.

This thread started off with such promise…then of course just had to take a turn towards the conspiratorial.

3. Law An agreement between two or more persons to commit a crime or accomplish a legal purpose through illegal action.