Show the proof… that is all.

You’ve already seen it proving that no matter what I showed you, there’d be some form of denial. Now…how do we know this is true? Cuz due to you knowing it being true, you wouldn’t put your avatar up for a bet and it’s just that simple…amirite?

Bam…that’s the lib plan they’ve been talking about and attempting to implement at our southern border.

Show the proof… that is all.

You’ve already seen it proving that no matter what I showed you, there’d be some form of denial. Now…how do we know this is true? Cuz due to you knowing it being true, you wouldn’t put your avatar up for a bet and it’s just that simple…amirite?

I watched the video.

They were talking about shifting demographics and how that may have an impact on future electoral power. That is something that has been talked about since the Bush 43 administration.

Talking about shifting demographics does not prove that there is a conspiracy to replace white voters with illegal immigrants.

I believe they’re doing it to remain in power. Those in power can tap into corrupt funds that they’d never, EVER earn honestly out in the real world.

He’ll there was people on here hoping unvaccinated people would die off from covid to change the electorate.

ith the unvaccinated dying off the way they are we’ll get there. I’m good with that.

There was anouther that said old people.

No they haven’t. Millennials are not running to the Grand OLD party. Demographics are not in cons favor. This impeachment won’t affect that. That is correct. The only remaining demographic which leans Republican is older white males without a college degree. Every other major demographic leans Democrat. Millennials are 2:1 Democrat:Republican when looking at voting trends. I wouldn’t hold my breath that the millennials will flip Republican.

Another Warning Libs - #32 by SottoVoce 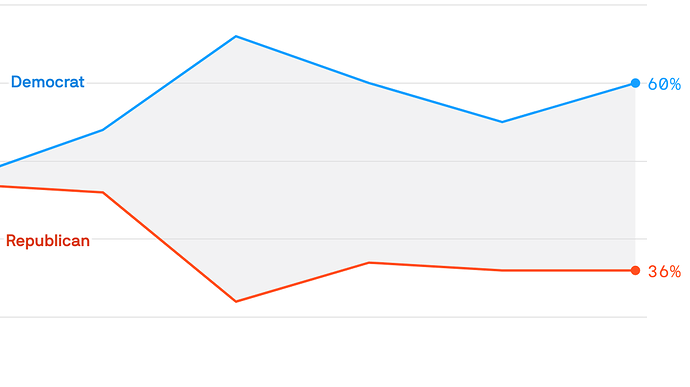 "Generational replacement will not be kind to Trump’s Republican Party."

It’s not a narrative. It’s a fact and people here have shown you (c) the clips to show it.

Correct. It is a fact. Of course I could ignore it like you do with the mountain of CRT evidence.

The goal is to build a new proletariat. Do you deny it?

Ahhhhhhhh…the “replacement theory” is the new narrative being fed to their sheople so they can regurgibleat that it’s all not true, even though libs have said this is their intent for several years now? Got it…carry on libs. Lying is becoming who you are and being sheoplized, is now commonplace.

Dude… I have seen time and time and time and time again on this very forum, some of the members here stating that there is a conspiratorial plan by the Democrats… sometimes George Soros… to bring in illegal immigrants to cause a demographic shift in order to be able to establish one party rule.

It really just takes you one YouTube video to believe that libs are trying to replace white people?

Why do you think progs are for mass illegal immigration?

Isn’t this what you want? People stopped and detained at the border? I keep hearing that the border is wide open, but the article you posted seems to contradict that.

“Detained” is not “deported”.

It’s funny how you want to have it both way.

I didn’t know I was ahead of my time and leading this? I’ve never coined the phrase GRT and had no idea what the ■■■■ you were talking about. That said, I’m also not blind to the reality around me. BTW…what does GRT stand for? Something…replacement theory?

It’s a theory that states that non white people are attempting to replace white people by importing brown people (sound familiar), lowering the birth rate of white people (legalizing abortion), or by violence (they are killing us)

Or all three and many more. But you and I know it’s not racial, don’t we?

Says the one living in Maine.

Then why do dems advocate against addressing illegal immigration?

Like I said, deportations are down and the border is not wide open. Both things are true.

No. Nice try. The critically conscious are importing people they believe will make new crits.

When will white’s no longer be a majority?