As a prelude to the thread, we of course do not know the future. Not the extent of the current virus. Not the extent or severity of the economic fallout. We don’t know how far the Federal Reserve is willing to go on the monetary inflation front to try to stave off a recession.

IF things work out in Trump’s favor, he can be reasonably competitive with Biden and could pull off another popular vote minority/Electoral Vote majority victory. I don’t think Trump can win the nationwide popular vote, but of course he does not need to.

With the Democratic nomination process tipped well in Joe Biden’s favor and with a high probability of a major economic crisis from here through the November election, it is a good time to take a peek at the Electoral College.

One thing is 100% certain. Trump MUST stave off a recession to win. If the economy goes into recession in any degree at all, he is toast. A major recession and Biden wins in a landslide.

Three tossup States that Biden does not need but Trump must have, Arizona, Florida and North Carolina.

To win, Trump must carry those three tossup States, plus 11 electoral votes from the 47 that were carried by Trump in 2016 but now lean Biden. That means either win Pennsylvania, Michigan or Wisconsin + Maine’s 2nd Congressional District.

If Trump staves off economic trouble, it is doable. He could theoretically lose the popular vote by 5,000,000 votes yet win the Electoral College. He could carry the necessary States by small margins while losing big elsewhere.

But he cannot, under any circumstances, prevail if the economy is in any degree of recession. The part of the working class in the Rustbelt that is supporting him will ditch him in a recession and he will lose.

Trump’s best case scenario, if the economy holds, would be a repeat of his 2016 performance.

Trump’s worst case scenario is truly brutal, Biden 413 to Trump 125, although the likelihood of a result anywhere near that bad is very low.

But all Trump’s hopes are predicated on the state of the economy in November.

He can win, but only with a good economy.

With a good economy, I put Trump’s chances against Biden at an even 50/50.

And the state of the economy in November is something I cannot predict at this point, not anywhere near enough information and too many variables.

My analysis right now is closer to that of Charlie Cook that to that of Larry Sabato.

North Carolina - 15 (Trump did not win an outright majority of the popular vote here in 2016 and his plurality was a mere 3.5%. EITHER a strong turnout by black voters or a significant economic downturn could make the difference here.)

(A further note on North Carolina: As with Georgia and the Big A, North Carolina statewide politics is being inexorably influenced by growth in Charlotte/Mecklenburg. Both the city and the inner suburban areas are very blue. The outer belt of suburbs trends from purple to red, but Trump has done nothing to ingratiate himself to suburban Republicans. Growth in Raleigh, Durham and Chapel Hill is also not helping Republicans statewide and Chapel Hill is deeply blue. The red rural counties which used to have unquestioned power over North Carolina are beginning to matter less and less, because they are either not growing, growing very slowly or in some cases actually declining in population.)

Florida - 29 (Trump did not win an outright majority of the popular vote here in 2016 and his plurality was slightly over 1.0%. Economics is more significant here than black voters.)
Arizona - 11 (Again no Trump majority and only a 3.5% plurality. Again economics.)

New Hampshire - 4 (This was incredibly close in 2016 but even so, it is extremely unlikely that Trump will win here, particularly given that he facing an uphill economic situation. Plausible that he could win, but highly unlikely.)
Nevada - 6 (Again, possible, but EXTREMELY unlikely that Trump wins here.)
Minnesota - 10 (Ditto.)
Maine at large - 2 (Ditto.)

Visually (how things stand right now, not necessarily the result in November): 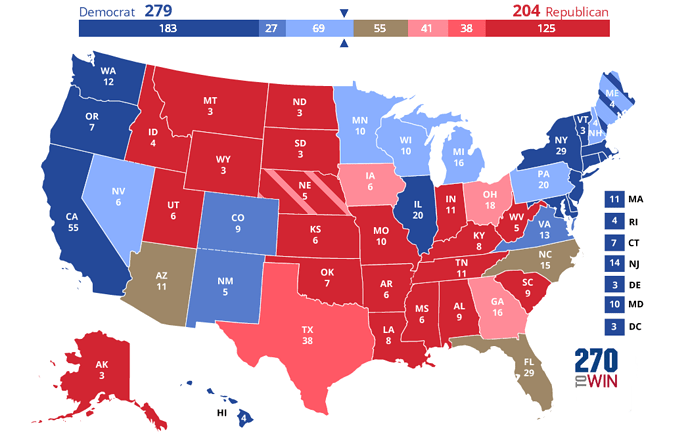 I think az flips.to biden. With mcsally getting tossed as well.ohio stays trump and florida a nail bitter given the governor race.

I think az flips.to biden. With mcsally getting tossed as well.ohio stays trump and florida a nail bitter given the governor race.

I do think McSally loses even if Trump hangs on to Arizona.

Guess we will see…i think Biden wins over never trumpers

Anybody at this point wanna bet a pizza on it? Surely…Joe’s gonna win? The polls say it…amirite?

I do the same daydreaming when I buy a Lotto ticket.

That is the only value I get from them.

In reality? Probably 535-3 (Biden takes DC because they are all terrible people)

Normally I would agree, the economy is a huge factor in elections. This is a different scenario. Trump has given us a great economy in his term so voters know his track record. If the Corona virus causes a recession, voters will know that it was not due to anything Trump did or did not do, it is totally beyond his control.

Trump is not going to lose his base, nor is he going to pick up any never Trumpers. The election will still be decided by undecideds and independents in swing states, who will have to look at Bidens record under Obama and decide if he would have done a better job in handling the Corona fallout and will his policies going forward from Jan. 2021 be better than Trump’s. The voters will also get to assess Bidens overall health and mental acuity by election time too and neither of those gives voters a feeling of confidence.

Look for Democrats to exploit the Corona virus situation and use every possible opportunity to smear Trump with claims of incompetent handling of it. Smearing and lying is their usual MO, and it’s their only hope because the independent and undecided voters will outright reject Bidens far left agenda otherwise. So far, Trump is handling the situation very well…

I think arizona will go biden as well.

Just as a matter of curiosity subsequent to Trump’s speech how many clarifications to his speech were there?

I would probably put Wisconsin as a toss up state. But if the economy goes into a recession soon, Biden will likely win Wisconsin.

But if the economy goes into a recession soon,

Joe and the Democrats lost all credibility after pushing the sick Russian collusion lie, they are nothing more then oxygen thieves now.

It has been summer in the Southern Hemisphere for months and the spread is not slowing down there.

I hope so. I know people’s retirements are taking a beating. I’m looking for some good buying opportunities when the market starts to turn back around. In the meantime, hold on…

Anybody at this point wanna bet a pizza on it? Surely…Joe’s gonna win? The polls say it…amirite?

I’m in. I don’t mess around with my pizza though so none of that national chain trash.

I want an 18" Stagger Lee
https://eastsidepies.com/

I am curious. Did you post this because it is what Trump said or do you have a link to a Doctor or Scientist who offered this opinion?