Looks like some Democrated in Toledo Ohio may have gotten caught with their hands in the cookie jar.

Guess they didn’t learn from Chicago politicians that got caught allegedly doing the same thing.

The FBI started its investigation into the Toledo City Council members in 2018 for allegedly soliciting or accepting money or other things of value from local businesses in exchange for their votes.

Harper reportedly solicited nearly $16,000, the largest sum out of the council members. She also faces charges of unlawful interstate communications with the intent to extort.

The FBI on Tuesday arrested a local attorney and four members of the city council in Toledo, Ohio, for participating in a bribery and extortion scheme.

If convicted, I hope that Ohio has some way to remove them from office. They can’t do their job from a jail cell.

Oh, and fox doesn’t identify them as Democrat . . . . but found this in another article:

“A culture of corruption exists within Toledo City Government. Four Democrat city council members – including the Executive Director of the Lucas County Democratic Party – have been arrested by the FBI in connection with a bribery scheme in Toledo city government." 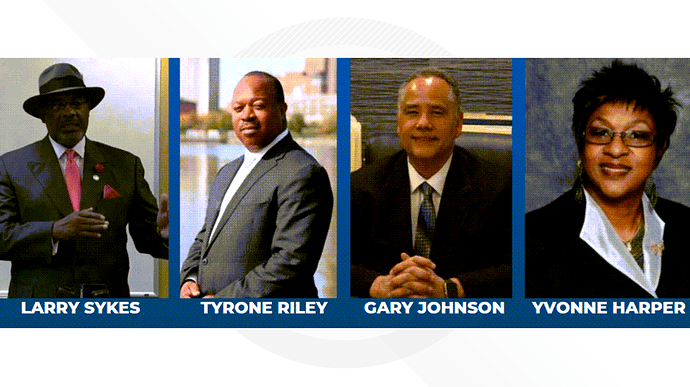 Four city council members and one local attorney were arrested Tuesday. The representatives face charges of bribery and extortion.

I think any politician convicted of bribery or extortion should get a min of 20 years no parole.

Yep…you got the dems now. Republicans aren’t ever corrupt are they?

So no comment on 4 dem council members in one city being arrested for bribery and extortions?

Republicans aren’t ever corrupt are they?

Find your stories and make your own threads on them. Go ahead. lets see them.

Criminals got locked up… good.

I wonder why you’re so concerned about what political party they belong to.

Probably this for starters…

Democrats vs Republicans: Which party is more corrupt? | Rantt Media

We compared 56 years of corruption under both Republican and Democratic administrations: both sides are certainly not the same.

Since it wasn’t mentioned in the FOX article I was curious and went to a more local source to find out.

Confirmed what I thought.

That’s not anything local.

What your saying is you got nothing in the last 2 years for what might be a majority of a city council . . . . all of one party . . . . getting charged?

Since it wasn’t mentioned in the FOX article I was curious and went to a more local source to find out.

Confirmed what I thought.

And what did you think? 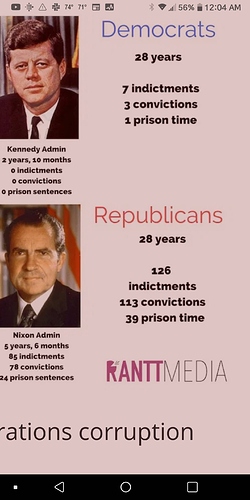 Democrats got some catching up to do!!!

I took a gander at the first of your article.

First – media that I’ve never herd of, so I don’t know the quality of their work

Second – it was dealing with presidential administrations.

Keep digging. Find something last two years with replican city councils were 4 of them have been indeicted on corruption charges. I’m POSITIVE you can do it. Dig deep.

Democrats got some catching up to do!!!

I’m not surprised at all to see this comment. Quite typical actually. Deflection is the normal game of the left.

I’m not the left. You should know better. I’m just making a point. Or is that not allowed by those of us perceived to be on the left.

I’m not the left. You should know better. I’m just making a point. Or is that not allowed by those of us perceived to be on the left.

Well when you do this:

Yep…you got the dems now. Republicans aren’t ever corrupt are they?

Without even commenting on the subject of the thread

Then asked for Republican corruption all you come up with is a study by an unknown web site that did some analysis of president administrations saying republicans are more corrupt.

Sure as hell don’t sound like a C(k)onservative or republican.

Or would you like to read the article I linked to and give your personal comments on the 4 dem council members and what they appear to have done.

Yeah…you got me. Nothing but a rotten liberal. I think I’d better go and leave the house to the conservatives. It’s there house now. Us “libs” better recognize…lol.

Your still not commenting on the subject of the thread. Four council members indected and arrested for corruption.

I think any politician convicted of bribery or extortion should get a min of 20 years no parole.

On this I will agree. They are public servants…and violating the public trust should be punishable R or D.

Your years of posts show otherwise.

Whatever… I will give your opinion the proper amount of consideration.

You project your own impressions here, we can but observe.

Now for the fun part.

Did you job for you in searching for council members accused of corruption.

Philadelphia City Councilmember Kenyatta Johnson twice came to the rescue of a financially struggling nonprofit desperate to hold on to its real estate holdings in his district — but his assistance, federal authorities said Wednesday, always came at a price.

In a 43-page indictment, prosecutors charged the three-term Democrat and his wife, Dawn Chavous, with accepting more than $66,750 in bribes in 2013 and 2014 from two executives at Universal Companies, the South Philadelphia community development charity and charter school operator founded by the renowned music producer Kenny Gamble.

Surprise – another D. Later in the article says he is the 2nd D council member to be indicted on corruption charges.

Los Angeles City Councilman Jose Huizar, long suspected of being a target in a sweeping corruption probe involving a “pay-to-play” scheme at City Hall, was arrested Tuesday on a federal racketeering charge.

Huizar, who represents L.A.'s Council District 14, was taken into custody by FBI agents at his Boyle Heights home, according to Laura Eimiller, spokesperson for the FBI’s L.A. field office.

He has been charged with “conspiring to violate the Racketeer Influenced and Corrupt Organizations (RICO) Act,” federal prosecutors said in a news release, alleging he agreed to accept at least $1.5 million in bribes.

Oooooh another D Council member that was corrupt. Huizar's arrest follows a string of corruption-related charges connected to an FBI investigation into a "pay-to-play" scheme tied to land development. The investigation was given the codename "Casino Loyale."

New Orleans City Councilmember-at-Large Jason Williams has been indicted by a federal grand jury on 11 counts including fraud and tax charges, according to a court document. New Orleans City Councilmember-at-Large Jason Williams has been indicted by a federal grand jury on 11 counts including fraud and tax charges, according to a court document.

Jacksonville, Florida – A federal jury today found Katrina Brown (39, Jacksonville) and Reginald Brown (57, Jacksonville) guilty of conspiracy to commit mail and wire fraud, aiding and abetting mail and wire fraud, and aiding and abetting money laundering. The jury also found Katrina Brown guilty of attempted bank fraud and making false statements to a federally insured financial institution, and Reginald Brown guilty of failure to file an income tax return with the Internal Revenue Service for tax year 2014. Each bank fraud or false statement offense carries a maximum penalty of 30 years in federal prison. Each conspiracy and aiding and abetting mail and wire fraud charge carries a maximum penalty of 20 years’ imprisonment. The money laundering offense carries a maximum sentence of 10 years in federal prison, and the income tax charge carries a penalty of up to a year in prison.

Yet another suprise. Both D’s again. (this one took some digging to find political affilation.