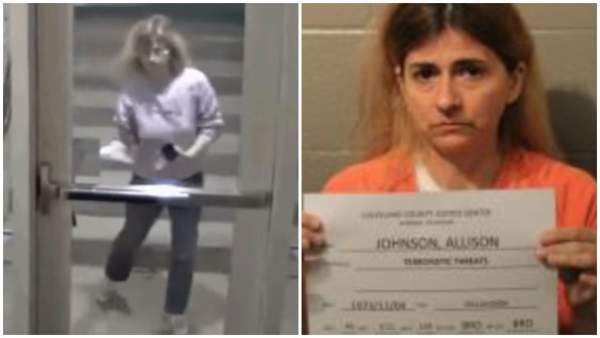 Bad stuff at that link. Don’t click it unless you wanna see hate.

“The offense is listed as “Act of Terrorism F (Intimidation).” The Norman Police Department clarified on social media that Johnson faces a charge of making Terrorist Threats. Bond was set at $25,000. As of April 8, Johnson remained behind bars.”

Originally a bunch of Republicans said this was an inside job. It appears they were wrong. Also, here’s a few things she spray painted…

The liberal Trojan horses are really starting to pile up.

In all seriousness though, glad they caught the person responsible, even if it’s sad we are still seeing ugliness like this in 2019.

When you said something about scaring the Jewish people, I thought
you were talking about ilhan Omar.

Anti-Semitism is bad no matter who is doing it.
But I’m guessing that this is a thread to try and take the heat off the fact that
ilhan Omar is a anti-Semite. Ilhan Abdullahi Omar (born October 4, 1982) is an American politician serving as the U.S. Representative for Minnesota's 5th congressional district since 2019. She is a member of the Democratic–Farmer–Labor Party. Before her election to Congress, Omar served in the Minnesota House of Representatives from 2017 to 2019, representing part of Minneapolis. Her congressional district includes all of Minneapolis and some of its suburbs. Omar serves as whip of the Congressional Progressive Caucus a...

Complain about deflecting while deflecting. Perfect.

Complain about deflecting while deflecting. Perfect.

One would think that a ton of posters would denounce this woman.

Sorry, not my job to seek out every mention of mental cases spray painting racist garbage on the internet and denounce them. Now that I have seen this one I have no problem denouncing her, denounce, denounce, denounce, there, I said it three times, happy?

Umm, no I wouldn’t. I hold liberals responsible for their own actions, not the actions of mental patients who may also happen to be liberal.

Feel free to back that up and show a post of mine calling on all liberals to denounce the acts of a liberal nut.

The old boards are gone

Obviously a deranged meth head out of a trailer park. That article does not match the pictures. It says “gas Arabs” and she apparently has a problem with Chinese people as well as the Jewish people.

The old boards are gone

The new boards have been up quite a while. I share the same opinion as that expressed by the democratic party in the article, both now and always. Namely

we still believe that hatred, bigotry, and criminal behavior are non-partisan issues. We do not believe the Republican Party is to blame for the actions of a single individual, and we sincerely appreciate the support and messages of solidarity we have received from friends across the aisle.”

Yea never found the need to be on hate sites to find things to denounce. I guess it is a way to deal with their guilt.

Work on your reading comprehension and or stop deflecting ?

Such blind hatred. I fail to understand what makes these Low Information types tick

Since President Trump is not anti-Semitic or anti-Israel there is something obviously wrong with this woman and those who keep harping on this ridiculous accusation! We now have the USA embassy in Jerusalem and President Trump has a Jewish son-in-law & 3 Jewish grandchildren so the “Trump 2020” scrawl should be a “clue” to clear thinking that’s something is not right here! JMO