US Capitol Police chief to resign after Wednesday's riots

US Capitol Police Chief Steven Sund is resigning amid criticism over an apparent lack of preparedness to deal with Wednesday's violent mob on Capitol Hill.

It seems the Chief having been offered additional support with the upcoming Trump Rally he turned it down.

As a result his officers were stretched beyond their capacity to both protect the Capitol Building resulting in it being penetrated and at least one officer being injured as shown on the video when the “protesters” turned into a mob attempting to breach the barricades and enter the building.

Not only that they were in standard uniforms, way under equipped to handle a protest that could easily foreseeably get out of hand turning into a riot or worse.

This lack of leadership and preparation led to what could have easily turned into a horrible tragedy.

Will we see more accountability?

They way libs behave towards them…capital police etc. It’s no wonder they let peaceful protestors in.

I would too with their attitude.

Both Sergent-at-Arms have resigned as well.

Was there any failure on their part?

Since both resignations were asked for, it appears the House and the Senate leadership thought so.

Since a blind monkey could have seen this coming, it’s not surprising. They failed at their job.

Anything specific or are they just chopping off heads?

Why did they refuse help? That is the real question…

Their chambers were breached by an angry mob.

The two Sergeant-at-Arms are the appointed officials charged with the responsibility to secure the building.

The Buck stops there.

Since both resignations were asked for, it appears the House and the Senate leadership thought so.

There was no thought to it. They pissed their pants and somebody has to pay.

It was undeniably a staggering failure of security.

Capitol police are charged with securing the building I thoght the SGA’s responsibility ended at the chamber doors?

Once the mob got to the doors there was nothing they could do other than attempt to protect the members, I feel like they are getting shafted here.

And one that needs to be answered.

It was undeniably a staggering failure of security.

What do you think would have happened had they tried to stop them? 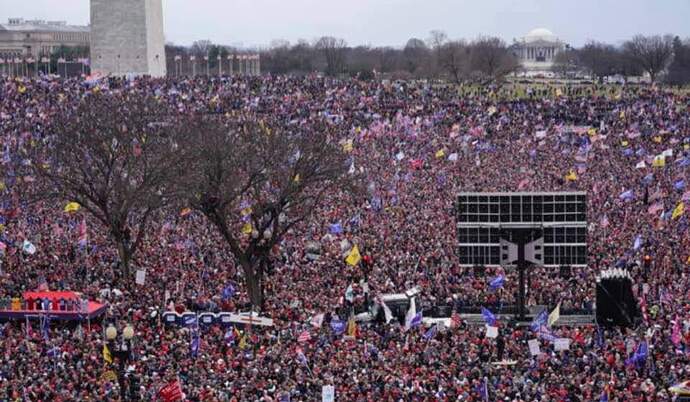 Just a quarter of them?

Capitol police are charged with securing the building I thoght the SGA’s responsibility ended at the chamber doors?

The Capitol Police report to the Sergeants-at-Arms.

The SGA’s would likely be dead along with the possibility of some of the members they are supposed to protect.

That’s a picture of rhe rally at the White House - and I’ve been assured that an entirely different group of people stormed the Capitol.

Apparently they couldn’t possibly have gotten there in time.

What do you think would have happened had they tried to stop them?

The failure wasn’t that they didn’t stop them.

It was that they weren’t prepared.

Can you provide a link to their organizational chart? I’m not seeing it.

They were going on at the same time separated by 2.5 miles.