It is my home state of Indiana. Our Governor has done a horrible job. I have some representative graphs and charts from the AARP dashboard. From my own following of COVID numbers in my home state…Up until the past month I knew that more than half of the deaths in the State have come from Long Term Care facilities. That number right now as of today sits at 49.6 percent. Monthly snapshots of COVID's infiltration into nursing homes and its impact on long-term care residents and staff at the state and national levels. 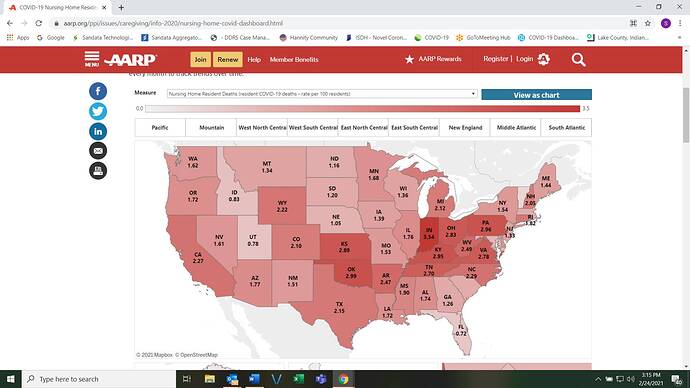 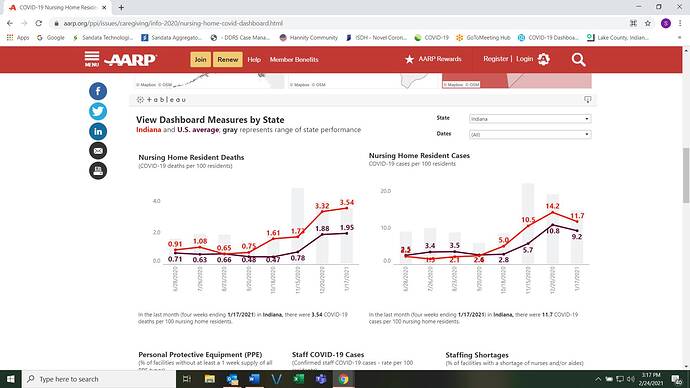 Compare that to New York… 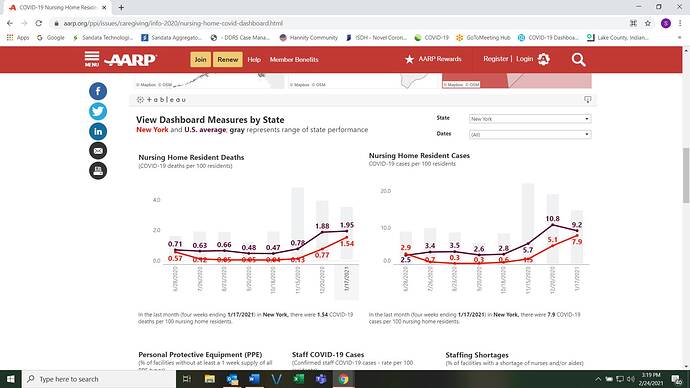 Cuomo may have screwed the pooch back in April and May, but figured things out quickly. Not giving him a pass…but look at the drastic difference.

In Indiana, our Governor, Eric Holcomb, had things going great. On September 25th, he moved the state to wide open…Leaving no protections for nursing home residents, nursing homes were short staffed, people were forced to work while sick, and PPE equipment was drastically low. See next graph… 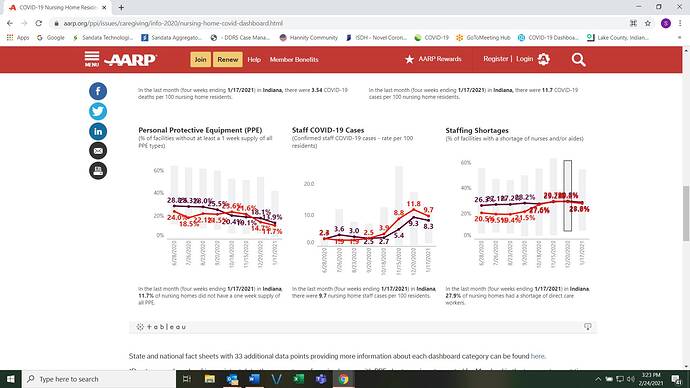 This shows the lack of preparedness shown by Governor Holcomb and the State as a whole. At 3 different times nearly 25% of all nursing homes in the state did not have a one week supply of PPE for staff. During 4 different times our state had over the US average of nursing home staff who were COVID positive. All during the fall and winter wave. So while staff were being infected with COVID 19 from October through January…The State and the Nursing Facilities did not have enough PPE on hand to protect staff working at these facilities.

This is a glaring under sight by our Governor Eric Holcomb, who Up until September I thought was doing a great job of handling this crisis. However, in an election year, feeling pressure not just from a democrat but also a libertarian running for Governor…and a strong base of vocal Libertarian Critics, one month before the election Holcomb opened the state up completely with the hope of satisfying angry republican voters who wanted the State Opened up for Business. What follows was the start of a climb of cases that took my county from 20 to 30 cases per day to 300 to 600 cases per day. And it led to a period of unprecedented Nursing Home deaths. At one point in December, The Indiana National Guard had to be called in to staff nursing homes, because so many staff were sick, or had just quit.

It is a bitter pill to swallow for me to see this kind of incompetence? Or lack of leadership? Or lack of active planning. I run a sort of long term care facility. It is assisted living for people with varying developmental disabilities. I have between 100 and 110 staff at any time. We followed the states early guidelines for COVID 19 for Nursing homes…And we did really well. Through July, of 85 residents I had 7 with COVID, 1 serious case…through November I added 4 more. Of the 100 staff we have had 25 who were infected. After the initial 5 staff who got it from residents the rest got the COVID from outside their facilities where they worked…

As a professional in the field of Public Health and an administrator of a facility like mine, I can’t understand why this was so hard. There were some facilities like mine in the state that simply abandoned residents because they could not provide adequate staffing, so they dumped them on another facility and put them up in a hotel. I picked up two residents from this facility. So did others.

I guess my issue is this, while states surrounding Indiana did so much better in this area of Long Term Care, why did Indiana fail so horribly. I have to blame our Governor for some things…like ending his partnership with Governor Pritzker of Illinois…we share so much back and forth along our shared border, it made sense to work with him. Instead in September he opened up Indiana for business, while Pritzker was shutting things down in his state. So what happened? In my area, adjacent to Chicago, people flooded across the border to come to our open bars and restaurants because theirs were closed. This was the start of our increase in cases. As a Hoosier I had to quarantine for 14 days if I traveled to Chicago on business or vacation. But they could simply cross the border…with out a word being said.

Not having enough PPE in our supply chain for our hospitals, Nursing homes and Long Term facilities. Huge issue. I personally acquired over $2000 worth of PPE for my programs though Ebay and Amazon. We always had a more than enough PPE on hand. What happened at the State level? The State Department was woefully un prepared for this second third wave in the fall. When I had conversations with my contact at the State Department of Health, she made the offer of sending us supplies. 100 masks, 2 gallons of hand sanitizer and 50 PPE gowns. I laughed and told her to send it someplace that needed it. We were fine. I had shields, we still have over 1000 masks left, and we had rain Parkas for PPE…don’t laugh…it worked. I still have over 10 gallons of sanitizer left.

Supplies were available, some facilities just didn’t have the wherewithall to get them or find them. Which is inexcusable. Indiana is quickly becoming the Arkansas or Mississippi or West Virginias we used to make fun of…because they were 48, 49 and 50…Well…Here in Indiana we’re number 1…we’re number 1. In Nursing Home Deaths.

Discuss among yourselves…Tell me what your states have done. Have you had anyone in a nursing home? Discuss the conditions if you want to.

I personally was shocked to see how poorly my state has done with this population. I have watched the Governors weekly addresses since July, I have been involved with meetings with health officials, I have passed on how we have protected staff. And yet here we are Indiana. Great job at failing.

Sorry this is so long…I am not a word wall guy…but I have too much to say…on this subject.

If you want him out, vote him out. If he cooked the books and lied, impeach him.

Couple things that stand out…just how many deaths in NY has Cuomo covered up?

Also Fla. Fla really stands out for me considering the amount of elderly population they have. Lowest in the country.

Also…AARP do have a political agenda. Not sure you can trust their source. Again just speaking out loud here.

I hear that fellow who runs Purdue was a good governor - maybe he’s up for the job?

Couple things that stand out…just how many deaths in NY has Cuomo covered up?

Also Fla. Fla really stands out for me considering the amount of elderly population they have. Lowest in the country.

Also…AARP do have a political agenda. Not sure you can trust their source. Again just speaking out loud here.

It was, wasn’t it. Excellent op.

While I don’t have the numbers, we in Texas did a piss poor job of protecting our elders as well.

I’m going to try to source it against the Indiana State Dept. Of health dash board…but like I said…the nursing home death toll stands at 49.6 percent of total deaths. That is horribly high

This is strictly NURSING Home LONG TERM CARE numbers not retirement homes or communities. That is the AARP dash board. For LTC facilities

I have known we did a poor job here…i didn’t realize just how bad til today. 20 to 25 percent of facilities not having a weeks worth of PPE? That’s criminal.

I have known we did a poor job here…i didn’t realize just how bad til today. 20 to 25 percent of facilities not having a weeks worth of PPE? That’s criminal.

Ok, but is that the governor’s fault? If it is impeach him. Somehow I doubt the governor of Indiana is responsible for PPE in a nursing home.