State of Union speech to go on

Seems like Trump is going to exercise his Constitutional duties at the people house.

He shall from time to time give to the Congress Information of the State of the Union, and recommend to their Consideration such Measures as he shall judge necessary and expedient; he may, on extraordinary Occasions, convene both Houses, or either of them, and in Case of Disagreement between them, with Respect to the Time of Adjournment, he may adjourn them to such Time as he shall think proper; he shall receive Ambassadors and other public Ministers; he shall take Care that the Laws be faithfully executed, and shall Commission all the Officers 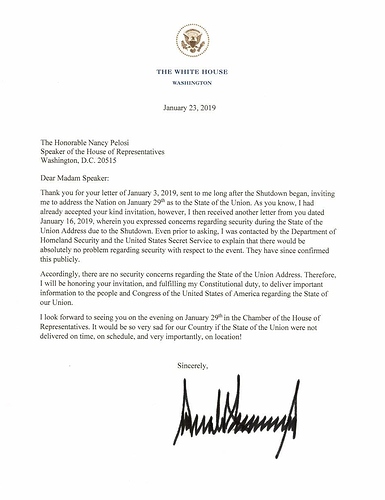 What will old sourpuss do…sit behind trump and make faces entire speech?

He’s not required to personally go before congress.

Typical of Trump to thrust himself into a situation when a woman says no.

Nor has he been legitimately invited.

She will look like a fool to the American people ignoring the illegal immigration problem.

Nor has he been legitimately invited.

Nancy should order the Sargent at arm to lock and bar the door.

If he tries to enter, I hope they have his ass arrested for trespassing.

In the people house?

“No means no” -Pelosi

Grab 'em by the podium!

Not an expert, but if she adjourns for the day, she has every right to keep him out.

In the people house?

A majority of the people didn’t vote for him.

I see…so it’s not the people house.

Trump should have Piglose locked up for ignoring the illegal immigration problem.

Typical Trump showing up in places where he is not wanted. Like the changing room for the Miss Teen USA.

It’s the house of the representatives of the people

I see nothing has changed.

It is the people’s house. Not Trump’s.

I see nothing has changed

Yes, fat Donald is still an idiot.
BTW, fat Donald can’t give the SOTU in the House chamber without the consent of the House.