Romney's Head On A Spike? 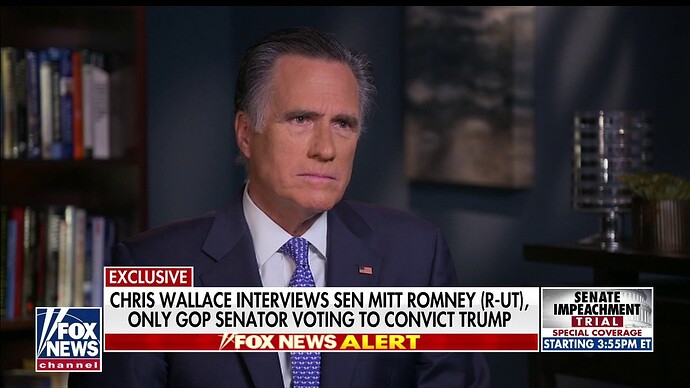 Can Mitt Romney actually be expelled from the Republican Party?

As Sen. Mitt Romney, R-Utah, voted Wednesday to convict President Trump on one of the two articles of impeachment against him – abuse of power – Trump's son Donald Trump Jr. was already calling for Romney's expulsion from the...

Republicans gasped at the claim this would be a consequence of voting for conviction. How dare Schiff suggest such a thing!

Yet, now all the talk is about expelling Romney from the party.

Head on a spike indeed

BabyTrump Jr should totally go down this road.

How can he be expelled for being independent and actually standing for something instead of siding with a bunch of scared bitches in the GOP senate? Don’t get me wrong, he still has sided with the president on almost everything so he’s definitely not some hero, but I give him props for growing a pair.

Donald Trump Jr is not the decider of who is a Republican.

When the son of a President says stupid things, I suppose it is newsworthy to the President’s opponents, so I get it.

I would think that with all the people who have fled the Republican Party in the era of Trump, they would be seeking to hold on to whatever remnants are left.

Let Romney’s constituents decide his fate. This is not a job for the Republican party due to his vote.

What will Mike Lee do? From what I see he is a pretty staunch Trump supporter.
Will Trump try to pressure him to go after his fellow Senator?
From what I have read there seems to be mixed feelings in Utah for what Romney did.

Can Mitt Romney actually be expelled from the Republican Party? | Fox News

Republicans gasped at the claim this would be a consequence of voting for conviction. How dare Schiff suggest such a thing!

Yet, now all the talk is about expelling Romney from the party.

Head on a spike indeed

“Nope, not at all,” Sen. Lisa Murkowski, R-Alaska, said in response to a question asking if Romney should be expelled from the party.

“I think Mitt’s decision was a mistake,” Sen. Ted Cruz, R-Texas, told reporters, before adding that he had no hard feelings toward Romney.

And to top it off McConnell made it clear there are other votes he will need in coming year.

People of Utah will make the decision whether to keep their political traitor.

So long as Trumpism dominates the GOP Romney doesn’t have a home there anyway.

Yup, and until then the GOP needs Romney.

Loving the new found love for Mitt Romney from the democrats looks like he might even get a spot on the Ellen show like George Bush jr, a beloved hero to the left that at the time they wanted to be tried for war crimes before the Orange man bad

When the son of a President says stupid things, I suppose it is newsworthy…

This talking point is pretty lame

He’s come a long way from the dog torturer he used to be.

This talking point is pretty lame

So was the impeachment, but here we are.

Hell, Donald has people wistful over Dubya and Cheney. He’s just that deplorable.