This article was in American Thinker back in March, when the movie “Red Sparrow” was released.

I just watched the film which just was released for cable rental. The movie didn’t make money at the box office and didn’t get good reviews. Obviously the movie was essentially boycotted, because of Jennifer Lawrence’s immature anti-Trump comments, typical of Hollywood naive Trump hate.

The movie is ridiculous anti-Russia, over the top propaganda. The leftist propaganda wants the return to the throwback “cold war,” hysteria, mentality. It portrays Russia as the worst enemy, echoing the Leftist, Globalist, view we have heard from the most hawkish views from some of the establishment Rightwing and most all the extremist Leftwing.

Trump’s campaign was based on sorting out and fixing existing roadblocks to peace.

Years ago the Left loved the Soviet Union, now since Russia threw away Communism the Left hates Russia. For example, Bernie Sanders loved Russia and even went to Russia years ago, for training. During the 50’s Hollywood Communists praised the Soviets, leading to the McCarthy hearings and the “blacklist,” etc.

My how times change. Now the Leftists and Hollywood hate Russia. Fake “Russian Collusion,” hysteria, is being pushed by Leftists because Trump made it public he wanted “great relations with Russia” if he could get them— so did American voters.

The Left are nuts about Russia.

The left, the EU, the Globalists, had in their plan, to get Ukraine into the European Union. Russia still had and has a strong connection among the people with especially Crimea and many within the Ukraine. Putin became the enemy of the Left. Trump and Putin are demonized by the Left who dispise strong, middle of the road, popular and populist, patriotic anti-communists.

The Communist, Globalist left are the enemy to world peace and they have no conscience. Trump is damaging their dreams of Globalist, Paranoid Schizophrenic plan. The are a throwback run by Neanderthals.

So “Red Sparrow” is a ridiculous, propaganda film.

The Irony of the Leftist Obsessions is beyond belief.

Russia’s biggest mistake was going Commie. They have an incredible history and culture. Great literature, music, everything. Great people The left is like “How dare Russia betray our dream of a Communist One World, run by us?”

Destruction of Great culture is always the Leftists calling card.

Red Sparrow, despite some decent perfrmances, is a total fiction, designed to rekindke cold war mentality.

The left hates that Trump is actually seeking peace and breaking down old barriers.

So let me get this straight…

Let’s start at the beginning. What makes it obvious the movie was boycotted? I never heard a single thing about it being boycotted or anyone making an issue of any statements and this movie.

The movie made $147,988,192 world wide on a $69 million budget. Even if you take the big tent poll idea to double the budget for marketing, it still made money. 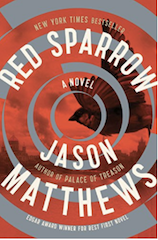 Red Sparrow is a novel written by Jason Matthews, a former Central Intelligence Agency (CIA) operative, published by Scribner on June 4, 2013. The book describes the mundane aspects of the intelligence field, the techniques it employs, and Red Sparrow's unique ability to discern the nature of people by seeing their emotions in colors (through synesthesia). Dominika Egorova, or "Red Sparrow", is a former Russian ballerina who is forced by her uncle to undergo espionage training for the Russian go...

Not sure if the OP didn’t realize that this was not just some Hollywood creation, but rather was based on a novel written by a former CIA operative, calling on his experiences in modern day intelligence gathering techniques.

You should have. You didn’t. It made money.
It wasn’t great. Sounds like Jennifer Lawrence was the one bright spot behind some bad writing and thing character development.
Who boycotted this by the way? I mean, not going to a movie just because isn’t boycotting, which is sounds like what happened?

The reviews I read basically focused on the idea that the movie wasn’t what was sold - rather than being a high-tension spy thriller, it was more of a somewhat depressing and upsetting sexual drama.

I don’t recall any “boycotts”, and Jennifer Lawrence is still one of the most bankable female movie stars right now.

I was amazed how fast lefties become war hawks…

Kept sounding like it was possibly the Black Widow movie we always wanted but wasn’t that at all.

Do you ever post something relevant to the topic at hand?

Rather than exciting action thriller, it was an uncomfortable sexual drama.

It was just another random, below-average spy thriller. They’re a dime a dozen. Not only was it critically panned, but it was generally received pretty mildly by audiences (B at Cinemascore, 53% recommend it at RottenTomatoes).

I see A LOT of movies (especially since I subscribed to MoviePass over the winter), but I didn’t check this one out, even with J-Law.

I don’t think its lack of success hd anything to do with anything other than it being a sort of ok book adaptation in a genre we already get plenty of.

Do you ever post something relevant to the topic at hand?

I didn’t go to see it because the trailers didn’t look that interesting. Never heard anything about a boycott.
And Jennifer Lawrence got $20 million to do the movie. So she cried all the way to the bank.

This is not a movie review at all. The movie is terrible, even most leftist movie critics panned it.

Obviously I am not reviewing the movie. I am talking about Leftist antiRussia propaganda.

Putins popularity in Russia is in the 80+ percentile. They love Putin. Many Russian American love and respect Putin. I doubt leftists here have any clue what Russia is really like. They read leftist media propaganda everyday.

Crimea referendum to rejoin Russia was 95.5 % in favor.

The propaganda is thick.

Wow, you are a lost cause. Your undying love for Russia is concerning.

(Also, yes, the movie got panned. Even whatever you think leftist movie critics panned it, which doesn’t make sense. If Hollywood and leftist want to promote this anti-Russian movement against the pure and wholesome Russia, why would they pan the movie?)

Putins popularity in Russia is in the 80+ percentile. They love Putin. Many Russian American love and respect Putin. I doubt leftists here have any clue what Russia is really like. They read leftist media propaganda everyday.

Crimea referendum to rejoin Russia was 95.5 % in favor.

And the 0.1% disapproval was just an error in understanding the polling question.