Senate strikes down proposal to spend more on election security

States will not get additional funding to help secure the upcoming midterm elections. The Senate on Wednesday rejected a proposal that would have provided more money for states to ramp up security efforts, The Hill reports. The amendment to an...

Hey, well, it would have cost $250 million (that’s million with an m). You think we’re made of money?

Maybe trump can sacrifice a little bit of his golf outings and give to the cause. 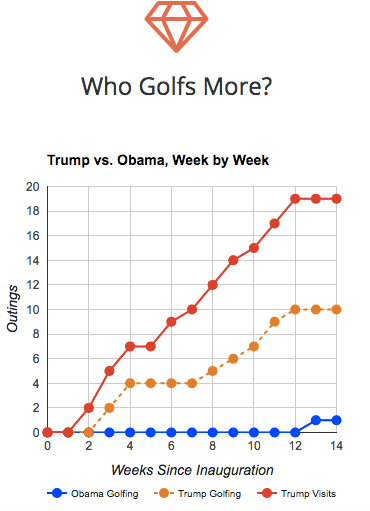 Trump Golf Count: Tracking President Trump's golf outings so you don't have to!

I don’t see anyone kissing China’s ass, though. Only Russia’s. Why is that?

I wouldn’t start a war over it. The rhetoric from the left is insane and inappropriate for what took place. The left is leading with their emotions and feelings instead of using their brains…and are insane.

That is one mighty tall strawman you have erected. Full of straw and horse feces.

They have the shirts to prove it. Hopefully more and more of these “Trump patriots” wear these shirts to his rallies.

These people would rather be Russian than an American from a different tribe.

This has always been my theory. 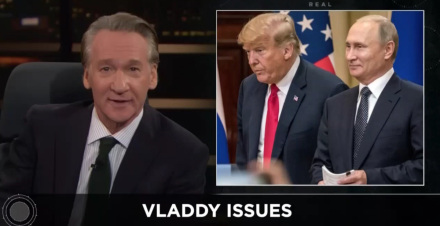 Bill Maher: Race Explains Shift From Party Of Reagan To Party Of Putin

UPDATE, with video The “dirty little secret” that explains how the Party of Reagan morphed into the Party of Putin is a four-letter word, Bill Maher said tonight: Race. “Russia,&#…

Rand Paul 2014: ""The real problem is that Russia’s President is not currently fearful or threatened in any way by America’s President, despite his country’s blatant aggression. But let me be clear: If I were President, I wouldn’t let Vladimir Putin get away with it."" Rand Paul today: “Dialogue is especially important when hundreds of millions of lives are at stake, as is the case in relations between the United States and nuclear-armed Russia. So I applaud Trump for both chiding our NATO…

I was honored to deliver a letter from President Trump to President Vladimir Putin’s administration. The letter emphasized the importance of further engagement in various areas including countering terrorism, enhancing legislative dialogue and resuming cultural exchanges.

WTH is going on here?

Why did Obama allow it to happen?

Russia doesn’t want peace they just want governments that won’t oppose their actions in countries that were part of the Soviet Union.

They also don’t want to hear about their treatment of minority groups.

It’s not a matter of allowing it to happen, it’s a matter of not giving a ■■■■ about it happening until it provided them an excuse to “resist” the incoming administration. Had Clinton won, this whole Russian issue would have been a footnote.

It’s not a matter of allowing it to happen, it’s a matter of not giving a ■■■■ about it happening until it provided them an excuse to “resist” the incoming administration. Had Clinton won, this whole Russian issue would have been a footnote.

In that meeting, which takes place in September, finally, by then the CIA is convinced that the … Russians are interfering in the election and not just playing to create chaos, which was the first theory, and to kind of undermine the idea of democracy. … But the CIA becomes convinced by the very end of the summer that the Russians are actually trying to help Trump, which is what Steele has been saying all the way along.

So the CIA then briefs the top leadership in Congress in both the House and the Senate and the intelligence committee members of this, and Obama is hoping that he can get these leaders on both the Republican side and the Democratic side to sign some kind of statement denouncing it and telling the public about it and warning everybody, all the election officials in all the states that are going to deal with the upcoming presidential election. But the Republicans, particularly Mitch McConnell, refuse to sign on to a bipartisan statement and [McConnell] won’t sign anything that specifically mentions the Russians. He says he doesn’t believe it and he just won’t do it.

This is a real problem for Obama, because he had been wanting to have a bipartisan statement so that he and other Obama administration officials wouldn’t be accused of playing politics with this thing, this bombshell having to do with Russia, but McConnell refuses to sign it, and so the Republicans won’t do it and so at that point Obama just decides not to say anything.

nobody really pays attention when an attack fails

As soon as the Democrats regain power, they’ll forget all about those evil rooskies and go straight back to their old playbook.

#Russia's state TV is pretty specific as to why they consider Rand Paul "a loyalist": 🔻Voted against Russia sanctions 🔻Voted against Montenegro joining NATO 🔻Supported Trump's performance at the #HelsinkiSummit ©️ twitter.com/JuliaDavisNews…

Not yer daddy’s GOP, these days.