This is pretty basic and simple. In the final few weeks of the 2016 campaign, Trump buckled down, changed his incendiary tone, and focused heavily on his goals for a first term, should he win. He campaigned heavily on repealing and replacing Obamacare, the economy, trade deals, eliminating regulations, etc. And we know the end result.

So the question is this. Are you pleased with the way Trump has conducted himself in the closing weeks of this election? Do you feel he has done as much as possible, from a political standpoint, to give himself the best chance imaginable to win here in 2 weeks?

If yes, then please list some of the campaign strategies you have been most pleased with.

I think one major deficiency this cycle is health care. Trump capture a lot of support and soothed concerns of ?self interested? people with his re-assurance in health care. It was going to be bigger, better and cheaper than Obamacare and without doubt government is going to “take care” of everybody.

That was a big departure from the Republican position and opened up support from people who want government regulation and support in health insurance.

This time around there is lip service to pre-existing condition guarantees, but obviously no serious effort to create a comprehensive heath care policy.

Also Obamacare is less of a motivator. Hard to argue it is an economy strangling mega job killer when we had the planets best economy ever in its 8th-11th year.

Not quite an on topic answer, but I watched the position change from government get-out to we can get-in better with astonishment and a level of satisfaction with the direction.

I would not have backed out of the virtual debate. I would have negotiated a deal to give each campaign a little oversight to prevent shenanigans. Then debated.

I guess my political stance qualifies as nihilist, because I believe we’re damned regardless of who wins. Out of all issues, Trump’s bout with covid-19 was a major turn-off to me. Rather than shrugging it off as “no big deal,” he could have used his recovery to pivot on a weak issue. Instead, it was right back to rallies and disregarding protocols, and I personally know Republican senior voters that saw that as their “enough” moment. Prominent Republican pollster Frank Luntz blasted President Trump and his campaign on Tuesday for focusing on Hunter Biden in the stretch run to Election Day, calling Trump’s campaign the worst he’s ever seen and saying the president’s advisers sh 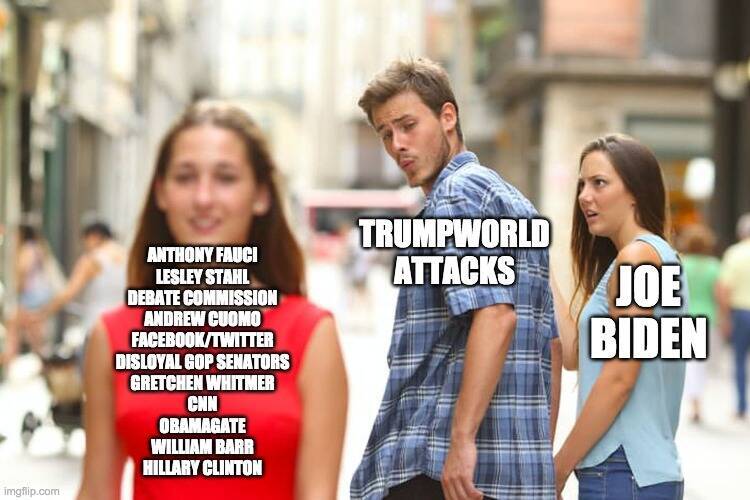 Luntz said Hillary would win. I haven’t taken him seriously since.

He is a pollster. He should keep his opinions to himself, IM(not so humble)O.

Irrelevant. The choice is between a conservative and a liberal. Conservatives (never Trumpers aside) will vote for Trump and Liberals will vote for Biden. All of your platitudes won’t amount to a hill of beans.

There are plenty of other threads if this one isn’t of interest to you.

Either you would like to comment or you wouldn’t. I see it’s the latter for now. No worries.

I tend to agree. Hillary’s emails didn’t sink her and Biden’s son is a non-issue with the voters that matter.

Nope, but the “proggie left” needs to be run out of the country on a rail.

) Biden jumped in bed with them, as did you.

Notice the video is fake. These people have no shame. We heard what Luntz had to say…it was the opposite. I guess “The Hill” knows they are over.

As much as Frank Luntz is a total hack, he’s right that the only chance Trump has is to score an early round KO in the final debate and that’s still just a chance.

I tend to agree. Hillary’s emails didn’t sink her and Biden’s son is a non-issue with the voters that matter.

You are badly misreading the attitude on drug addicts in 2020. This isn’t 1998. The opioid epidemic is in the suburbs. Everyone has a kid who got strung out or knows someone whose kid did.

Or a parent for that matter. Sneaking addiction into legitimate medical treatment caught a lot of unsuspecting grown ups in its net.

I asked if you were happy, content, pleased with Trump’s closing push in the election this year or not?

If you were, then what specifically were you impressed with? If not, then what would you have preferred?

Everyone else seemed to have an easy enough time with the question. Weird, right?

Surely you have an actual opinion of your own on the political state of the Trump campaign and this election, don’t you? I’m not asking for who you think will win. Who you want to win. Just a simple question about your take on how good Trump has done this year in the final stretch, especially compared with 2016 when he showed significant discipline in the closing weeks.

If you can’t answer, it’s okay. Just say as much.

Or a parent for that matter. Sneaking addiction into legitimate medical treatment caught a lot of unsuspecting grown ups in its net.

My point is they think the junkie son is some kind of slam dunk-and it would’ve been in 1996-but they’re trying to burn Biden by showing him as a supportive father to his ■■■■■■ up middle aged son? This is something that over-65s can ■■■■■■■ relate to.