No surprise at all. Of course they’d confirm a SCOTUS nominee now. As opposed to the same situation under Obama. We can officially stop using Biden as a scape goat. Ugh. This makes my blood boil. At least try to look consistent. 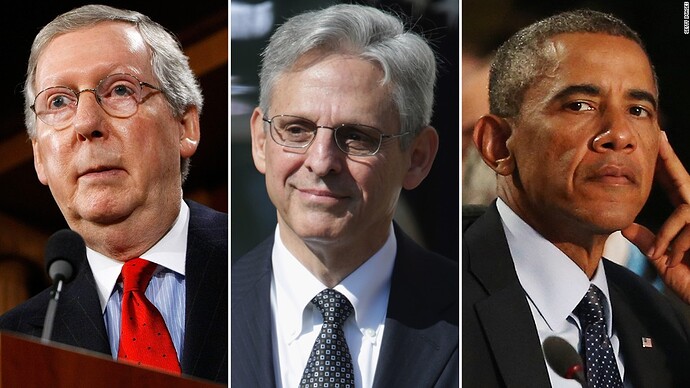 In reversal from 2016, McConnell says he would fill a potential Supreme Court...

Senate Majority Leader Mitch McConnell said Tuesday if a Supreme Court vacancy occurs during next year's presidential election, he would work to confirm a nominee appointed by President Donald Trump.

We all knew this.

Good. It’s what the dimocrats deserve for the kavanaugh sideshow debacle they put on. Not to mention all of the other obstruction, and parlor games.

And dimocrats talk of impeaching kavanaugh, and packing the court.

So…the Biden principle is now even, steven. Are libs now asking for it to continue? I’m so confused?

Shocked I tell you.

Like any abusive relationship, it’s always the other person’s fault.

What a damning indictment on the crass nature and character of McConnell.

With McConnell/Republican’s attitudes, I wouldn’t blame the Dems if they did pack the court.

With McConnell/Republican’s attitudes, I wouldn’t blame the Dems if they did pack the court.

Every administration tries their best…it’s the American way.

If you’re confused, it’s because you chose to believe that there was such a thing as a “Biden principle” that had any weight on seating justices.

The “Biden principle” would have resulted in Garland getting an up/down vote. It wasn’t followed in 2016. Baaaaaaah!

Nor was it used in 2016. The “Biden principle” would have seen an up/down vote on Garland after Trump was elected but before inauguration. Even if the vote were no, he would have gotten the vote. He didn’t get a vote.

Fox and R politicians forgot to tell their followers about that part.

And that’s politics in today’s world.

Libs will get their day at the helm, and it’ll happen then too.

This is exactly what many of us said it was back in 2016. We knew Mitch was being a dirty, rotten hypocrite. We knew he was violating what he once wrote as a law clerk, when he stated that the politics of a SCotUS pick were the president’s prerogative, and that it’s not the senate’s job to consider the politics.

We knew the Biden Rule explanation was ■■■■■■■■■ If it were truly being followed, Garland would have at least gotten an up/down vote.

There was no escalation to this. There was no precedent for this, especially since any of us have been alive and then some.

McConnell, GOP pols, and right-wing media made up every reason they could to justify Garland not even getting a hearing, much less an up/down vote in 2016. And then McConnell drops this deuce.

LOL, look at the libs crying.

Hey guess what. If by some chance Trump loses in 2020 and the GOP holds the Senate?

We aren’t going to allow a single judge or cabinet position to be filled either. Suck it libs.

Always nice to see someone stand up for principles and decency. Oh wait, it’s “win at all costs,” I forgot. Would you treat people in everyday life like that, or is it just a guiding light for your political views?

That would also not be surprising.