The destruction of statues that we are witnessing is modern day book burning. They’re not different then those in first half of 20th century in there justification when they did those crimes against knowledge, art and humanity.

The so called “intellectuals” are spurring it.

My son and just had this conversation. Books are his life. I asked him if tearing down statues wasn’t the same as book burning.

It’s not similar as monuments and book have mostly different functions. I’m fine with books about Confederate generals.

Explain how one is offensive and the other is not?

The fruit of sanctuary cities has ripened.

Stand for nothing…Fall for anything.

There are some pretty major differences between burning Harry Potter because someone thinks it promotes witchcraft or Satanism and taking down statutes that suspiciously went up because of the Lost Cause myth and during the Civil Rights era.

One of the other differences is that books aren’t given center stage in public places. If, for example, a Jewish American goes to the library, the only way they’d get offended by Mein Kamp is if they specifically go and search it out or ask for it by name. The statue of a traitor soldier, on the other hand, is given center stage in some parks or plazas.

It is as though the effort is to disrupt rather than discuss an issue with a public statue…erected by politicians.

Most if not all of the statues being targeted went up long before the civil rights era.

From your own link. 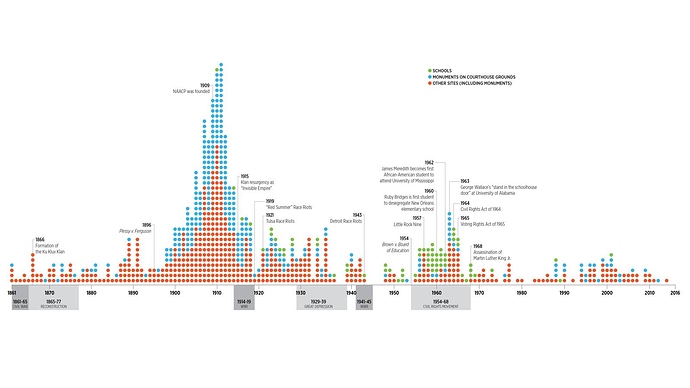 A literal handful went up after 1955.

They aren’t interested in discussion. If you get in their way at all “you’re a racist”.

So where are the artists to defend the sculpture?

The hacks with spray paint are not artists.

Most if not all of the statues being targeted went up long before the civil rights era. Most went up between 1900-1940. From your own link.

Thank you for clearing up a misconception that I didn’t have, because I didn’t claim most of them went up in the Civil Rights era.

All things considered, it’s a pretty minor part of my post, since my point doesn’t rest on when the majority of them were erected, but when they were. Also, it misses what I think is another key difference between a random book and a traitor statue is that they serve quite different functions - the book is to entertain or inform. The statue is was either raised to intimidate others or because the United Daughters of the Confederacy were trying to rewrite history.

It is as though the effort is to disrupt rather than discuss an issue with a public statue…erected by politicians.

I didn’t respond earlier, because I wasn’t notified your comment was a response to me. So please ignore WildRose’s wild and unsubstantiated claim about my argument.

Anyway, I don’t know how to answer your question because I’m not sure on what term’s you’re approaching it. For my part, I’ll say that I don’t think the statues should be destroyed, they should be removed by authorized public officials. The issue, of course, is convincing public officials that the statues do more harm and good and glorify people who fought to maintain slavery.

I read you correctly and responded appropriately.

… .and taking down statutes that suspiciously went up because of the Lost Cause myth and during the Civil Rights era.

All things considered, it’s a pretty minor part of my post, since my point doesn’t rest on when the majority of them were erected, but when they were.

This is of course nonsensical drivel and self contradictory.

We all understand what The Confederacy was and that slavery was a major reason for it’s creation.

It’s part of our history, trying to purge it from the public consciousness will never be productive.

Whether you can accept it or not people served not to protect the institution of slavery but to defend their states.

Prior to the end of the War, “The United States” as we know it today did not exist. People’s first loyalties politically were to their states, not to the US and their states were under attack so millions on both sides enlisted because they saw that as their patriotic duty.

The war ended a hundred years before the civil rights era really started to get up a head of steam, we know that and we all know the south lost.

Many families like my own had members fighting on both sides of the war and they fought for the same reasons and those who served honorably still deserve recognition.

I know something of the Sons and Daughters of The Confederacy, no they aren’t trying to rewrite history they are simply attempting to preserve it and to honor those who “Fought for the cause” and did so honorably.

We live in a completely different world today and a totally different country. Today most of us at least are Americans First and state loyalties are mostly a thing of the past.

Today we understand through the advancement of science that much of the beliefs of people of that era were simply wrong, particularly the superiority of one race vs others.

Somehow we’ve managed right up until very recently to accept all of that and remain united as a nation.

Democrats saw these statues as yet another wedge issue to drive Americans apart and they are doing all they can to accelerate it because it’s an election year in which the sitting Republican President is going to be very difficult to beat.

It’s also being exploited as a wedge issue specifically to enrage blacks because of all the great gains made by Black Americans during this presidency and the fact that he could manage between 12-15% of the black vote in our major metro areas it will be all but impossible for him to be defeated.

It is a third world frenzy… Unworthy of consideration.

When we can talk like adults…I can agree to change some things.

It’s part of our history, trying to purge it from the public consciousness will never be productive.

Removing statues =/= “purging” history. Germany has outlawed Nazi iconography, yet they are very well aware of their history.

I’ve cut out the large part of your discussion on the soldier’s motivation to fight for the Confederacy or the Union, because that’s not at all relevant to the discussion. The statutes were erected after the War, by groups that were promoting Lost Cause mythology and intimidating black Americans. Their reasons for erecting these statutes is important, not whether or not John C. Smith from Mississippi personally owned slaves or had some national loyalty.

I know something of the Sons and Daughters of The Confederacy, no they aren’t trying to rewrite history they are simply attempting to preserve it and to honor those who “Fought for the cause” and did so honorably.

United Daughters of the Confederacy - Lost Cause and Neo-Confederate views

The Charleston church shooting, the Unite the Right rally,, and the recent killing of George Floyd highlighted racial tensions.

I reject the rest of your comment, because it seems founded on the assumption that these statutes were not issues at any prior moment in history, and only recently became issues because Democrats saw them as political tools.

Please point out to me where in my response to you I did not act like an adult.

Thanks to the frentic action.

The timing is curious. The case needs to be made for each monument.

Please point out where I stated you didn’t.

I was referring to the mobs attacking defenseless statues…like children playing with toys.