How come biden/obama and the vaccinated liberal establish are wearing masks?

The irony of that part of the post was deliberate, and hopefully not lost.

It’s been checked, across a plethora of sources, from last winter to now.

The only reason their recommendations are being challenged is feeeeeeeewings about assumptions.

It’s been checked, across a plethora of sources, from last winter to now.

The only reason their recommendations are being challenged is feeeeeeeewings about assumptions.

So arguing just to argue at this point. Boring.

Yet expectant mothers to the tune of hundreds of thousands have received the vaccine. Are you expecting these babies to be born with 5 testicles or something?

I don’t know what things used to be like in the early 1900s, but in the year 2021 we have this pretty amazing neonatal technology that lets doctors monitor the safety and health of an unborn infant.

Are you really trying to convince me that out of the hundreds of thousands of pregnant women who have been vaccinated against covid, every single one of their neonatal doctors is in on a conspiracy?

You are talking as if mrna vaccinations or vaccinations in general are some new medical technology that was just invented in December 2020.

Well that means it doesn’t kill the fetus but that’s about it. Says nothing of possible long term effects.

Wait, you really believe that? No, Trump focus was to rush to reopen because UV, warm outdoor temps, and bleach would make it all go away because it was a fake news hoax mild flu that would be gone soon. He threw some cash at the vax, and once it was finally available, let everyone else like Obama and Clinton and Bush and Carter do all the work of actually trying to get people to take it. Remember how they got the vax for all to see and were part of ad campaigns to get people to vax and meanwhile, Trump was nowhere to be found, other than taking credit for it. He barely lifted a finger to actually get people to take it.

You seem to have forgotten Operation Warp Speed, which resulted in three extraordinary effective vaccines in one third the time that most high priority vaccines take to develop.

And you also seem to have forgotten that he was no longer President when the roll out hit its stride (they were only vaccinating about a million people a day on Inauguration Day) and that Trump also appeared in several “get vaccinated” ads, but Biden did not enlist him to hawk the vaccine as he did with Bush and Obama.

This is not worth a comment from me. Except that I did not laugh at David Letterman jokes

Liberal elitists believe rules are only for lesser people

Not accurate that Trump supporters are eschewing the vaccine.

Oh really? In graphic below, green is unvaccinated, blue is vaccinated. 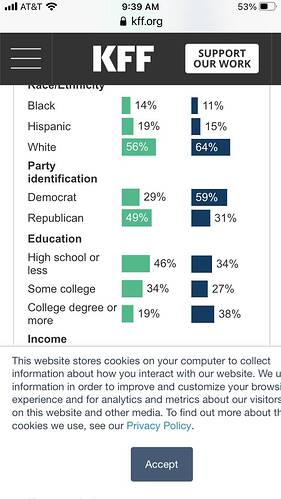 Got anything newer than this information from May 2021?

Didn’t forget either of those. They were literally addressed in the post to which you responded. Read more carefully.

Read he says… Depends on one’s definition of addressed.

Didn’t forget either of those. They were literally addressed in the post to which you responded. Read more carefully.

Yes, and you ignored them. Or rather kissed them off as though they were insignificant or never happened.