Conservative beat up at Berkeley. No Free speech on campus?

I’m sure CNN reported over and over the hate crime caught on camera at Univ of Berkeley the other day. God for bid conservatives try to have free speech at Berkeley. They must know who the guy is and yet he’s still free. 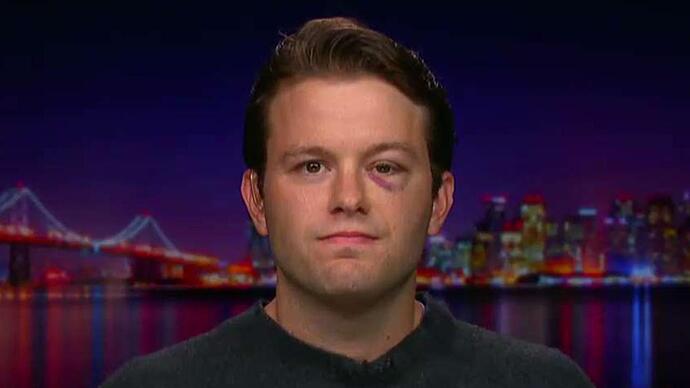 Conservative activist Hayden Williams appeared on “Hannity” Thursday night where he addressed the violent attack he experienced Tuesday on the campus of the University of California at Berkeley.

Saw this on Twitter. Dude needs to go to jail for assault and also his threat to shoot the activist.

Do they know who the guy is yet? I hadn’t seen that on any of the threads I was following.

Yeah, I’m sure they did report it.

Looked like a student doing the attacking. Should have been arrested yesterday… But somehow, I think they won’t be able to find him.

Kind of like San Jose police forcing Trump supporters into the attacking mob during the election.

That was straight up assault.

Dude should be in jail

This is about conservative treatment all over the county as well as Berkeley, so it’s national politics. Moving it to “outside the beltway” is wrong. Please return it. Thanks.

That is clearly assault, he should be charged and sent to jail.

Granted… having a sign that is a reference to Jussie Smollett and then “This is MAGA Country” probably wasn’t the smartest tact to take for recruitment… but he shouldn’t have been assaulted over it.

Terms like “diversity” and “tolerance” and “free speech are now hypocrisy as they really are only for those the loudest preachers want to have it, and even then, they are contemptuous of those they claim to advocate.

Black? Latino? Diversity and tolerance for you, and the loudest preachers regard them on a low level they try to hide.

White and from a southeastern state? Or Asian? No diversity or tolerance for you.

Pro same sex marriage? Anti Klan, who now have included anti homosexual rhetoric in their activities? Free speech for you.

Anti same sex marriage? Or, as in this instance, wanting to condemn filing false crime report? No speech for you.

The scary part is these big mouthed preachers somehow made it into a big name school like U C Berkley and, when many of us retire and die, are the future.

So far I haven’t heard nothing. But again it seems those that seen the pictures and know him aren’t talking.

That alone should tell you something.

Yeah, I’m sure they did report it. 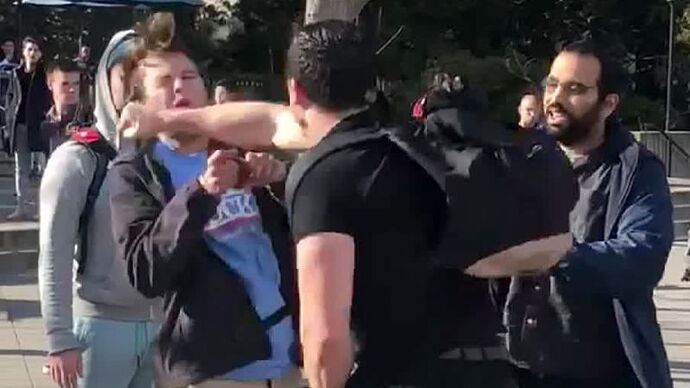 A conservative activist reported he was attacked while recruiting students for Turning Point USA at UC Berkeley, according to campus police.

No one should be physically attacked if they are peacefully protesting. Heck even if the are note being peaceful no one should attack them and let the police sort it out.

Just not sure why someone who is not a student would go to a campus to be an activist?

I am very political but I would not go to Purdue, Butler or IUPUI campuses here in Indy to protest.

Yes is still free but you curiously fail to mention that police are searching for him.

It’s likely they will find him at which point he will be arrested. He will not get away with this crime if it is in fact as it has been described. I would not be surprised to learn that it is not, but at this time it appears to be.

He should be arrested immediately and charged with battery, potentially aggravated battery depending on California’s applicable statute.

There is absolutely no place for this, ESPECIALLY on a college campus.

Sometimes the only way to hold a mirror up to people is to let them see others like them act out.

Sometimes the only way to hold a mirror up to people is to let them see others like them act out.

I’m sorry, but if the widdle weftists on the campus can’t take it they are just bad actors.

I’m sorry, but if the widdle weftists on the campus can’t take it they are just bad actors.

I already said that the guy should go to jail for assault.

The guy that got hit went there looking for trouble and he got it.

My reaction would be to ignore the guy for the idiot that he is… but there are just enough people who are incapable of that to insure conflict.

I hope one day people will get tired of this whole culture war nonsense and just let people be.

In reference to the question in the title about free speech on campus, a school official made this comment:

“The fact that the victim was not a campus affiliate has no bearing on this case. He had every right to be on campus, and every right to express his point of view,” said campus spokesman Dan Mogulof.

A conservative activist reported he was attacked while recruiting students for Turning Point USA at UC Berkeley, according to campus police.

So, to review, the school affirms the individual’s right to free speech, and is working with authorities to conduct an investigation into the assault. Just wanted to make sure this was on record in this thread.