Whatever happened to Amazon?

I enjoyed it. I’m an Amazon Prime member. In my world of “I need X book ASAP,” the system worked like a charm. Find a book at Amazon website, order book, doorbell rings within days with the book. Ya can’t ask for more than that.

Now? Now I see one story after another - from both liberal and conservative sources at that - that say of Amazon individually and collectively, something disturbing. What follows are the headlines, with links:

Peeing in trash cans, constant surveillance, and asthma attacks on the job: Amazon workers tell us their warehouse horror stories

Bezos’ net worth soars, while 10% of Amazon’s Ohio employees are on food stamps, according to the liberal-leaning think tank

Jeff Bezos Screws Over Workers At Amazon. Now He Wants To Do The Same At The Washington Post
Can Silicon Valley’s anti-labor attitude survive actual contact with a labor union?

Jeff Bezos Can Thank Exploited Workers for His $100 Billion

7 Examples of How Amazon Treats Their 90,000+ Warehouse Employees Like Cattle

JEFF BEZOS IS THE RICHEST MAN IN THE WORLD, BUT HUNDREDS OF AMAZON EMPLOYEES ARE ON FOOD STAMPS

Amazon Warehouse Employees’ Message to Jeff Bezos – We Are Not Robots
Amazon employees risk termination if they sit down on company time, two workers say

Why Are Amazon Warehouse Workers On Food Stamps?

So. There we are with not one, not two, not three but twelve stories - from both liberal and conservative sites - that report some version of the same thing. To wit: Amazon is mistreating its employees badly, so badly some are forced onto food stamps, others are peeing into trashcans, can’t even sit down for a moment and are working under “unbearable” and “grueling” conditions.

The free market soul that I am, the fact that Jeff Bezos could take his idea for Amazon and make it a seriously profitable, thoroughly useful reality is something to be admired.

But most decidedly, life, as they say, is short. If all these stories - and there are others out there of a similar note - are anywhere close to true, something is decidedly wrong at Amazon. There is no excuse - none - for such wretched treatment of hardworking employees and a work culture that is, from these reports, appalling.

The “buck”, as President Harry Truman used to say, “stops here.” By which Truman meant his own Oval Office desk. In this case? The buck stops with billionaire Bezos. And if there is anything all these stories have in common, it is the unhappy tale of a serious problem at Amazon - with Billionaire Bezos Busted.

Open secret that the working conditions are amazon are generally terrible. It’s the same on this side of the pond.

But fear not, they probably won’t even have those jobs in the not too distant future.

Funny how the right only care about the plight of workers if Trump is mad at the companies CEO. I remember being told workers should just find another job if they’re unhappy whenever Walmart is discussed and how tax payers subsidize their business practices.

And any of the fast food chains.

FIFTEEN percent of Americans in the general population are on food stamps.

Make your own conclusion.

Funny how I’ve been preaching about the plight of American workers for last decade.

Did you know Bezos was a big Obama supporter…and his administration did everything they can to protect him?

Those Amazon folks on food stamps must like their low wage jobs…I’ve been a Prime member for almost as many years as it’s been around, and I’ve had less than a handful of late or wrong deliveries.

Funny how I’ve been preaching about the plight of American workers for last decade.

What policies do you support to help out the plight of the American worker?

But fear not, they probably won’t even have those jobs in the not too distant future.

Alright, another opportunity to belt out the Styx classic…

“Thank you very much, Mr. Roboto, for doing the jobs nobody wants to”

We can discuss the wonderful working conditions and treatment of workers in China, North, Korea, and Venezuela if you prefer.

So answering your snark with facts is somehow “deflecting”?

If so, the language is dead.

Trump better not mess with my Prime.

To the OP, you are just discovering this now? Wow.

They have a really weird corporate culture too. 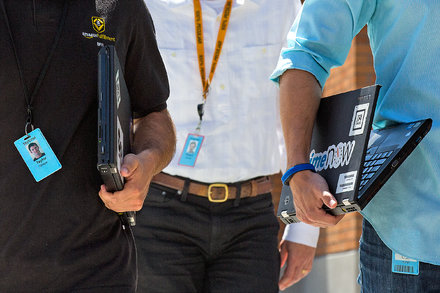 Inside Amazon: Wrestling Big Ideas in a Bruising Workplace

The company is conducting an experiment in how far it can push white-collar workers to get them to achieve its ever-expanding ambitions.

My son was recruited by Amazon 6 months after starting his first job out of college (at a Fortune 200 company where he was in their Exec training program.) They are big on poaching. But he had friends who took jobs at Amazon and warned him off.

I’ve rarely used Amazon since it’s inception. Not a Walmart shopper, either. I’d rather shop at locally owned business in my town even though it’s more expensive.

I get recruiting emails for Senior Software Engineer jobs at Amazon all the time. I basically have them on auto-trash. It’d take a ridiculous amount of money they wouldn’t be willing to pay to get me to work there.

My son wouldn’t go work for them in a million years, either.

He’s been at a tech start-up (but a very well established one that just did their last round of fund raising.) for the last 1 1/2 years and loves it. Treated like gold - excellent salary and great bennies (including stock.)

is bezos doing anything illegal?