Besides Tax Cuts For The Wealthy - What major domestic thing has trump accomplished?

Debt clock where is it? Has Fox News it? Why hasn’t it played the same prominent role as it did during the Obama presidency?

Has the one-time Australian now American Rupert Murdoch banned its use on Fox News?

Every indicator is the same. Steaming, booming, are palliatives for conservatives who thought the Obama economy was bad.

Obama didn’t have the luxury of a large debt fueled stimulus package the last two years either.

Obama didn’t have the luxury of a large debt fueled stimulus package the last two years either.

“Trickle down” and GDP growth aren’t synonymous. Deficit spending stimulates the economy, no doubt. Whether that’s achieved by reducing taxes or increasing spending (in Trump’s case and in many others both) is irrelevant. GDP tends to increase either way.

In terms of whether it amounts to “trickle down” isn’t as simple because it doesn’t identify who benefits from that growth. If the goal is to raise the living standard of lower socioeconomic people, then trickle down seems to me to be highly inefficient. It would be more direct and efficient to make sure the tax cuts target the people who need it the most rather than hoping the benefits “trickle down” from on high.

All deficit spending is stimulative. Its a question of “who” is being stimulated (eww). Corporations and the wealthy increasing spending doesnt mean it “trickles down” to the poor and middle class in a significant macroeconomic way. It just means they are spending or investing more. And all this with doubled deficits and increased rates.

isn’t as simple because it doesn’t identify who benefits from that growth.

What are your thoughts on Trump doubling the deficit to $1trillion and returning spending to 2009 levels? (At full employmemt)

What major accomplishments does Beto O’Rourke have?

What accomplishments does Alexandria Ocasio-Cortez have?

Are you asking what accomplishments they have as a result of running the country? None. What a silly question.

What major accomplishments does Beto O’Rourke have?

What accomplishments does Alexandria Ocasio-Cortez have?

Beto and cortez are the bar you hold trump to?

During the Obama era, wage increases never reached 3 percent in a 12-month period. One of the problems was too many people working part-time in the Obama years.

“The unemployment rate in September stood at 3.7 percent, the lowest rate since 1969. Not coincidentally, for the week ending Oct. 15, initial claims for unemployment benefits were the lowest since 1973, when the U.S. population was 110 million people smaller. This is because the Trump economy’s job creation numbers are regularly beating expectations – averaging over 208,000 jobs per month so far this year.”

Obviously an opinion piece. I wouldn’t call all of them successes. Rolling back environmental progress is not a success.

Why is the GDP under the Obama administration lower than Trump’s?

Because there was this thing called the financial crisis where we were losing 800,000 jobs a month when Obama was sworn in. You should read up on it.

You should read up on it.

You should provide sources.

hardly creating what Goolsby described as “some of the best economic conditions for a new president in a half century.”

Unemployment was around 4.8% when Trump was sworn in. One of the longest sustained job growths in history. In fact, Obama created more jobs in his last 2 years as President than Trumps first 2. Trump still has not beat Obama’s highest quarterly growths, and has increased gdp a little over 1.5% by doubling the deficit and returning spending to 2009 levels.

Yes, thats a good man on the radio talking point. But, as you can see, as we got out of the recession the vast majority of jobs were full time jobs 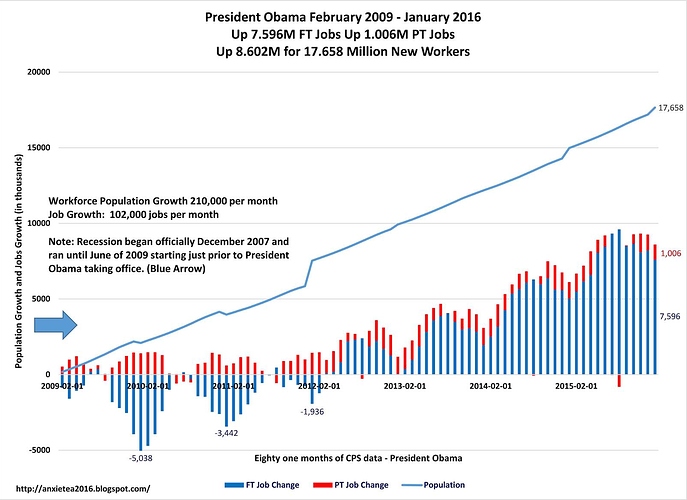 Remember that time you gave props to the Trump administration for recognizing kids with down syndrome and, in like a week, they cut millions of dollars of funding from the Special Olympics?

I guess that is an accomplishment. Technically.