You must have stopped following that story. Rosenstein claimed it was a joke after that was reported…

“Later Friday night, Rosenstein released a second statement pushing back on the story. “I never pursued or authorized recording the President and any suggestion that I have ever advocated for the removal of the President is absolutely false,” he said."

Take another look at your link. He said he only joked about wearing a wire and recording Trump. That wouldn’t preclude a discussion by the DOJ.

Wait, what? How is this sedition?

It is not. It is wishful thinking by some who support Trump, and have decided to believe some conspiracy theory perpetrated by the criminal enterprise known as the Trump Group, coupled with a victimization complex that has developed over years of dark propaganda brainwashing from their favorite radio and television personalities.

The question should be asked is whether they conspire to overthrow the president.

By using the proper constitutional procedure.

You forgot that part.

and any suggestion that I have ever advocated for the removal of the President is absolutely false,” he said.

Youmust have missed this too

…and any suggestion that I have ever advocated for the removal of the President is absolutely false,” he said.

If two or more [persons] in any or Territory, or in any place subject to the jurisdiction of the conspire to overthrow, put down, or to destroy by force the Government of the or to levy war against them, or to oppose by force the authority thereof, or by force to prevent, hinder, or delay the execution of any law of the or by force to seize, take, or possess any property of the contrary to the authority thereof, they shall each be fined under this title or imprisoned not more than twenty years, or both.

Yeah, none of that happened.

Conspire to destroy the government by discussing whether they could use part of the Constitution to defend the nation from potential peril? Levy war by asking questions among themselves about what is obviously and objectively a troubling situation where the President of the United States is CLEARLY beholden to foreign enemies hostile to the United States of America.

Get outta here. My sides hurt from laughing so hard.

The question should be asked is whether they conspire to overthrow the president.

No they did not. And not a soul is claiming they did. Here in objective reality none of what you errantly are suggesting is even remotely close to being truthful.

and any suggestion that I have ever advocated for the removal of the President is absolutely false,” he said.

Youmust have missed this too

…and any suggestion that I have ever advocated for the removal of the President is absolutely false,” he said.

You’re taking the story a little too literally, I think. For one, McCabe didn’t mention Rosenstein. I think McCabe is telling the truth.

Too bad…25th amendment trump your opinion

How do sit there after Obama’s team let Iran, ISIS, Venezuela and Putin rise and then call Trump incompetent? Obama lied about Obama care.

And giving Syria to Russia and Iran, while opening the door for ISIS to rise back up with a vengeance.

Ridiculous… Maduro is about to fall thanks to Trump, which hurts Putin and China (which I forgot to add to my list)… NK is not shooting rockets off ,and ISIS is down to about one hut and a cave. Seems many Dems are for never ending wars… I guess.

You and me both. The only real hope is to soundly beat the crap out of them at the ballot box. Get everyone and anyone possible to go vote against them and make it known they have spectacularly screwed up by their complicity with Trump.

I just cant grasp why these people live in such bubbles…why be like that? I have to think it’s like sex and having an orgasam…that high you get…

I just cant grasp why these people live in such bubbles…why be like that? I have to think ots like sex and having an orgasam…that high you get…

I think for many in America it is pure ignorance and the propensity to succumb to propaganda. Lack of intellectual curiosity and independent thought. There is a small percent that also do it because of the cruelty being the point. Some hatred of an “other” whatever that other may be in their eyes.

I think they will but only when the walls come tumbling down.

So…out of McCabes own mouth we now know that when we hear “the FBI suspected this” or “the FBI investigated that” we are talking chiefly about McCabe, the man who’s wife took tens of thousands of dollars from the Hillary campaign and should have recused himself from anything that dealt with Trump.
The disgraced and fired liar along with his sidekick Strzok. McCabe was the insurance policy Strzok talked about.

“I was speaking to the man who had just run for the presidency and won the election for the presidency and who might have done so with the aid of the government of Russia, our most formidable adversary on the world stage. And that was something that troubled me greatly,” McCabe said in one excerpt, referring to a phone call he had with Trump on May 10, 2017."
And what evidence did he base his decisions on? An opposition research dossier and the same sort of internet postings by partisans we see in this forum and elsewhere.

And not only was he behind the initial investigation of Trump, he also claims to be behind starting the Mueller investigation.:

." I said I thought it would help the investigation’s credibility. Later that day, I went to see Rosenstein again. This is the gist of what I said: I feel strongly that the investigation would be best served by having a special counsel. … Unless or until you make the decision to appoint a special counsel, the FBI will be subjected to withering criticism that could destroy the credibility of both the Justice Department and the FBI," he wrote." 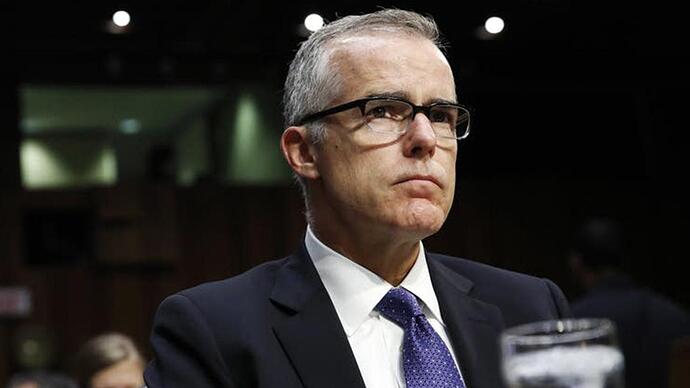 McCabe details central role in Russia probes, DOJ meetings on whether to oust...

Former FBI Deputy Director Andrew McCabe, speaking out in a new book and TV interview, detailed the central role he played in the bureau's Russia probe and the eventual appointment of a special counsel -- while reportedly describing Justice...

So, the next time you hear “Our President was suspect early on by the FBI” just replace “…the FBI” with “McCabe and Strzok”.