Virginia-class nuclear attack submarine hull SSN-803 will be the next USS Arizona.

Additionally, hull SSN-802 will be the next USS Oklahoma.

No ship by either name has existed since the destruction of those two vessels at Pearl Harbor.

I think it’s a bad omen if there is such a thing to name another vessel the USS Arizona.

I think it’s a bad omen if there is such a thing to name another vessel the USS Arizona.

On the other hand, it has been done before.

Shortly after the original Lexington was sunk in the Pacific, a carrier under construction was renamed Lexington.

The Lexington fought a tremendous fight before it was finally lost.

The AZ never got into the fight and went down almost with all hands in a horrifying defeat that pretty well ended “The Age of The Battleship” with a single aerial bomb.

I forgot to mention there is actually a third boat in the mix.

The only previous USS Utah was BB-31, a Florida-class battleship that was converted to a target ship between 1931 and 1932 and re-designated as AG-16. She was serving as a target and training ship at Pearl Harbor when she was sunk on December 7th. Attempts to raise her were unsuccessful and she remains as a memorial and war grave.

So she kind of fits in with the other two. 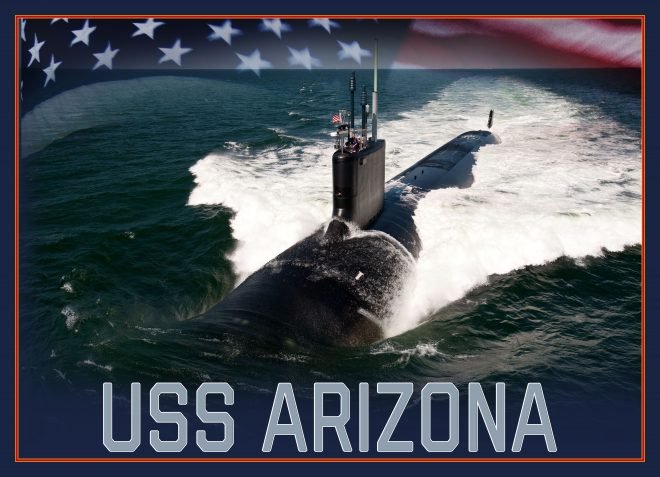 The following is the Dec. 30, 2019 Congressional Research Service report, Navy Ship Names: Background for Congress. From the report Names for Navy ships traditionally have been chosen and announced by the Secretary of the Navy, under the direction of... USS Kansas (BB-21) was a US Connecticut-class pre-dreadnought battleship, the fourth of six ships in the class. She was the second ship of the United States Navy named in honor of Kansas. The ship was launched in August 1905 and commissioned into the fleet in April 1907. Kansas was armed with a main battery of four 12-inch (305 mm) guns and was capable of a top speed of 18 kn (33 km/h; 21 mph). Shortly after she entered service, Kansas joined the Great White Fleet for its circumnavigation of ...

This is kind of interesting. There has not been a USS Kansas in the Navy far longer than Utah, Arizona or Oklahoma. There was a gunboat by that name during the Civil War, then BB-21 which was commissioned in 1907, decommissioned in 1921, struck in 1923 and broken up in 1924. Reckoning from 1921, there has been no USS Kansas for 99 years. And currently the name has not been assigned to any planned boat.

There is an LCS by the name of USS Kansas City ready to be commissioned, but it would be a greater honor to have a garbage scow named after you than an LCS.

Virginia-class submarine hulls SSN-804 through SSN-811 have been procured but are as yet unnamed and construction is still a few years away on any of them. I would have to imagine that one of them will receive the name Kansas. Particularly since the above linked Congressional Research Service report specifically spoke about the lengthy lack of a USS Kansas.

Theoretically, it could also be used as a name for a Columbia-class ballistic missile submarine. However, none of those boats have yet been procured and naming rules have not yet been announced for the class.