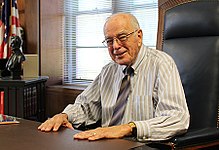 Manuel Lawrence Real (pronounced "real," not "reál"; born January 27, 1924) is a Senior United States District Judge of the United States District Court for the Central District of California. He was appointed in 1966 by President Lyndon B. Johnson. He was the last remaining federal judge in active service appointed by Johnson as well as the longest-serving currently active federal judge. Born in San Pedro, California to Spanish immigrant parents, Real received a Bachelor of Science degree from ...

Just learned about this moments ago. United States District Judge Manuel Real is taking senior status on November 4, 2018. He received his commission from LBJ on November 3, 1966, so he has logged fully 52 years on the Central District of California (effective the day before his senior date). As a senior judge, he can continue to hear either a full or reduced level of cases, although I would assume he will be reducing his caseload.

If you look at his Wikipedia article posted above, Real has had some, shall we say, “issues” over the years, including abusive behavior and behavior that could conceivably rise to the level of “high crimes and misdemeanors”. Republicans actually opened impeachment investigations, but eventually declined to move forward.

Impeachment is hard and without a “smoking gun” is implausible. Successful impeachments, such as against Judge Kent, have consumed much of the House of Representatives time and much of the Senate’s time holding the impeachment trial.

All recent successful impeachments started with a recommendation by the United States Judicial Conference that the judge be impeached, such as with Kent. In Real’s case, no such recommendation was made and Congress did not want to make the effort, with little likelihood of success.

So if they wouldn’t try to impeach Real, who most likely committed a high crime and misdemeanor, they aren’t going to try the politically motivated impeachments some posters have suggested.

He’s a Liberal Politician from California! California is pretty messed up and sick place, and I’m sure that there are plenty of Liberal politicians that are evil and corrupt from Cali.

man, when i spoke of how the republican party turned to the church to use the lessons we learned growing up (evil must be defeated at all costs) and spread that message to the masses in the Republican party i was spot on yet again.

behavior that could conceivably rise to the level of “high crimes and misdemeanors”.

The conflict of interest?