We all know what a god fearing man Trump is, I mean afterall it was gods will that Trump is president.

So him signing Bibles was naturally the next step in the holy process. 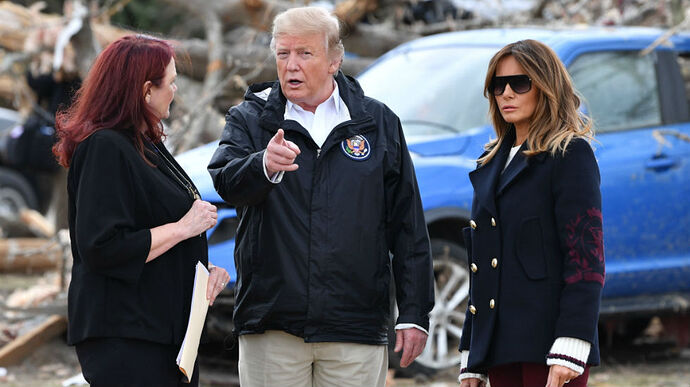 President Trump on Friday signed Bibles for people affected by a string of deadly storms that ripped through Alabama.

I don’t get why anyone would want someone to autograph their bible.

Who doesn’t want their bible signed by a treasonist and low life criminal!

Who doesn’t want their bible signed by a treasonist and low life criminal!

Think of the value on Antiques Roadshow circa 2150.

Is this really a big deal? I hope not. We might as well be arguing Obama’s lapel pin, or lack thereof.

Is this really a big deal? I hope not. We might as well be arguing Obama’s lapel pin, or lack thereof.

It isn’t a big deal.

I just find it funny.

Yeah…he should have told them no.

Can you imagine the poutrage on the right if Obama did this?

You did hit the real value though. A bible signed by a President could be a real windfall in the future. Heck, some Trump supporter would probably be willing to pay big bucks today.

Where they out of paper towels?

Yeah…he should have told them no.

I saw somewhere that the only group where a majority think Trump is trustworthy are evangelical christians.

If you think signing Bibles was bad, how about him signing a woman’s chest?

He is basically Happy Gilmore.

C’mon, everybody does book tours.

So the serial adulterer is now signing bibles?

This is really no big deal. He didn’t bring the bibles to sign and handout. Presidents are asked to sign a lot of items. If someone wanted him to sign there bible, so what. I wouldn’t, but I don’t care if someone else does.