Trump pledges to help Canada in their disput with China

Prime Minster was in Washington today to meet with President Trump, outside of trade the major subject of meeting was the on going dispute with China, in a sign of good faith Trump has offered to help Canada in anyways he can.

for those who don’t know Canada has been a target of Chinese aggression since we sided with America and arrested a high ranking Chinese businesswoman for the DOJ. a number of Canadian have been arrested for phony crimes, a Canada had his ten year prison sentence for drug smuggling converted into a death sentence. a number of Canadian export have been blacklisted hurting farmers.

Asked today how he managed to rebuild the relationship with Trump that had frayed so badly during the re-negotiation of the North American Free Trade Agreement, Trudeau said it came down to remembering what is important.

“Throughout the NAFTA negotiations, which were contentious at times, absolutely, we remained focused on the things that really matter,” he said. “And because of that, we’ve come through it with a very strong and positive relationship with the United States, and indeed are moving forward on the ratification of an accord that will secure this important relationship for years to come.” 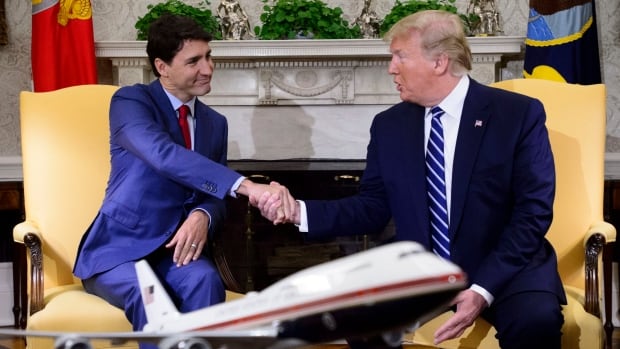 Trump pledges to do 'anything' he can to help Canada in its dispute with China...

A year after Canada and the United States seemed poised to descend into an all out trade war Prime Minister Justin Trudeau boasted that he had completed a successful trip to the U.S. in which both countries agreed to work together in a number of key...

Hopefully Trump will and hopefully lib Canadians will put their “feelings” back away and allow their brains to dominate their actions going forward?