I saw the superhero horror film Brightburn Saturday and enjoyed it.

It’s an interesting dark take of the superhero genre, and I hope there will be more films in that universe.

I liked the performances in the film, especially Elizabeth Banks.

It’s a good film to watch and recommend everyone to see it.

I would give this movie an A. Finally a horror film that has some actual gore in it.

Though its not a superhero movie but more about the rise of a supervillian. At its heart it is the story of Superman if he was evil.

There are a couple of plot holes but I really liked how the directors did their best to not have the audience feel any sympathy or connection with the young boy. Once he realizes he has superpowers and is superior to the rest of humankind a huge disdain takes over him, even for his own parents. After watching the movie the scene in the classroom made sense and explained a lot of the movie for me.

If this movie makes enough money there could be an interesting sequel especially taking into the account the scene with Michael Rooker right at the end of the movie. But I dont want a sequel where he finds his humanity, I want Brandon as he matures into adulthood becomes more evil and more dismissive of humankind. It would be great to see a storyline that embraces this and shows how we would stand no chance against anyone who truly had super powers and was evil.

I hope you direct a movie one day. This is exactly how a villain movie ought to be. 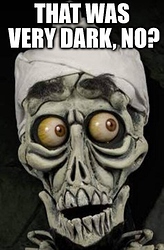 For those who like comics, Mark Waid wrote a series ten years or so ago called Irredeemable which was basically a Superman goes bad tale. About a Superman like character who wants to be good but is mocked by classmates and feared by his parents all through his childhood. It continues into adulthood until one day he snaps and becomes the monster everyone is afraid he’d become. The rest of the Justice League analogues (minus Batman as that character is killed in the first issue) then have to try and bring him down.