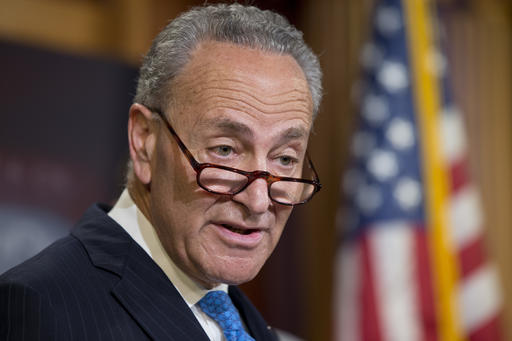 Eager to slam Trump, Schumer contradicts himself in support of Chief Justice...

“I don’t agree very often with Chief Justice Roberts, especially his partisan decisions which seem highly political on Citizens United, Janus, and Shelby,” the Democrat wrote in a Twitter message. “But I am thankful today that he — almost alone among Republicans — stood up to President Trump and for an independent judiciary.”

He agrees with the President on the partisanship of the SCOTUS while applauding them for standing up to accusations of partisanship.

I’m sure we’ll all enjoy a good thread’s worth of mocking and taunting at this like we do when the President tweeted the original criticism.

Did you read the WHOLE article?

No, just the part that confirmed my bias and gave me what I need to taunt libs.

So when is the Schumer Tweet Shaming going to begin?

Did you read the WHOLE article?

Did you see something that makes Chucky not an idiot, or just that it’s Chucky?

Are we going to do this or what?

Now that is some high quality Chucky-splainin’ right there.

Good Lord, are you libs serious? Not one post?

What changed since the PAST?

Only Obama was allowed to shame justices during the State of Union speech.

What changed since the PAST?

The fact that that was the past and its now the present.

The fact that that was the past and its now the present.

Should have thought that one through better.

It seems like Conservatives (and Fox News) don’t have any concept of time.

I don’t have a problem with that.

Its much like having a willful child who, after a string of bad behavior, suddenly does something right. Do you continue to punish the child for his good act as well as the bad?

But later in the article:

The criticism was prompted after U.S. District Judge Jon S. Tigar, who was nominated by President Obama in 2012 to the U.S. District Court for the Northern District of California, issued a temporary restraining order late Monday against Trump’s plan to refuse asylum to immigrants who cross the U.S.-Mexico border illegally if they do not arrive at a port of entry.

“You go to Ninth Circuit and it’s a disgrace…Because you cannot win, if you’re us…” Trump said…

In response, Roberts issued a rare criticism of the president. “We do not have Obama judges or Trump judges, Bush judges or Clinton judges,” he said in a Wednesday statement provided to Fox News. “What we have is an extraordinary group of dedicated judges doing their level best to do equal right to those appearing before them…That independent judiciary is something we should all be thankful for.”

But the statement from the chief justice only prompted Trump to double-down on his criticism of the judiciary, saying the courts aren’t as independent as Roberts makes them out to be.

“Sorry Chief Justice John Roberts, but you do indeed have ‘Obama judges,’ and they have a much different point of view than the people who are charged with the safety of our country,” Trump tweeted. “It would be great if the 9th Circuit was indeed an ‘independent judiciary,’ but if it is why are so many opposing view (on Border and Safety) cases filed there, and why are a vast number of those cases overturned,” Trump continued. “Please study the numbers, they are shocking. We need protection and security - these rulings are making our country unsafe! Very dangerous and unwise!”

So conservatives are bad children, and democrats are the only good ones?

They don’t want any part of it. Wonder why?

I took it as you were implying that Chuck was the child.

Ha. Fair enough. When a guy from one group has to be compared to the worst of another group… well neither are that great.

Ha. Fair enough. When a guy from one group has to be compared to the worst of another group… well neither are that great.

That’s true. Who would you say is the best guy from each group?

“Partisan” is defined (by me) as a position that is different than that held by the person using the word.