Sounds like she needs a lot of help just getting around.

It was fast with my grandma she made it 10 months which was more time than the doctor gave her. From what I remember it was the worst in terms of killing the fastest. They didn’t even try surgery just straight to chemo.

Sorry to hear that Axx. Pancreatic cancer is horrible. I hope she didn’t suffer.

That’s right they did.

Get over it, it’s politics.

Big props to our president. 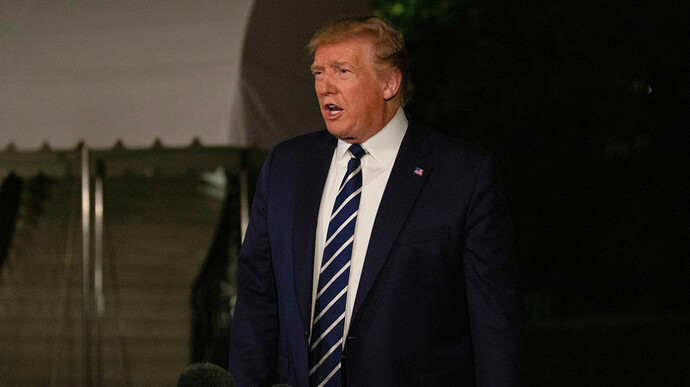 President Trump on Friday offered well wishes for Supreme Court Justice Ruth Bader Ginsburg, saying he hopes she makes a full recovery after it was announced she

Thanks, it was awhile back she held up well at least she didn’t show it to us. It’s sad but when I hear the word pancreatic cancer that’s the place it takes me. I pray Ginsberg holds on.

It was fast with my grandma she made it 10 months which was more time than the doctor gave her. From what I remember it was the worst in terms of killing the fastest. They didn’t even try surgery just straight to chemo.

they tried surg for mine. they just closed her back up and got the morphine started

Statement released by the SCOTUS:

“Justice Ruth Bader Ginsburg today completed a three-week course of stereotactic ablative radiation therapy at Memorial Sloan Kettering Cancer Center in New York City,” a statement from the Supreme Court read. "The focused radiation treatment began on August 5 and was administered on an outpatient basis to treat a tumor on her pancreas. The abnormality was first detected after a routine blood test in early July, and a biopsy performed on July 31 at Sloan Kettering confirmed a localized malignant tumor.

"As part of her treatment, a bile duct stent was placed. The Justice tolerated treatment well. She cancelled her annual summer visit to Santa Fe, but has otherwise maintained an active schedule. The tumor was treated definitively and there is no evidence of disease elsewhere in the body. Justice Ginsburg will continue to have periodic blood tests and scans. No further treatment is needed at this time. " (NPR)

Glad she seems to have recovered so swiftly. This is not the way anyone should spend their last days on Earth.

Can anyone say Coney Barrett?

It will only take about three months to replace and have her fast track to confirmation by Nov 2020.

Jim Bunning the last senator to bury her is dead.

I don’t think she is dying anytime soon.

It appears the rumors of her demise are greatly exaggerated. Good for her. I’d hate to think we’d have to go through another Supreme Court appointment mockery so soon.

To hell with her position as a judge. She shouldn’t be living her last years like this.

It does not appear that anyone is going to have to get used to saying the Coney fellows name quite so soon.

It sounds like your statement says her treatment was very successful. Maybe it was caught very early.

This is what, her third time with cancer in the last 10 years?

“Recovery” may just be subjective on my part. I can’t help but think Chemo/Radiation is just causing future tumors for her at this point. I hate the idea of anyone suffering like that. No answers here, just a random outpouring of empathy.

I get it…but that old cats got 9 lives. I’d hate to think she’s hanging on to see if Trump gets defeated. But you know she would do just that…tough old bird that she is.

A foolish choice in my opinion, but she’s free to destroy what health she has left just to spite the President.

I imagine in her mind she has to. Don’t you. Not necessarily for spite.

I don’t imagine what other minds are imagining.

Such saints; “health crisis”, “needs to retire”, and focused on anything negative about her evening out. Thoughts and prayers, I’m sure.

I don’t see anyone wishing her bad health. On the other hand:

David Koch Dead at 79 Outside The Beltway