Are mail in votes good or bad this time?

Trump should be focused on the economy.

No it wasn’t. Did you miss the hundreds of sworn affidavids?

They didn’t accept the Trump presidency for the full 4 years plus playing nice with libs earns one nothing. Zero.

Take it to the SC and let them decide.

Like the hundreds of affidavits that were gathered for the Michigan suit?

How many times do you have to be conned by Trump and his signature move of “look at this binder full of paper” before you stop being conned?

Hundreds of affidavits are not enough.

I am happy with what President Trump did during his term and don’t want him to go out on a low tide.

It just was not close enough…as close as it was.

When I saw he had FL and OH I was sure he had the vote won…Then the mail in ballots were piled on and it slipped away.

If that’s the way you see it then suit yourself.

The election was clearly stolen in a number of different ways and i don’t see conceding prematurely. If you don’t see more than affidavids as evidence you must be watching the networks.

Take it to the SC , present the evidence and gave a verdict. At least if they fight it that hard maybe the next election (senator runoffs in GA) will be cleaner because they will be under more scrutiny than if we just slough it off and say “oh well”.

If Biden gets the office i will never recognize him as legitimate myself.

Many of us said the only way Biden could “win” was by cheating.

again false, the opinion quite clearly states that the major flaw, and the one that kills it no matter the rest is that the relief sought is not in line with the complaint. in the complaint, before any evidence of systemic fraud is heard there are 2 voters who claim to have been disenfranchised by fraud, the relief for that under strict scrutiny would be to change those 2 votes, not to nullify 60,000 others that “may” be fraudulent. relief can be sought under the claim, just not the relief being sought.

wanna bet? i fully expect trump or his followers try something even stupider…

Great let them keep fighting it so when the Senate runoffs come up Republicans don’t vote because they think the election is rigged anyway and Trump already officially lost.

Trump’s supporters are already accusing the Governor of Georgia of being a covert agent of Venezuela, and stealing millions of votes away from Trump. They should probably sit the Senate elections out to teach the GOP a lesson…

Many of us said the only way Biden could “win” was by cheating.

"Among the plaintiffs are Trump ally Rep. Mike Kelly (R-Pa.), who has asked the court to strike down an expanded mail ballot policy that Pennsylvania put in place last year after it was passed by the state’s GOP-held legislature. " A group of Pennsylvania Republicans have filed an emergency lawsuit seeking to block certification of the election results in the Keystone State, which President-elect Joe Biden won by more than 80,000 votes.

If Biden gets the office i will never recognize him as legitimate myself.

This is exactly the point of this whole stupid exercise by President Trump.

Are you sure they aren’t part of the super duper double secret squirrel deep state too? I mean they did pass it in the first place, right? Right?

Pennsylvania Supreme Court rejects Trump lawsuit, emphasizing that any problems alleged "do not warrant the wholesale disenfranchisement of thousands of Pennsylvania voters”

Another one bites the dust.

How was it “clearly stolen”?

You have stated this several times and never clarified.

"Among the plaintiffs are Trump ally Rep. Mike Kelly (R-Pa.), who has asked the court to strike down an expanded mail ballot policy that Pennsylvania put in place last year after it was passed by the state’s GOP-held legislature. "
Pennsylvania Republicans sue in last-ditch effort to stop election certification | TheHill

Sean Parnell is getting called out fiercely on this because he has a tweet from April praising the “bipartisan mail-in vote law”.

And yes- the GOP primarily passed this- all but two GOP legislators passed it.

This is what Trump does- the both sad and utterly hysterical situation of the GOP suing itself for passing what they claim is an unconstitutional law…it could only happen under Trump. 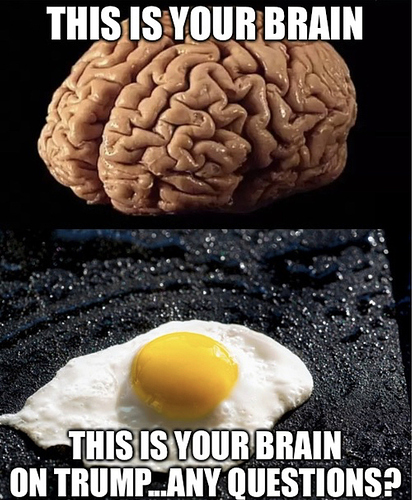 Yeah but they’re their own deep state now. Or were? Sorry. I just can’t keep up anymore.

"Among the plaintiffs are Trump ally Rep. Mike Kelly (R-Pa.), who has asked the court to strike down an expanded mail ballot policy that Pennsylvania put in place last year after it was passed by the state’s GOP-held legislature. "
Pennsylvania Republicans sue in last-ditch effort to stop election certification | TheHill

Wait? They’re responsible for the policy they’re complaining about?

Yeah, but you see it was good policy then. Or something.

How was it “clearly stolen”?

You have stated this several times and never clarified.

Democrats were allowed to vote

Trump said it himself. Only votes for Trump were “good” votes. All the votes for Biden were illegal.

While we all wait for legal proceedings to play out across the country, please take a look at vote #'s for Georgia below. Also note that Michigan currently has both a contested Presidential and Senate race too. Finally add Wisconsin and Pennsylvania that combined with Georgia and Michigan make up a select group of the ONLY FOUR STATES in the United States individually each where Biden got more votes than both Clinton & Obama did in 2016 and 2012, respectively. Here is just Georgia : Current …