Most times when someone thinks a news source is neutral it’s because the source validates the persons bias or opinion. Being skeptical is good.

A neutral news source gives a voice to the various sides of an issue. If they don’t invite those voices on, they are unbalanced and unfair news organs. If they invite them on but they refuse to appear, and they have some anchors willing to push a different line, they are balanced and fair. Individually, presenters and editors are biased.

Anchors leaving because they are unhappy with being challenged on their positions by other hosts is not a negative reflection on fairness of the station management.

Oh, oh…Project Veritas has been recording calls to CNN and it appears that Zucker is resigning as a result of what’s being exposed? Oh, oh…Project Veritas has been recording calls to CNN and it appears that Zucker is resigning as a result of what’s being exposed?

when did that call happen?

Here’s the latest on vaccines and the influence of big pharma on our government. Let’s all wake up! IMO…when the government comes after the children, there will be retaliation. In what form, IDK. Maybe like the Canadian trucker’s protest or maybe a mostly “peaceful protest” like in Minnesota or a “summer of love” like in Seattle but this will not happen without severe pushback.

Project Veritas wins in court once again against forces that would attempt to stifle the truth about their actions being exposed. This time, the loss is in Oregon. As under Mayorkas’s DHS sets up their new department for controlling “misinformation” and hiring an individual who has been a prominent source of misinformation, the American people should be alarmed. Mayorkas is a liar. Who was hired to head this new department, Nina Jankowicz…is an already proven liar and yet, they are in charge of “misinformation”? It doesn’t take a rocket scientist to understand that what’s actually happening is the government is attempting to control the freedom of the press and an attack on our 1st Amendment rights. This goes against EVERYTHING our Founding Fathers worked against.

A month back, an independent journalist was raided in his own home and the government took items for the sole purpose of attempting to control the narrative. This is beyond dangerous and is an attack on the foundation of our country and the freedoms “we” represent throughout the world. All of us should be united in condemning this. Here’s a video from James O’Keefe who was that independent journalist and whether or not you agree with his articles is not important but the attack against him should be? Today…it’s Project Veritas but tomorrow…it’ll be some other news source…all depending on which party is in the WH. Is this what “we” want? This must be stopped and legislated against. Here’s what he has to say; 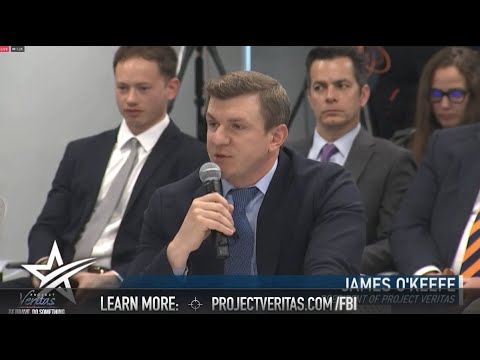 The CCP is controlloling the Democrats. Everything the Fems foes helps the CCP incremrntally get into a stronger position against the US.

They misdirect by keeping up a barrage of sound bites accusing the MAGA Repubs of colluding with Russia to spread Russian influence globally, when it’s the Dems colluding with China to increase Chinese influence and control globally.

Now James O’Keefe has exposed those in Twitter that have been censoring one side, that has been denied by the left since the inception. Listen with your own ears; Here’s the latest on Project Veritas and our corrupted FBI. They invaded James O’Keefe’s home and confiscated what ever they deemed they had a right to, in spite of our laws. Now it’s going to court and this case that attacks the freedom of the press is coming to a head.