Originally published at: NOT A GOOD SIGN: Senator Cory Booker Begs Facebook Users for $1 to ‘Help’ His Campaign | Sean Hannity

New Jersey Senator Cory Booker’s campaign continued to lose momentum in the previous weeks; with the left-wing legislator begging Facebook users for $1 to help finance a “full team in this campaign.”

“Hello everybody, it’s Cory Booker speaking to you from our campaign headquarters in Newark, New Jersey. I’m asking for your help. We need folks to chip in $1. Can you pitch in $1 today to help us make sure we continue to have the resources we need to field a full team in this campaign?” asked Booker.

“With your help, we are going to continue to make strides in winning the nomination,” he added.

Challenge accepted! My staff is having a donor goal competition and I want in. Would you consider chipping in $1 to our campaign? https://coryb.kr/2VEMq66

Beto O’Rourke’s campaign hit a similar snag on the campaign trail this week; where he spoke to less than 20 people in Oklahoma.

“Great being in Tulsa tonight for an important conversation about fighting dangerous efforts to roll back reproductive health care, working to ensure we achieve equal pay, and mobilizing to finally ratify the Equal Rights Amendment,” posted O’Rourke on social media.

Great being in Tulsa tonight for an important conversation about fighting dangerous efforts to roll back reproductive health care, working to ensure we achieve equal pay, and mobilizing to finally ratify the Equal Rights Amendment. pic.twitter.com/aSbj1bOJ75

“Absolutely,” O’Rourke told supporters in eastern Iowa. “This campaign is about going to where people are, and you see that physically in where I show up. But it also has to be in those channels or those social media streams where people get their news and their information. That also includes Fox.”

“Very open to doing that,” he added, though stating his campaign was not currently in talks with the news network.

After the ratings were released on @PeteButtigieg's town hall on Fox News, it's the hottest ticket on the 2020 express.

Now @BetoORourke is posturing to get his time in the biggest cable spotlight right now.https://t.co/ovtXb7I6zu

Anti-Trump crusader Elizabeth Warren refused an invitation to speak before a Fox News town Hall last week; saying she’s “turning them down” despite hovering at just 8% in recent polls.

“I love town halls. I’ve done more than 70 since January, and I’m glad to have a television audience be a part of them. Fox News has invited me to do a town hall, but I’m turning them down—here’s why,” posted Warren on social media.

“Fox News is a hate-for-profit racket that gives a megaphone to racists and conspiracists—it’s designed to turn us against each other, risking life and death consequences, to provide cover for the corruption that’s rotting our government and hollowing out our middle class,” she adds. “Hate-for-profit works only if there’s profit, so Fox News balances a mix of bigotry, racism, and outright lies with enough legit journalism to make the claim to advertisers that it’s a reputable news outlet. It’s all about dragging in ad money—big ad money.”

Nancy will give you a dollar Corey. 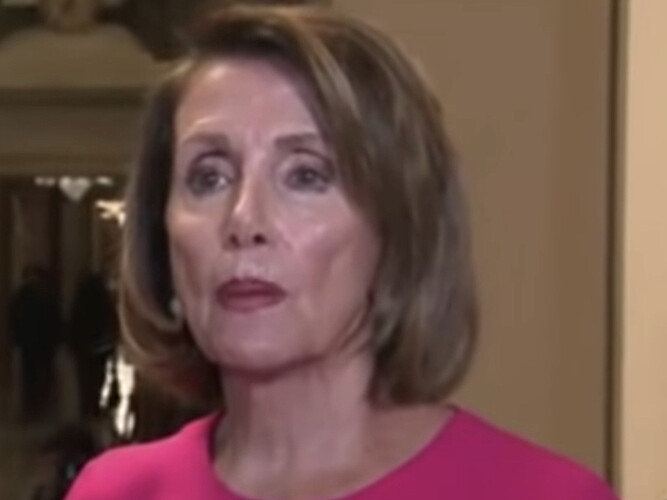 Pelosi: I'd Give "One Dollar" For The Wall

Speaker Nancy Pelosi is asked whether Democrats would be willing to put "even a dollar" toward funding a border wall. Pelosi laughingly said she would give "one dollar." "Is there a situation in which you would accept even a dollar of wall-funding...