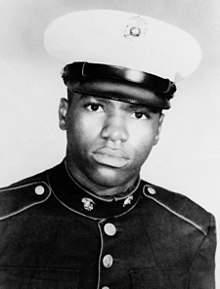 Via Wiki:
When he was 14 years old, he altered the date on his birth certificate to show he was born December 21, 1949. He processed through the recruiting station, and enlisted in the U.S. Marine Corps on September 18, 1968. . . . At first he struggled to make it through, but was able to with help from one of his fellow recruits. . . . .

Bullock arrived in South Vietnam on May 18, 1969 and was assigned as a rifleman in . . . 2nd Battalion 5th Marines, 1st Marine Division and stationed at An Hoa Combat Base west of Hội An in Quảng Nam Province.

On June 7, 1969, tree weeks after PFC Bullock arrived in Vietnam, the base came under night attack by the NVA. Bullock was killed by small arms fire while making an ammunition run to resupply his beleaguered unit.

On June 7, 2003 a section of Lee Avenue in Brooklyn, where Bullock had lived since age 11, was renamed in his honor.

Dan Bullock (December 21, 1953 – June 7, 1969) was a United States Marine and the youngest American serviceman killed in action during the Vietnam War, dying at the age of 15. Bullock was born in Goldsboro, North Carolina. He lived in North Carolina until he was about 12, when his mother died and he and his younger sister, Gloria, moved to Brooklyn to live with their father and his wife. He had wanted to become a pilot, a police officer, or a U.S. Marine. When he was 14 years old, he altered th...