.
It’s time for the last Superspeedway race of the year, as the IndyCars return to one of the most difficult tracks of their season to do the ABC Supply 500 at Pocono Raceway in Long Pond, Pennsylvania. 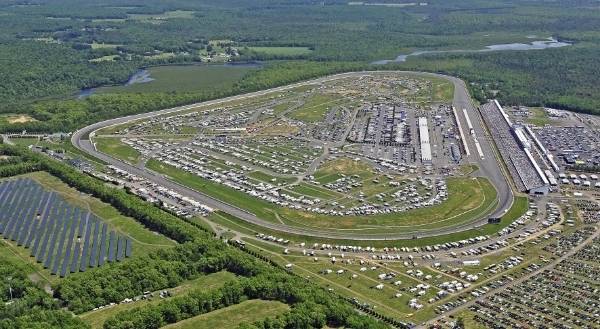 .
.
.
It’s called “the Tricky Triangle” because the 2.5-mile track is a triangle in configuration but none of the corners is like any other, making it VERY difficult to set up for. Turn 1 is 14 degrees in banking modeled after the old Trenton Speedway in New Jersey. Turn 2 is 9 degrees in banking and is much like the Indianapolis Motor Speedway. Turn 3 is only 6 degrees in banking and is similar to the Milwaukee Mile. You can set a car up for maximum speed for one turn but be hopeless in the other two. Engineers lose sleep, hair and sanity trying to get Pocono right. Drivers just go as fast as their courage will take them.

.
Race fans who attend will see exhibitions of classic cars and a quarter-midget event but for IndyCar fans there is only one event, and it is THE EVENT - the 500-miler IndyCar race on Sunday. The fly in the ointment is RAIN, and it looks like rain will be there on Saturday, for most of the day, with the worst of it when the IndyCars were supposed to be qualifying and practicing. Qualifying may be put off and the field gridded by points, instead. We will see. Sunday doesn’t look much better, but the rain may abate by race time. Again, we will see.

If the race comes off on schedule it is going to be something to see. Pocono has produced GREAT racing in the past few years, with starts and restarts that are often 7, 8, or even 10 cars wide at times. Remarkable! 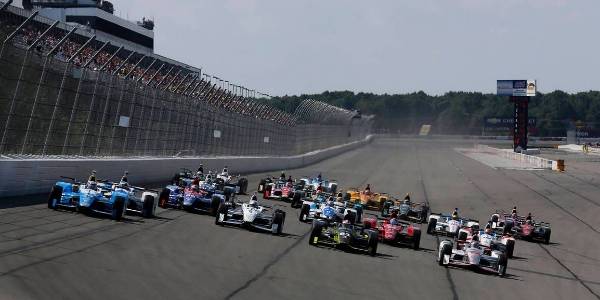 .
.
.
Saturday is supposed to have 1 practice in the morning, qualifying in the early afternoon and a final practice following qualifying. Qualifying is supposed to be broadcast on NBC-SN at 1:30pm EASTERN time. Tune in and see what did and did NOT happen, due to weather, and what will happen, going forward.

.
Saturday at Long Pond - The IndyCars hold their 1st practice…

.
It was delayed for a half hour, due to weather, but when it was over a rookie topped the time charts, but it wasn’t the rookie everyone might guess. Indy Lights veteran Zach Veach driving in his rookie season for Andretti Autosport was the fastest guy at the end of the session.

.
Here was the order of speed for the P-1 session, with times for the TOP FIVE: [R] denotes rookie: 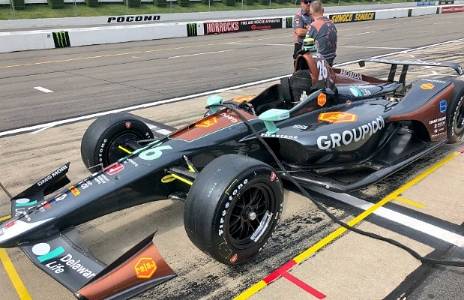 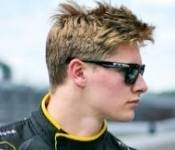 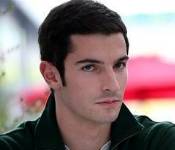 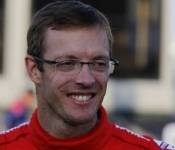 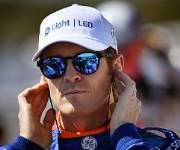 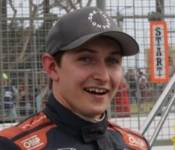 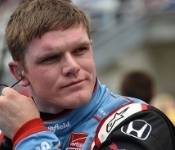 .
.
.
Next up is qualifying…if the rain holds off…

.
Saturday at Long Pond - The IndyCars are qualified!..

.
And tying AJ Foyt on the all-time qualifying list was Will Power for Team Penske, grabbing the 53rd pole position of his career.

Qualifying at Pocono is dirt simple: Each car goes out one at a time and puts in a warm up lap, followed by two hot laps. Those two lap speeds are averaged and the fastest driver is on pole, with everyone lining up in their order of speed.

.
Here is the way the IndyCars will grid for the ABC Supply 500, with times for the TOP SIX: [R] denotes rookie; the time is for two laps; the speed is the average of those two laps 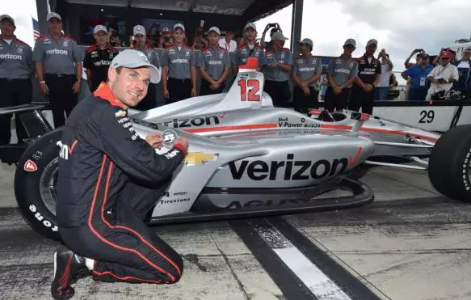 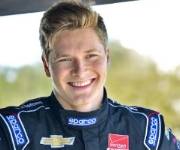 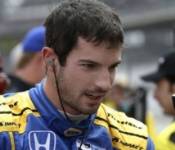 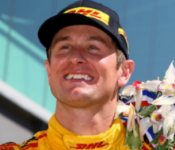 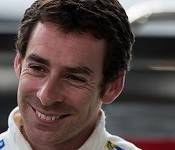 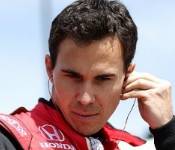 .
.
.
Following qualifying, there was supposed to be a late-day final practice, but the rains returned heavily and all activities were cancelled. There will be no Sunday Warm-up, so the cars are going to have to race with the best guess they have, based on the P-1 session results.

.
Not too many changes and a driver change among them.

.
.
.
Ed Jones was in the DC Solar car at Mid-Ohio but returns to his regular NTT Data car of two-tone blue for Pocono, looking just like it did at Texas:

.
.
.
Graham Rahal was in the 5/3 Bank car of blue and white for Mid-Ohio but is in a mostly white with dark blue accents car with “BobbyRahal.com” on the flanks:

.
.
.
Ed Carpenter drives the ovals for his team so he is the guy in the black and white Fuzzy’s Vodka # 20 this weekend, instead of Jordan King:

.
.
.
Simon Pagenaud was in the screaming yellow Menard’s car at Mid-Ohio but jumps into a new car for him, the Shell and Chevrolet car of almost all white:

.
.
.
Zach Veach has spent the middle part of the season in the orange Relay car but returns to his early season mount, the beautiful copper and black Group One Thousand One car for Pocono:

.
.
.
Marco Andretti was in the Ruoff Home Mortgages car of blue and white at Mid-Ohio but comes back to the red and white US Concrete car for Pocono:

.
Despite the threat of rain, which never came, the IndyCar race was held on Sunday to completion, and it will be remembered for two things: First, the dominating drive by Alexander Rossi for Andretti Autosport, leading 180 of 200 laps and taking the WIN with a lead of 4.5 seconds over P2 Will Power for Team Penske, with Scott Dixon for Chip Ganassi some 41 seconds back for P3.

Second, it will be remembered for the vicious crash that took out 5 cars on a restart on lap 7, following a tap and spin on lap 1 that took out Spencer Pigot for Ed Carpenter Racing.

Rossi for the 3rd WIN of the season and the 2nd in domination. 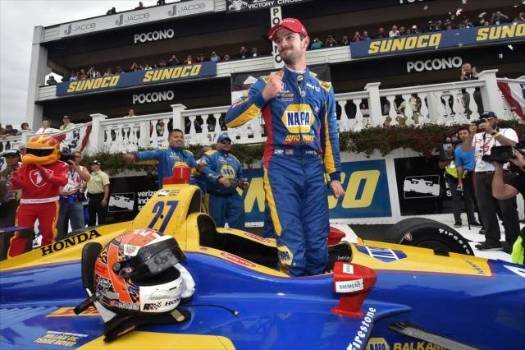 .
.
.
The huge shunt occurred on the lap 7 restart following the Pigot incident, as Robert Wickens for Schmidt Peterson got his nose inside of Ryan Hunter-Reay for Andretti Autosport at full song in Turn 2, where there is only ever room for 1 car. The two barely grazed each other - Wickens’ front right wheel to Hunter-Reay’s left rear - but it was enough to send them both to the wall. Wickens’ car then launched over Ryan and into the catch fencing, which hooked it, sending it back onto the track in a violent spin, shedding debris at a spectacular rate.

As the debris and fluids from both cars scattered all over the track James Hinchcliffe for Schmidt Peterson smacked into Takuma Sato for Rahal Letterman Lanigan. Then Pietro Fittipaldi for Dale Coyne Racing spun into the sideways-sitting Hinchcliffe. The rest of the field miraculously avoided spinning cars and huge piece of debris flying all over.

Four of the five involved walked away, but it took the safety workers some 10 to 12 minutes to free Wickens from his machine. He was taken to the infield care center but then flown by lifeflight to a local area hospital. At this time it is known that he was awake and alert, but sustained several injuries to extremities, his spine and his lungs. None are said to be life-threatening. 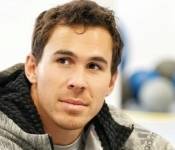 .
.
.
The race was red-flagged for almost 2 hours to repair the catch fencing. Once it was resumed Rossi jumped into the lead over Power and was only ever out of it while pitting and for a few late laps, following a pit stop. The real racing was behind him and Will and that was a lot of superb jockeying that saw a number of drivers occupy spots P3 to P10 at one time or another. Major battlers included Marco Andretti and Zach Veach for Andretti Autosport, Sebastien Bourdais for Dale Coyne, and Josef Newgarden and Simon Pagenaud for Team Penske. All took turns in the TOP FIVE at one time or another.

Once it was restarted on lap 11 the race was incident-free to the end.

.
.
.
With this result here are the TOP FIVE in points leaving Pocono:

.
.
.
Next up for the IndyCars is the Bommarito Automotive Group 500 at Gateway Motorsports Park in Madison, Illinois - just across the Mississippi River from the St. Louis Gateway Arch - next weekend, August 24-25. Joining the IndyCars will be Pro Mazda and the Indy Lights.

NOTE: We will update readers on the condition of Robert Wickens in the Off-Season thread as word comes out.