According to the Daily Caller, Fonda’s manager issued the actor’s statement hours after calling for the President’s youngest son to be “held in a cage with pedophiles” due to his father’s immigration policy.

“I tweeted something highly inappropriate and vulgar about the president and his family in response to the devastating images I was seeing on television. Like many Americans, I am very impassioned and distraught over the situation with children separated from their families at the border, but I went way too far. It was wrong and I should not have done it. I immediately regretted it and sincerely apologize to the family for what I said and any hurt my words have caused.”

Fonda found himself in hot water Wednesday after the vicious tweet, where he urged the President’s critics to “rip Barron Trump from his mother’s arms.” 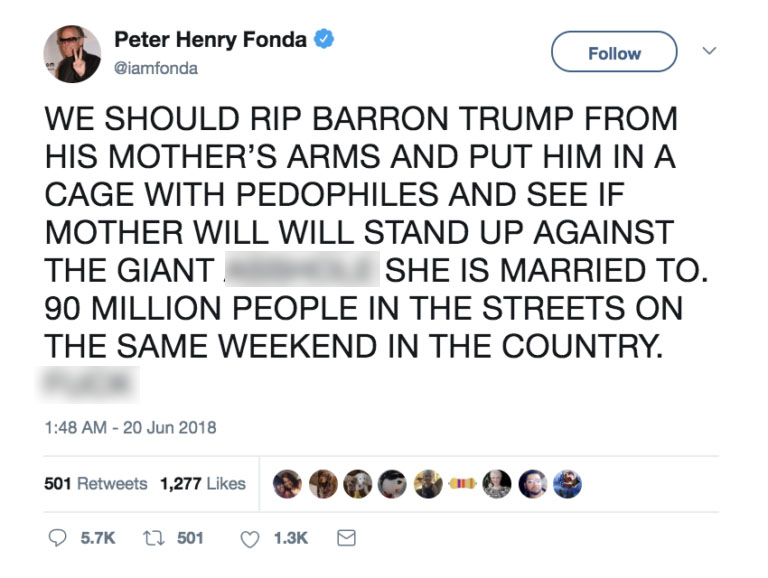 He may have been “impassioned and distraught”, but that is no excuse for the vicious, vulgar comments about an 11-year-old. But remarks like this seem to be the new PR in Hollywood. Certainly, stars don’t need a motive to jump onto the attack-the-president wagon, but in this case, as in so many, it seems to have cropped up when the celebrity happens to have a film about to be released. Fonda is in an upcoming release, as well as appearing in an episode or two of a new series. Increasingly, the press junket is being used as a political platform instead of an venue to promote a film or TV show.