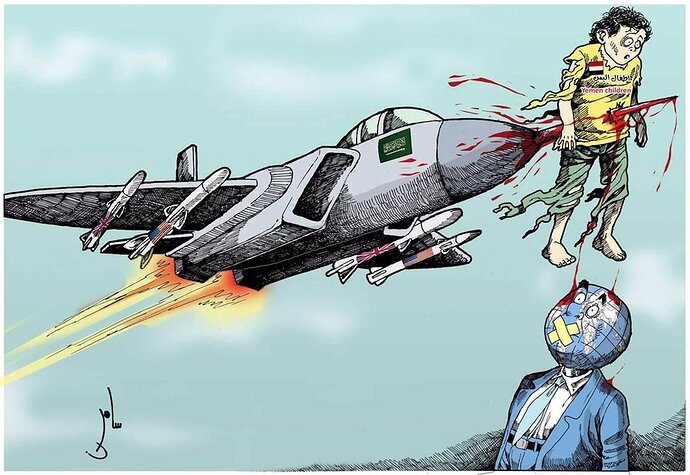 Many may have hitherto been led to believe that the Houthis were a ragtag armed force lacking in sophistication. Many, seeing the drone and missile attacks on Saudi oil plants, may have declared it to be a false-flag attack carried out by Riyadh to... Houthis say they killed or wounded 500 Saudi-led coalition fighters and...

If confirmed, the assault would represent a major victory for the Yemeni rebels and fuel more concerns in Riyadh and Washington about Iran’s influence in the region.

Not surprisingly, not a word about this from either Saudi Arabia or the United States.

The Yemeni Army and Houthi rebels conducted a sophisticated pincer operation after luring three Saudi Arabian brigades into a vulnerable position. The resulting attack obliterated all three brigades and resulted in the death and capture of hundreds of Saudi Arabian officers and men. The remainder escaped in an unorganized and total route.

This, combined with the assaults on Saudi Arabian oil facilities, has the potential to bring the House of Saud to their knees. The House of Saud would be wise to come to the bargaining table and put an end to this war for good, but likely the United States and Israel will not permit that to happen.

That little attack on the refinery didn’t affect us one bit. Better step it up a notch. lol

That little attack on the refinery didn’t affect us one bit. Better step it up a notch. lol

Except this ain’t about the United States.

It is about the House of Saud. Already destabilized by the refinery act. This absolute disaster of the first magnitude is going to rock the corrupt House of Saud to its foundation.

And there is absolute no doubt that this was a defeat of the absolute first magnitude for Saudi Arabia, one of the largest arms purchasers in the world. All their fancy toys could not stop a bunch of poor boy Houthi rebels from obliterating them.

It is clear that Saudi Arabia cannot win and if anything, the Houthis and Yemenese may be able to seize a strip of Saudi territory.

Saudi Arabia needs to negotiate for peace and they need to do it now, if the House of Saud wants to survive.

All their fancy toys could not stop a bunch of poor boy Houthi rebels from obliterating them.

They need more practice is all. lol

It’s also about Iran and their proxies. Yemen itself could not coordinate a basket weaving event much less a sophisticated pincer operation.

The Saudi National Guard has always been a joke.