Help me out with the Statute of Limitations

I keep hearing that various investigations are up against the statute of limitations.

I once thought that the statute kicked in on the date of the crime but I keep being told that in many cases it starts on the date charges are laid.

Does anyone have a good source to explain how it actually works?

Current federal law contains a single statute prescribing a general period of limitations, as well as several statutes that provide longer periods for specific offenses.
Section 3282 of Title 18, United States Code, is the statute of general application. It states that, “(e)xcept as otherwise expressly provided by law,” a prosecution for a non-capital offense shall be instituted within five years after the offense was committed.

Statute of limitations starts from when the crime occures.

See Bill Cosby as prime example A. he could only be charged for one crime since the others were outside the time frame.

See The Don as example B. A woman was filing a civil claim against him over an alleged rape or some sort of thing. No criminal charges could be filed as it was outside the limitations.

The way I’m reading the statute 5 years is the minimum.

I’m guessing it’s like state statutes. For example murder in most states has no statute of limitations.

Correct. Same with the fed.

That’s how I read it, from the date the crime was committed. State laws will vary of course.

Yes, and the clock start ticking when the crime is committed.

Utah supreme court ruling recently said that in a sexual assault the defendant was “identifed” by DNA profile in an information charge within the statute of limitations. Once the defendant was personally identifed as matching the DNA profile he was served with the information report personally and was convicted. Utah Supreme Court said Utah law doesn’t say they have to be identifed by name.

So on sex assult in UT the clock starts ticking when they are identified, not when the crime occurs? I’m good with that.

No when the crime occurs.

Guy tried to claim he wasn’t charged within the statute of limitations time limit. State said you were charged by DNA identification. Supreme court said that counted for charges being filed against an identifed suspect. 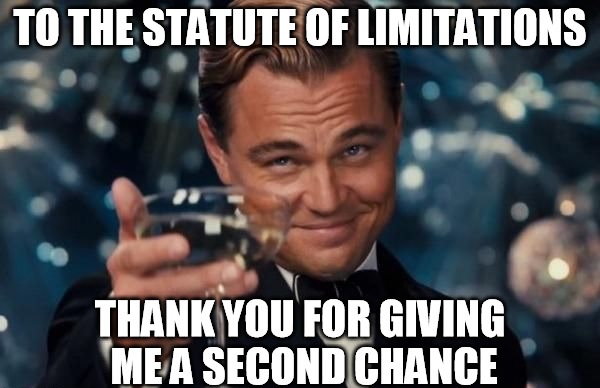 Oh I get it. The collected the DNA at the time but did not match it till later.

I’m good with that too.

That’s how I read it, from the date the crime was committed. State laws will vary of course.

If the perp can be actively connected to the crime post when it was committed, the date of SoL may change.