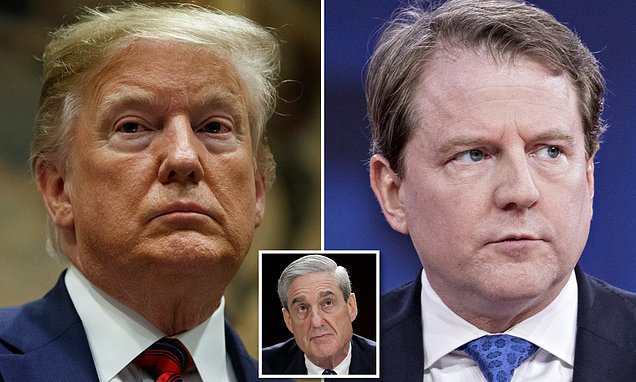 “McGahn told Mueller that Trump asked him to fire the special counsel twice, but backed down when the ex-White House counsel threatened to resign”

McGahn was smart to refuse Trump’s unlawful request. It saved both McGahn and (at least temporarily) Trump.

Btw, have any of you ordered your lawyer to fire the guy that was investigating you. If so, was that legal?

Btw, have any of you ordered your lawyer to fire the guy that was investigating you. If so, was that legal?

You needed a lawyer because some guy was investigating you? Damn dude…what’d you do?

So then Trump did fire Mueller? I thought Mueller just finished his investigation after not finding enough evidence to say there was collusion/cooperation and after deciding he couldn’t decide there was or wasn’t obstruction.
Or is somehow discussing firing Mueller with your aide the same exact thing as firing Mueller?

I question a question that on the surface comes across as stupid? If that’s defending Trump in your eyes…ok…I’m guilty. I didn’t think the OPs question would pertain to majority of us. Maybe I’m wrong? What did you do that instigated surveillance and caused you to have a lawyer over it? I’ve never had this happen and found the question…questionable?

So that’s the spin…they were discussing it…

How’s that Special Counsel investigating H. Clinton getting along? And that FISA request declassification? Oh…and that Mexican check cleared yet?

Just curious. Do you cons believe Trump or McGahn?

Did McGahn say Trump used the word “fire”. Mueller conceded that it was possible that what Trump requested was for Rosenstein to remove Mueller if Mueller had conflicts of interest, and replace him with someone unconflicted, but to let the special counsel investigation continue. That benign interpretation of the facts meant there was no chance of securing a conviction of obstruction
Your OP falsely charscterises what Mueller reported.

How’s that Special Counsel investigating H. Clinton getting along? And that FISA request declassification? Oh…and that Mexican check cleared yet?

and zero national debt. and Trumpcare. and infrastructure. and draining the swamp.

This is one of the most awesome posts I’ve ever seen on hannity.com.

Amazing how so-called ‘patriots’ support a criminally sociopathic individual as the leader of our country.

It is interesting to note that the Daily Mail is a right wing conservative paper that traditionally would carry water for a Republican President.

McGahn’s lawyer, Burck, told White House lawyers earlier this year that his client told Mueller’s investigators that he didn’t think Trump ever obstructed justice…"We did not perceive it as any kind of threat or something sinister,’ Burck told the Times.

‘It was a request, professionally and cordially made.’

According to McGahn and his lawyer, Trump did not obstruct justice. This does hurt the Dem’s case that Trump telling his people to fire Mueller was considered obstruction of justice.

I guess the only things left is the Michael Cohen presidential pardon and the firing of Comey.