Don't really need these assaults on the Pendleton Act 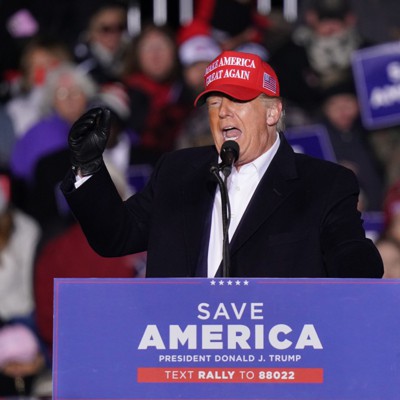 Trump Is Threatening the Return and Expansion of Schedule F

The former president, who is reportedly mulling whether to launch a bid to return to the White House, told supporters Saturday that the president should be able to fire any executive branch employee at will.

First of all, this goes way beyond Trump. This anti-civil service crap is a product of populist bull ■■■■■ not conservatism.

After the assassination of President Garfield by a disappointed officer seeker, Congress passed the Pendleton Civil Service Reform Act in 1883, ending the spoils system and establishing a permanent civil service system.

Towards the end of his administration, Trump signed an Executive Order creating a Schedule F to the Civil Service which would have stripped numerous Civil Service employees of protections. Fortunately, the enforcement of the order was held up by lawsuits and ultimately Trump was never able to remove anybody before he left office. Biden repealed the Executive Order during his first days in office.

Unfortunately, Trump and other populist clones have not give up on this stupid notion. Instead, they are doubling down on it, claiming a unitary executive theory gives the President the unfettered right to remove all 2,000,000+ civil service employees at will and replace them with his political hacks. In other words, a return to the failed and corrupt spoils system.

This should not change.

And even if it was changed, only Congress can do that by amending or repealing the Pendleton Act. The President cannot unilaterally deep six the Civil Service.

Yes, there is concern about bureaucratic interpretations of statute. Congress should respond by passing more narrowly focused detailed legislation, leaving less room for bureaucratic interpretation. Congress’s passage of broad and vague statutes is the genuine point of blame for things that are typically blamed on the so called “deep state.” Do a competent job of legislating and the “deep state” will have little to interpret.

My approach would be 100% the opposite. We should be reducing the number of Officers of the United States, both Principal and Inferior, as well as Excepted Service appointments. Currently, there are close to 9,000 positions of that type. We could and should cut that in half and more. There are thousands of positions in the Plum Book that can and should move from excepted service, non career service, etc. to career status. No other first world nation has anywhere near that number of political appointees.

I believe at a minimum, 500 Schedule C positions could be converted to Career. Plenty of other room to reduce the Excepted Service as well.

Now there ARE changes I would make, but they are aimed at making it easier to remove true deadweight from the Civil Service. The truly lazy and incompetent should be easier to fire.

The problem is that you have Civil Service employees who believe that they can undermine, or obstruct, the policies of the elected chief executive, and his appointees. The elected chief executive should be able to suspend, with pay, any civil service employee accused of undermining, or obstructing policy. A preliminary determination should be made within 30 days, as to whether probable cause exists supporting the allegation of undermining, or obstructing, the policies of the elected executive and/or his appointees. The elected executive, and his appointees are the agents of the voters, empowered by the voters to set and implement policy. The members of the career civil service are not in any way the policy setting agents of the voters.

If probable cause is found, subject to review, the employee’s suspension should be changed to without pay. The existing employment protections allowing appeal of decisions should remain in place, but actively working to undermine the executive and the executive’s appointees should be an automatic termination, with lifetime bar of federal employment.

Lot of text to say Trump has a point.

the president should be able to fire any executive branch employee he wants for any reason or no reason at all. period.

the president should not be anchored to any previous administration for anything. s/he is elected to replace them, not be them.

Willing to obstruct a future GOP Presidents policy is a resume enhancement for hiring by a Democratic admin. Going forward, both parties will play that game.

the president should be able to fire any executive branch employee he wants for any reason or no reason at all. period.

Yes…Every four years, lets have a turnover of 2,000,000 + civil service jobs and have them given to supporters and cronies whether or not they have experience or are capable of doing the job…What could go wrong?

nobody is going to fire and replace 2M workers. that does not mean the president should not be able to fire any one he wants to.

nobody is going to fire and replace 2M workers

Obviously…but nothing would stop him from doing so if he chooses to.

both this act and the apa are unconstitutional on their face and only the courts love affair with the concept of stare decisis keeps them alive. they amount to a kind of "stare decisis imposed on the executive branch. which of course is nothing but a “legal” excuse for courts to allow something they know to be unconstitutional to stand.

I disagree…no matter which party is running the show.

disagree all you wish. we have one elected president. he and he alone is the head of the executive branch. if he thinks any executive branch personnel need replacing, thats what we elect him to do.

Perhaps I’m not fully understanding here…Let me throw an example at you. A POTUS gets elected, and then decides he wants to fire any civil servant that is not registered to his party or is a supporter, regardless of level, right down to the guy who runs your local post office etc…And you’re ok with that?

I agree that they should not be hired and fired by political hacks. The “merit system” however is broken.

nobody is going to fire and replace 2M workers

Obviously…but nothing would stop him from doing so if he chooses to.

Nothing stops a President from not enforcing our immigration laws, apparently. Reversing stupid and dangerous actions by Presidents is what elections are for.

We’re talking about firing employees not enforcing laws…And laws are interpretable, one side may not agree with the others interpretation of them, that doesn’t mean they aren’t enforcing them.

We elect a President not a King.

He’s supposed to do what we say (through our representatives) not the other way round.

I voted for Biden because I was hoping he’d fire the rude IRS person I spoke to in 2018.

Unfortunately, to my knowledge, Janice Tewilliger is still manning the phones, torturing the citizenry with a blend of officiousness and spite.

The fear of putting America First again is real.

We elect a President not a King.

He’s supposed to do what we say (through our representatives) not the other way round.

Civil servants are not our representatives even when they follow lawful orders. I’m talking about legislators.