This is a companion discussion topic for the original entry at https://www.hannity.com//media-room/caravan-chaos-trump-calls-caravan-national-emergency-notifies-military/?fbclid=IwAR19ElStPaKKmtI3HE1n-M5q-zUOxREtSXoMmXaZvUlie93I8NaVHzDQC8s
LouC October 26, 2018, 11:00am #2 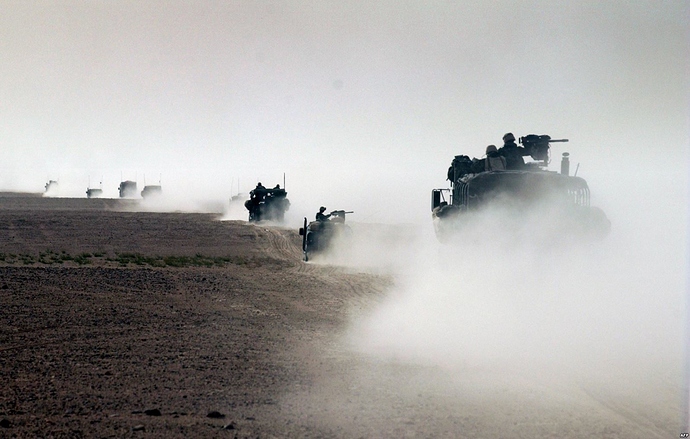 That is a real image of an illegal invasion of another country.

(American forces entering Iraq from Kuwait in the 2003 undeclared war against and illegal invasion of Iraq.)

America needs to be ashamed of itself for the stark and glaring hypocrisies of it’s behaviors!

How many sovereign nations borders have we violated with our invasions, with our military, with our arrogant notions?

We even worked hard at nation building both Afghanistan and especially Iraq, two nations that never attacked us, never posed any real threat to the lives of our citizens, never invaded us.

Yet some, way too many, purely ignorant folks or folks in the end stages of mass denial, are running around “hair on fire” aided and abetted by an insane president’s equally insane rhetoric over a peasant “caravan” of desperate people a thousand miles away hoping for a shot at life redemption in America. Hoping for an escape from evil in their own lands, hoping for a chance at sanctuary from poverty, from corruption, from death in “that place”.

In the place candidate Ronald Reagan once described, in his presidential nomination acceptance speech in 1984, so very long ago: "We raised a banner of bold colors–no pale pastels. We proclaimed a dream of an America that would be a Shining City on a Hill."

So very long ago…

Dumb assed Trump is wagging the dog at a “caravan of chaos” aka a bunch of poorly organized peasants a thousand miles away hoping to come to America for a better life, and his ignorant followers are eating up every bit of his fear mongering rhetoric, eating up every word out of his gutter mouth, wallowing in his trough of xenophobic pablum slop.

Every day I become more ashamed of the Americans who willingly allow (say Congress) and even stand at his rallies and cheer on that scum bucket of a president as he ever further debases this Nation, my Nation, our Nation.