A spokesperson for the DC-area restaurant where Ted Cruz was confronted by Antifa activists Monday night confirmed the Texas Senator returned minutes after the attack; saying the lawmaker and his wife were able to “finish their exceptional meal” in silence.

The local eatery posted an official statement regarding the confrontation after video of the incident surfaced on social media, saying “Last night, protesters entered Fiola with the apparent purpose of confronting one of our guests.”

“When the situation resolved a few minutes later, our guests returned to thank the staff for their support and to finish their exceptional meal,” added the statement.

According to @fioladc chef/owner Fabio Trabocchi, @tedcruz & Heidi Cruz returned to the restaurant they were forced out of last night. After the protestors left, the Cruzes apparently came back and finished their meal in peace. https://t.co/fM967Ow4Zs 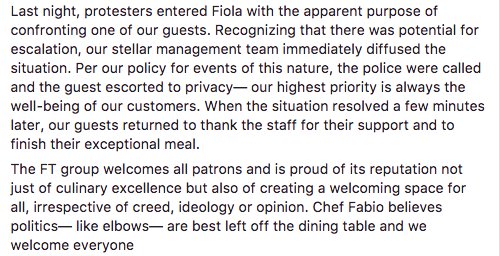 Cruz and his wife are the latest example of prominent Republicans to be harassed in public. Earlier this year, Rep. Maxine Waters urged her supporters to confront senior Trump officials and supporters at “gas stations” and “department stores.”

Well, well, well…not much of an harassment, was it?

I doubt the goal was Cruz’s hunger. They got national coverage and, even though Cruz did eat, I doubt that Antifa would call the publicity a “fail”.

I’m just wondering who leaked his location to the creeps so they could be there when he arrived??

Well, I’m glad about that. I felt bad for Cruz and his wife. That is no way to treat fellow human beings just because of a difference of opinion. I’ll even say that type of behavior is abjectively deplorable.