Interesting article from USCCA on the animation or personification of firearms to demonize them.

Fair use demands I post only a portion of it but it’s worth going to the provided link to give the whole thing a good read, it’s short and to the point and I’d say pretty well written.

Personification is an effective literary tool used as a method for describing something. It is a technique by which human characteristics, qualities or emotions are attributed to something that is not human — or even alive. Personification can add interest to a poem, presentation, advertisement or story. It’s fun to read. It can bring life and understanding to the subject at hand. For example, have you ever heard someone say, “Traffic slowed to a crawl,” or, “The stars winked in the night sky?” We know that cars are not literally crawling around the asphalt like infants. We also understand that big balls of gas in space are not human, and they do not have eyes, so they cannot wink. But we also comprehend what is meant by both statements: Traffic was really bad, and the starlight twinkled.

With that, I would argue that most people know that an inanimate object does not really have feelings, needs, desires or the ability to do human things. We get it. So that is one reason it bothers me so much that people are allowing — and falling for — the personification of firearms. … 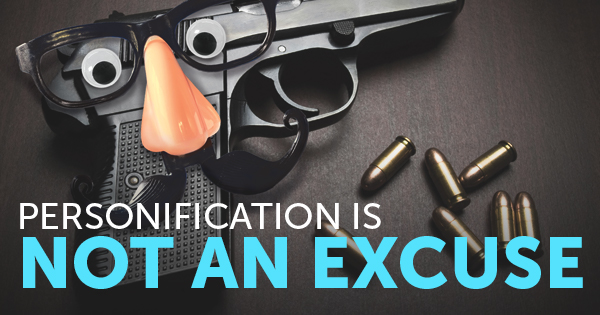 Personification Is Not an Excuse | Pacifiers and Peacemakers - USCCA

We know that guns do not kill people. While they can certainly be used by human beings for malicious intentions, guns are not alive. They cannot commit crimes. They do not have emotions. They do not get angry. They cannot make decisions. Guns do not...

Good find WR, thanks for posting this. The anti-firearm rhetoric is at an unacceptable level.

Good find WR, thanks for posting this. The anti-firearm rhetoric is at an unacceptable level.

And… What is an “acceptable” level? What do you propose be done? Do you feel the same way about the personification of pets?

I don’t really agree that the humans aren’t held accountable. I don’t think anyone is personifying the guns into living things either. That man cut his AR, because he didn’t want it to be used if anything ever removed it from his possession, not because he thought it was alive. He’s not retarded.

I can see why this was written though. You guys have a narrative problem. The same one 2 billion muslims have after someone weaponizes their religion. And you go about it the same way, talking about statistics of car accidents, how the koran didn’t jump out of Mohammad So and So’s pocket and kill his victims, and how only the human is responsible. And that all makes sense if you’re making an argument to a machine.

It’s insulting to the self estimated intelligence of your audience when you’re trying to convince them that guns are not the best way to get a bunch people killed. Maybe it’s technically true that I can kill more people with a knife or a car but you’ve already lost your audience the moment you start fencing with them on technicalities like that.

Insisting something be “done” is the losing hand.

Pets can and very much do act independently, firearms do not.

What would be more acceptable? How about zero demonization of 2nd Amendment supporters and the constant rejection of all of the improvements we suggest that might actually help solve the problem.

It was an absolutely retarded publicity stunt and nothing more. The sole intent was self gratification.

I’ll make a deal with you.

Well, count me out of that deal as a Bill of Rights supporter. I don’t want to lose any of the BOR, especially the 1,2,4,and 5.

I’ll make a deal with you.

What a weird thread.

I keep hoping for the resurrection of 9, 10 too.