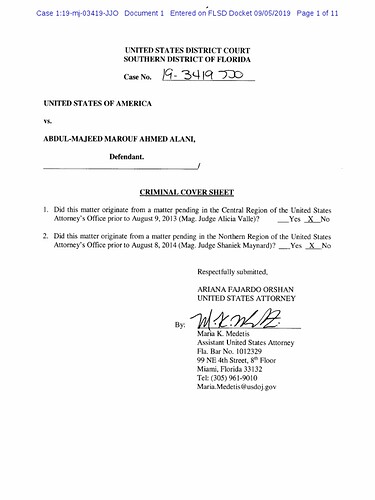 Court documents related to American Airlines mechanic accused of sabotaging plane with 150 people on board over union contract negotiations.

Abdul-Majeed Marouf Ahmed Alani, an aircraft mechanic with American Airlines, sabotaged a piece of navigation equipment aboard an aircraft, which later aborted takeoff after the pilots received an error message. When other mechanics examined the device and realized it was deliberately sabotaged, American Airlines immediately contacted federal law enforcement and after an investigation and examination of surveillance videos, Alani was found to be the culprit.

Evidently, this was an attempt to gain overtime, by forcing the aircraft’s return.

You have to seriously question the intelligence of somebody who thinks they could pull this off undetected and the manner in which he disabled the device would have made it clear to all the act was deliberate sabotage, not equipment failure.

At this time, he faces up to 20 years in Federal Prison on the above criminal complaint. It is possible more charges could be added when a Grand Jury formally indicts by September 20th.

There were 150 people on the aircraft. He could later face 150 Florida State charges of reckless endangerment, which would extend his prison stay considerably, if not practically for life.

I would say some criminals aren’t very bright. The ones taking major American cities for hundreds of thousands of dollars in ransomware attacks are very bright.

That would be a very small number of criminals.

This ass placed his economic well being, ahead of the actual lives of all those on board. He deserves many years behind bars.

It’s not clear whether there was actual risk to the plane and passengers. If so, nail this bastard to the wall, but it is a mitigating factor. 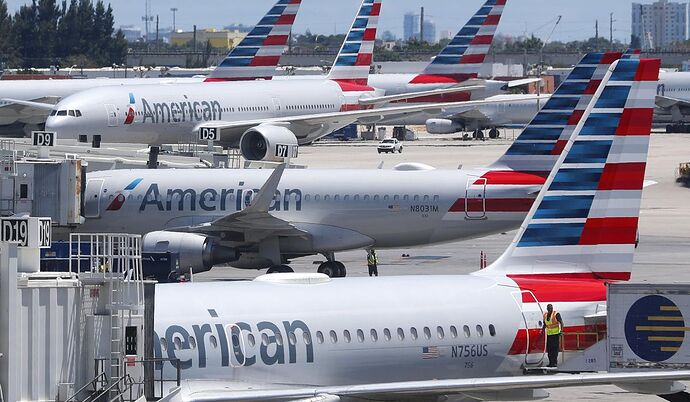 A federal judge cited new evidence of potential terrorism sympathies Wednesday in denying bail for a longtime mechanic charged with sabotaging an American Airlines jetliner that prosecutors say could have caused it to crash with 150 people aboard.

At a detention hearing, during which Alani was denied bail, new evidence emerged concerning whether Alani has terrorist sympathies. An ISIS video was found on his phone. He wired $700 to Iraq and made comment suggesting radical sympathies.

It is important to note, however, that prosecutors have not yet reached any conclusions as to whether or not there was any terrorist motive behind his act. It is merely being investigated at this point and we should not reach too early a conclusion on this matter.

United States Magistrate Judge Chris McAliley continues to preside over this case, a United States District Judge has not yet been assigned.

Alani should be formally indicted by September 20.

I hope he likes the Eastern Slope of Colorado.

Strange method of trying to get “overtime pay”.

That alone is suspect.

Wonder what websites hes been roaming around online of late.

Strange method of trying to get “overtime pay”.

That alone is suspect.

Wonder what websites hes been roaming around online of late.

I am sure the United States Attorney’s Office is presently trying to discern all such facts.

Looks like enough evidence to me to extend his prison stay for the rest of his time above ground.

By clicking on the diagonal arrows, the margins just disappeared!

Patience Grasshopper, in time all will be revealed.

Patience Grasshopper, in time all will be revealed.

Ironically, I had the general sentiment in mind when I originally created this threat.

Note that I did not say a word about terrorism in the OP. Rather, I went solely with what the authorities had developed up to that period in time.

With the new information, I refuse to leap to any conclusion, but am content to wait upon the facts to be concerned.

Too often, liberals and conservatives on this board have made asses out of themselves by ASSuMEing things or leaping to premature conclusions. Than invariably, facts are uncovered which contradict the previous conclusions.

So I will not ASSuME anything regarding this case, beyond what the authorities have turned to this point.

Yes, they have discovered information that indicates possible terrorist and ISIS sympathies.

But the fact still remains that he did check in the cockpit to ensure that the indicator would light, alerting the crew before takeoff.

The bottom line is that I, Safiel, don’t know the final truth of Alani’s motivation and neither does anybody else here. I will wait for further evidence to be released by the F.B.I. before making any conclusions and everybody else should do the same.

We have seen what happens when threads are posted around here without all the facts.

Glad you’ve joined the “Non Leaping to Conclusions” crowd although you were always pretty steady.

He was formally indicted by the Grand Jury yesterday and has pleaded not guilty.

Right now, he faces just the one charge of attempting to disable an aircraft, punishable by up to 20 years in prison. If any of the terrorism accusations pan out, there will likely be a superseding indictment adding terrorism charges.

And again, regardless of what ultimately happens at the Federal level, he could face 150 charges of reckless endangerment at the State level.

Coincidence that on Alani’s phone had references to the crash in Indonesia and information about the plane’s airspeed control system.

If I understand it correctly the particular sensor he tampered with can result in a similar result because the aircraft can’t calculate airspeed and pitch correctly without it.

Alani just pleaded guilty to the one charge.

The United States Attorney’s Office and Alani’s defense counsel, acting jointly, have recommended a 3 year prison sentence. While not binding, most likely the Judge will not exceed it and if he does, I doubt more than 5 years at most.

The State of Florida has indicated they will NOT press any charges in this matter.

I would say some criminals aren’t very bright. The ones taking major American cities for hundreds of thousands of dollars in ransomware attacks are very bright.