Two years after President Donald Trump signed an executive order that he said would “create apprenticeships for millions of our citizens,” not a single apprenticeship program has been created under the program, nor a single person trained.

The Trump admin. has been deadly slow with its initiatives. One of the problems has been its own bureauocracy.

The new “industry-recognized” apprenticeship programs would be designed and operated by private business groups with expertise in their fields. By creating a system outside the Labor Department’s registered apprenticeship program — which historically has emphasized construction and other union jobs — the administration would, the thinking went, be able to cut red tape and encourage businesses to take the lead.

“One of the challenges that we’ve been picking through very methodically to try to draft this rule," a senior White House official told POLITICO, “is understanding how to get the balance right — how to ensure sufficient protections of quality for participating students and participating apprentices, and how to actually provide the smaller employers in particular the flexibility they need.”

The idea was criticized from the start by Democrats, who said it lacked a proper mechanism for quality control.

If this had been “The Apprentice,” Donald Trump would have said, “You’re fired!” Maybe the voters will fire him in 2020. 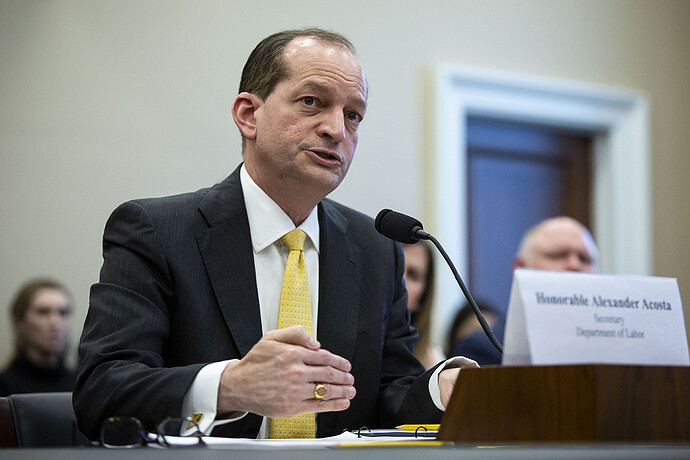 Not a single apprenticeship program has been created under the president's program.

Maybe he was just joking?

The problem is an unpopular president with an unpopular agenda. Elections represent the feeling of the populate and the midterms were telling.

Do libs even consider for a second whether we need apprentices? I understand why Donald Trump would sign an executive order to create an apprenticeship program: it’s good optics. People love the idea of training the next generation to prepare them for life, however is that really necessary? People are living longer and working longer. Do we really need to spend money training young people when there isn’t exactly a drought of qualified people willing to work for you? Let young people get tens of thousands of dollars in debt first and they’ll work even harder in the future.

Inside the Labor Department, much blame for the delays is assigned to Acosta’s former chief of staff, Nick Geale. Geale was especially distrustful of career experts at DOL, according to four current and former DOL officials, believing them to be hostile to the policies of the Trump administration and the source of many leaks. Under his leadership, career staff were given as little as an hour to read drafts that exceeded 100 pages, and were prohibited from making changes to rule-making documents.
One staffer recalled receiving a draft of the apprentice rule riddled with errors, and with an entire section repeated. When staff pointed out the errors, this person was told the draft could not be changed. On a separate occasion, staffers were told to write a preamble for the rule within a week, but senior officials refused to explain what some of the required terms and provisions meant.
Tensions ran so high that OMB eventually stepped in to review Geale’s scorched-earth management style. The White House last month ordered Acosta to fire Geale after concluding that Geale wasn’t moving moving fast enough to implement the administration’s deregulatory agenda — including the apprenticeship rule — and that his combative style was eroding employee morale.

But let us blame libs because God forbid that any part of this administration take responsibility for their failures.

Remember when Obama signed EOs that all of them were unconstitutional and were means for impeachment?

Why are we blaming libzes for this?

Sounds awfully familiar to what the GOP did to Obama starting the day he took office. Except Ds gave Trump border money, and were willing to give him more. He decided he didn’t want it.

I thought we were in the middle of a National emergency? C’mon fat donald, build that wall that Mexico was supposed to pay for!

Trump’s acting cabinet is the pilot program for apprenticeships.