Why Does Trump Continue to Lie About Easily Verifiable Claims that He's Made Publicly?

As Trump seeks to discredit Bob Woodward, he was on Fox and Friends telling self evident lies about his foreign policy, specifically with regard to assassinating Assad:

He’s been doing this regularly for years, of course, as in the case of the McCain stuff a week or so ago: 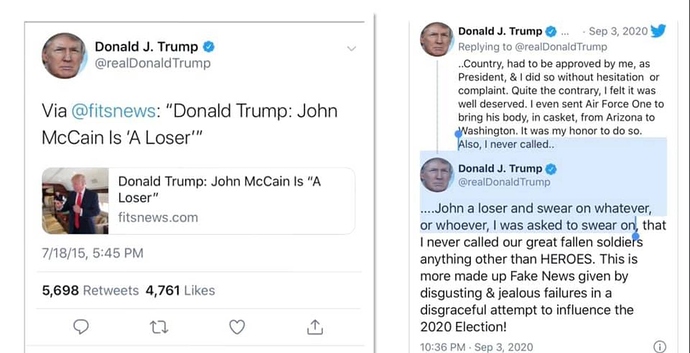 On the old board, I had a whole thread about this categorically different kind of Trump lie: a granular form of gaslighting (i.e., “I never did or said the thing you claim that I did or said, even though there’s objective proof and you witnessed it”). Why? I don’t let people who do this anywhere near me, if I can avoid it, let alone into the White House. What’s his problem? Doesn’t this seem like the behavior of a toxic, disordered personality?

4 posts were merged into an existing topic: Did Trump disparage veterans?