When it's all said and done what will the actual cost be for all the rioting, looting, arson etc? Walgreens among the first to report its losses from looters as Philly’s...

Keep in mind the 75 million is just one company’s uninsured losses, there are hundreds, maybe thousand of more businesses who have suffered losses and who knows what that total will look like when it’s all said and done.

Who is it that will pay? Well it’s the people who have lost their jobs as their businesses have been destroyed or shut down and for those that can remain in business, particularly the big chain stores it will be the customers.

Does anyone actually think it’s worth it? We’ll be footing the bill for all this violence for years, maybe even a decade or more.

Its all insured, why it wouldn’t be insured is stupid America need better laws.

We went through this already re: the insurance. It’s not that simple which is why the argument of let the people burn it all down, it’s insured was lame as hell and a cop out.

No it isn’t. You cannot insure against losses due to acts of violence from civil unrest, or invasion.

No it isn’t. You cannot insure against losses due to acts of violence from civil unrest, or invasion.

Why not seem stupid.

Because there is no possible way for the underwriters to calculate the risk or come up with an appropriate rate to insure against it as a result.

Because there is no possible way for the underwriters to calculate the risk or come up with an appropriate rate to insure against it as a result.

Good point. Furthermore how many insurance companies are going to be willing to insure any company in these inner cities? Those that do I would assume will have policies that are very narrowly defined.

Here’s an article about this: 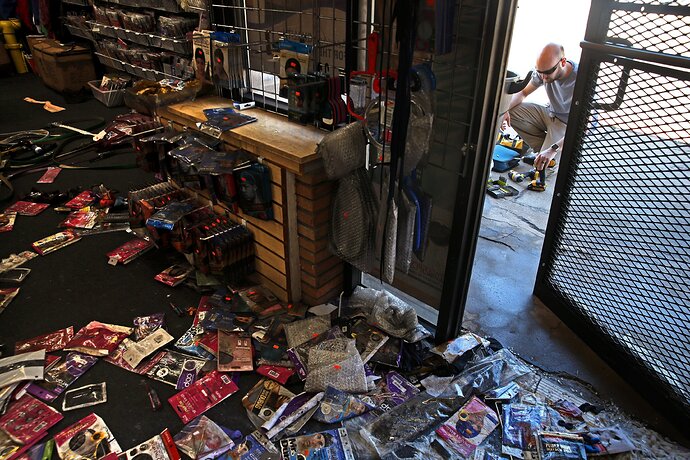 Insurers May Rethink Property Risk After Unprecedented Losses From Riots

Well they already have it covered. They aren’t required to cover those types of losses for the above stated reasons.

If they were forced to do so the rates would have to be so high no one could afford the coverage.

As it is now you can buy a rider that covers those types of losses but they come at confiscatory rates with huge deductibles.

Oh, the cost to the Dims is going to be way higher than that.

Those Suburban White Women that they love are buying guns…, lots of guns!

If I could have injected any phrase into the Lib narrative, “Defund the Police” is BETTER than that!

Even light in the loafers Greg Gutfeld screamed that he bought a gun.

The shark has been jumped, and the Dims are gonna pay at the ballot box.

Over eighty percent of my students this summer have been women.

Democrats are shooting themselves in both feet.

We have laws like dont steal and commit arson.

Defund the Police, and confiscate the guns…

They see where they are trying to go, but they have no clue about side/unintended effects.

This is a good thing.

Mexico? The same way they didn’t pay for the, not finished, wall on the southern border.

Does that mean there has been a significant drop in the number of men attending this summer?

Would be such a different conversations and different media coverage of the rioting and damage if it was caused by groups that we saw in Charlottesville.

But “The soft bigotry of low expectations”. Some groups do what they do, violence, looting, robbing, setting cities on

look the other way and don’t speak of it

Its all insured, why it wouldn’t be insured is stupid America need better laws.

What will the cost be?

A nation. If we give in.

These municipalities around the country created the environment for these riots, didn’t back their police but did the rioters and have now made their bed that they now must lie in. It’s unfortunate that so many innocent lives have to be so disrupted by the actions/inactions of their elected officials but…“elections have consequences”. Either stand up for what’s right and elect better people or move?

And make money when they don’t.

Isn’t that why you buy insurance.