What would you say to the "Truth and Reconciliation Commission?"

An official government interrogation and condemnation of the party that just lost power. What dictator wouldn’t do that?

How about “reeducation camps”?

Would it trigger cons?

Seriously, if it was OK for the President of the United States to muse about the press as the “enemy of the people”, why is it not OK to talk now of re-education camps. We’re just talking about it and it trolling the cons is legitimate public policy, no? So, thanks for bringing it up as an option.

In light of 4 years of Trumpsplaining this is funny no matter who you are.

How does the saying go? “If you aren’t guilty of anything you shouldn’t fear an investigation.” Investigate all you want, Trump is as safe as a newborn kitten.

Sure. But what should the rest of us say to the commission?

“I apologize. What the hell was I thinking?”

He was just kidding. Or being sarcastic. One of those.

The problem with these “Truth Commissions” is eventually, they turn on their creators.

They already replied to Senator Johnson and reminded the Senator of their previous statements regarding Russian efforts to sway our elections, in the context of investigation the laptop.

Why, I wonder, did the FBI feel a need to remind the good Senator of that? 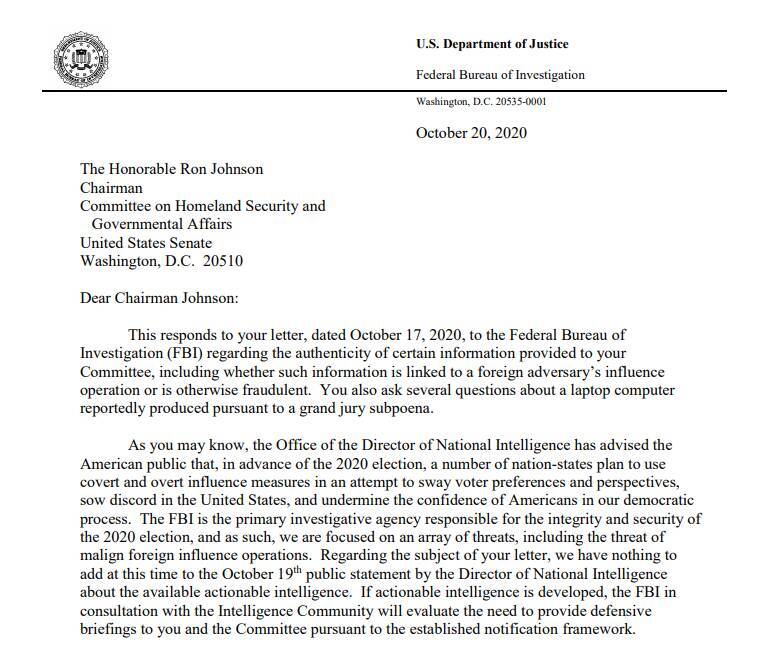 Whatever, dude. He could. He’s got a few months depending on how the election goes.

I hope he does.

Isn’t that exactly what the Trump admin promised they would do? Pretty sure the current President was demanding his predecessor and current challenger to be indicted for imaginary crimes even a lickspittle AG cleared them of.

If the Trump administration is investigated by a Biden administration and there is clear cut evidence of criminal activity , should they not be prosecuted?

Whatever, dude. He could. He’s got a few months depending on how the election goes.

I hope he does.

Think it’ll be as damning as Durham?

I think it’ll show dirty tricks the least offensive of which is Rudy being a tool of the Russians.

I doubt it’s that, though. This is way, way too clumsy for the Russians.

Yes, that’s the part the supporters of the President almost universally focus on.

BTW, did you hear about the President’s bank account in China? And the LLC that recorded 5 times the normal amount of revenue in 2017. And that Trump withdrew almost all of the five the normal times in 2017? It was in the news recently.

Remember the Steel report that mentioned the pee tape that all the President’s supporters obsess on?

mccarthy would be proud!

Which IG’s did he fire?

That’s not what I hear…why hopes are still being pinned on “why Trump voters” to confound the polls again.

If the Trump administration is investigated by a Biden administration and there is clear cut evidence of criminal activity , should they not be prosecuted?

The self-proclaimed law and order president is all about exposing corruption. He’s clearly innocent of any wrongdoing so he should push for this. Once his admin is cleared of all crimes it becomes a massive PR win as he beats his breast in lament:

“Do you see how they treat your favorite POTUS, Me? Always so mean, always so unfair!”