Utah voters about to do something incredible

Now the legislature over the years has made it more and more difficult for the citizens to overturn laws.

Here is what is required:

Petition must be filed within 5 days of the end of the legislative session (regular or special session). Must have 5 registered voters who have voten in a general election in the last three years.

Once the petition is approved, the law has very specific language on wording, spacing, binding, and that a copy of the law must be in the signature packets (and each packet can only have room for 49 signatures).

Once the packets are printed, then the Lt. Governors office has 5 days to approve and number then and return them to the petitioners.
(keep in mind we are now more than 10 days past the end of the legislative session since a packet is produced for approval from the Lt. Governs office, THEN the printers can start doing more).

You have to state if it’s going to be a volutary effort or a paid effort or both. If you choose all voluntary, you can not pay anyone to collect signatures.

Registered voters MUST sign in person. No electronic or email signatures accepted. they must be on an official packet.

Packets MUST be turned in to the county office 14 days after the first signature, and all packets must be in 40 days after the end of the legislative session.

To put the law on hold until an election:

Now why the title?

Utah legislature held a special session Dec 21st and passed a tax reform bill. A bill so bad that Liberals hate it. Conservatives hate it. Libertarians hate it.

A referendum (all voluntary) was started with only donations for printing packets, and volunteers to collect signatures. The volunteers had 30 days (remember the 10 day thing earlier to petiition and get approval?) to collect the signatures.

Yesterday (Jan 21) at 5 pm was the deadline. A couple of statewide grocery chains offered their buildings for tables for people to sign. many businesses offered their locations.

Now here is the kicker.

We the people had 40 days to get signatures to challenge the legislature.

In 14 days the names of everyone who signed (and is verified) the petition will be posted on the internet. Opponents then have 45 days (longer than citizens had time to collect) to put pressure on people to fill out a paper saying they really didn’t want to sign).

If after that 45 days, the 116k and 15 counties still is met, the law will be put on hold until Novembers General election.

How’s that for incredible? (the gathering of that man signatures by volunteers in 30 days)

That is crazy. I would never vote for people who put so many restrictions on direct democracy trying to neuter it.

More to the point…what’s the problem?

Less income tax for people, more sales tax. (And I admit I’m surprised they tax groceries. I thought groceries were sancrosanct in all states.)

But this could be key to getting rid of income tax altogether and getting money from sales tax alone.

The bill approved by lawmakers cuts Utah’s income tax by roughly $630 million, according to legislative estimates, through a reduction in the income tax rate, an increase to the per-child dependent exemption and the creation of new tax credits.

But it also raises the sales tax by $475 million, primarily by increasing the tax on grocery sales and adding new taxes to the sale of motor and diesel fuels, resulting in an overall tax cut of $160 million.

The practical result of those changes is a shift of roughly half a billion dollars of state revenue away from income taxes — which support education — and toward the unrestricted General Fund.

Legislative leaders say that shift is necessary to correct an imbalance between the robust income tax and the comparatively more sluggish — but still growing — sales tax, as well as to bypass the income tax’s constitutional restrictions and provide lawmakers with greater flexibility in setting the state’s budgets. 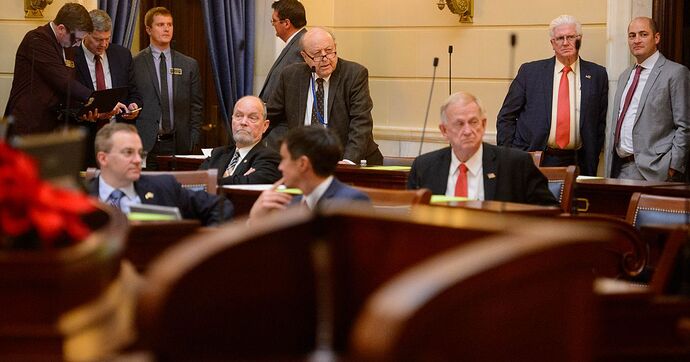 Utahns can expect to see bigger paychecks and bigger tax returns next year, but also a bigger bill for their groceries and other purchases, after lawmakers approved a package of new tax laws during a special legislative session Thursday.

That is crazy. I would never vote for people who put so many restrictions on direct democracy trying to neuter it.

It’s an opportunity. Let Utah try it. If it’s a disaster, then it will serve as a warning to other states.

Reasonable is very vague. In Michigan, I have seen Republicans attempt to dismantle our voter proposal process as “reasonable” restrictions. While I agree the unrestricted DD is not a good idea, we need to define reasonable.

Is it the method in voting/collecting the signatures that make it reasonable? I know Florida requires 60% to change their constitution, but here in Michigan it requires a simple majority vote of the people.

Just curious as to what you think is reasonable…

Reasonable is very vague. In Michigan, I have seen Republicans attempt to dismantle our voter proposal process as “reasonable” restrictions. While I agree the unrestricted DD is not a good idea, we need to define reasonable.

Is it the method in voting/collecting the signatures that make it reasonable? I know Florida requires 60% to change their constitution, but here in Michigan it requires a simple majority vote of the people.

Just curious as to what you think is reasonable…

I am mostly thinking process, rather than issues.

Just found this on Facebook. Don’t know that I trust the fools on the Hill to follow up with the will of the people. https://fox13now.com/2020/01/23/utah-legislature-will-repeal-tax-bill-in-the-face-of-referendum/?fbclid=IwAR0ltdEVj1rzKowidw_EFvsQmIGO0BpezPCIP8GGDd21c0YbfwKmMvVV_-E

Different people don’t like the bill for different reasons.

It’s NOT a $630 million dollar tax cut. After the new taxes, it’s a cut of around 60 million dollars for mostly those who are below the federal poverty limit. The republican leaders here are turning more and more like liberal democrates every passing session.

Were there things I liked about the bill? Yes. Where there things that I disliked? Yes. Part of my problem was they held a nearly year long “road show” with a slick presentation and got public comments. Majority of the comments they got around the state were against what they were doing, and the went ahead and did it anyway. Then once they got the bill and the special session to pass it GASP . . . they couldn’t because some lobbiests convinced some legislators that their “services” was special and shouldn’t be taxed.

So the special session was put on hold for 45 minutes (they all sat around and gabbed) while the bill was re-written then voted on. They didn’t have time to read it. Citizens didn’t have a chance to know what the changes where.

Latests figures show that it looks like it will be a clean sweep of enough signatures in every county in the state – that just doesn’t happen.

But the Legislature leadership and the Gov have now announced they will submit a bill Monday when the new session starts repealing the legislation so the state doesn’t have to go through the expense (and embaressment) of a referendum on the bill.

Some legislators have already figured out Utah Citizens are pissed off.

They have introduced a bill that if a citizen initiative is passed, if the legislature modifies or repeals the law (within a certain time frame), the modifications have to go back to the people for approval before it can take effect.

Our legislature has done that multiple times over the last few years. An intitive gets on the ballot, and the next legislative session they change it with no fear.

30 days to collect signatures state wide and hit the county and number of signatures is not reasonable (not to mention then giving 45 days for opponents to pressure those that signed to pull their signature).

I’ll be watching the legislative page to see if it a straight repeal of if they try and add funky things to it.

The legislature is running with their tails between their legs. This year all our house of representative members are up for re-election, and 1/3 of the senate (just like national). They know they pissed off the people who can put them back in office and they are scrambling.

I’ll be watching, too. They’ve really gotten to the point that they seem to just do whatever they feel like doing, so it’s good to see that they’ve had this wake up call. I just hope that people will actually have the guts to vote out the Congresscritters responsible for this mess.