Anyone who ever did any actual fighting in Iraq has known about the chemical weapons for years now. There have even been obscure press releases about it when it happened that have long since disappeared.

I don’t understand why though? Why keep something like this a secret when it was supposed to be such a big part of the invasion in the first place? Did they need more studies on the exposure effects?

A lot of people I deployed with are already having physical health issues from being over there, even though they were fine when we got home. Hell, two of my buddies have had heart attacks and both were barely 30. 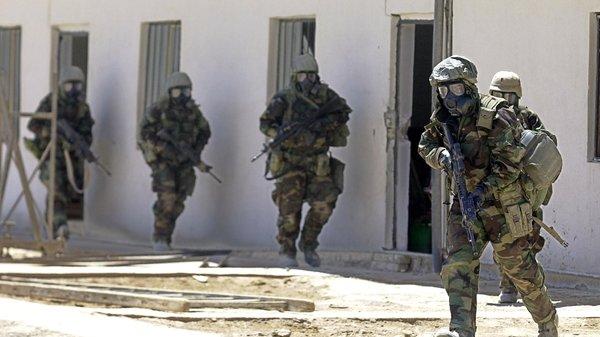 American troops found nearly 5,000 abandoned chemical weapons in Iraq from 2004 to 2011, but their discoveries were kept secret by the U.S. government, the New York Times reports.

"'Nothing of significance’ is what I was ordered to say,” Jarrod Lampier, a retired Army major, said of the 2006 discovery of 2,400 nerve-agent rockets at a former Republican Guard compound, the largest chemical weapons discovery of the war.

There’s this part of the story:

Among the reasons for the secrecy? “The discoveries of these chemical weapons did not support the government’s invasion rationale,” Chivers writes. “After the terrorist attacks of Sept. 11, 2001, President George W. Bush insisted that Iraqi leader Saddam Hussein was hiding an active weapons of mass destruction program, in defiance of international will and at the world’s risk. United Nations inspectors said they could not find evidence for these claims.”

The discovery of pre-Gulf War chemical weapons — most of them “filthy, rusty or corroded” — did not fit the narrative.

“They needed something to say that after Sept. 11 Saddam used chemical rounds,” Lampier said. “And all of this was from the pre-1991 era.”

This stuff has been known for some time now. Your article is from 2014.

We’ve know about the decades old weapons caches for years. Though another poster beat me to it, those were not the cause for the invasion to begin with.

People were wounded by these weapons. That BS reason for keeping it secret is just that, and it stinks of the Gulf War sarin gas incident.

“Saddam buried some old chemical weapons in the desert” was not the rationale for taking out Saddam.

There would have been no public support for that.

And again, since when were these kept secret?

If you’re expecting me to defend the decision of the Bush administration to keep this secret, you’re barking up the wrong tree.

I agree with you.

That’s a wild-ass assumption that I’m looking for an argument here. As a matter of fact, I’m merely asking questions out loud about why the need to keep these incidents a secret, especially knowing that Soldiers have been contaminated by those weapons.

Some Soldiers even carry meritorious citations for their part in the disposal of biological and chemical weapons. There’s no valid reason for this secrecy to have occurred.

…why the need to keep these incidents a secret…