Do they really want to make that comparison? Really?

Let’s start with a few facts.

Unlike Benghazi they removed the Ambassador and diplomatic staff long before the attack began.

Like Benghazi, the attackers penetrated the outer wall defended by the locals.

Unlike Benghazi not a single US national was killed and they didn’t penetrate into the embassy buildings.

Do the dem’s and their cohorts in the media really want to go there?

Links please. I did not see this. Thanks.

I saw some things and now here I am

Maybe the additional protections were a direct result of failure in Benghazi?

Benghazi didn’t happen at an embassy which are 100x more secure then consulates.

also the Embassy in Iraq is the one of the most secure buildings in the world.

As a result our diplomatic staff were never under threat here.

The facility in Benghazi was not even up to the standards that existed at the time. It could only be kept open on orders of Hillary and Obama as a result.

The standards were set by the commission after the series of attacks during the Clinton administration.

I’m supposed to provide links to all the MSM talking head shows?

Some great examples here in this article. 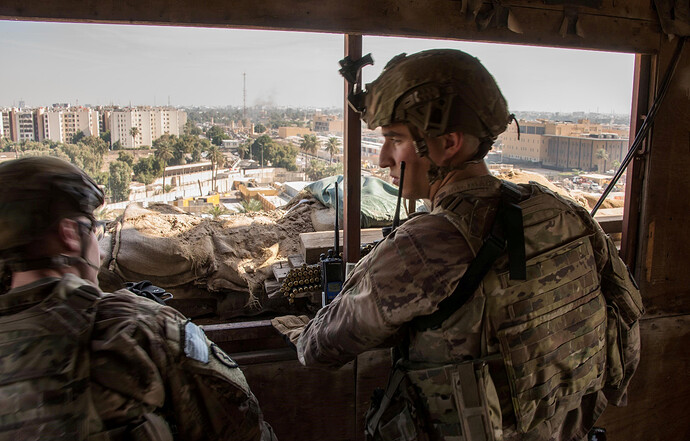 Trump's Benghazi? That's What Liberals Are Saying About Baghdad

No one died in the New Year's Eve incident...

I saw some things and now here I am

You’re supposed to keep those things on the down low

I love the liberal press…in that…they don’t even try to hide their blatant partisanship anymore. Does anybody consider them a fair and balanced, neutral source of actual news? Anybody?

Go ahead and then tell me your conclusion to the question I just asked?

Links please. I did not see this. Thanks.

Strange. Neither did I and I was watching CNN most of the day. Also a google search shows nothing except Fox’s “The Five” saying the term

Some great examples here in this article

We’ll need seven or eight investigations to get to the bottom of this.

I’m supposed to provide links to all the MSM talking head shows?

Not being able to back up ones assertions is a sure sign of having nothing. It should be extrememly simple to at least give a name that proves these statements were made. A google search shows that The Five used the term this morning but that’s all that comes up

We’ll need seven or eight investigations to get to the bottom of this.

Mueller and Horowitz are available.

Use what ever source you chose. But most people use FOX.

I have heard the term Benghazi used at least ten times. And as you know, I don’t make things up. But you are free to believe what you choose.