“The relationship between military and economic strength is intimate and indivisible.”

So was the belief of the newly inaugurated President Dwight D. Eisenhower in January of 1953. Among the major reasons Eisenhower had been elected, the central reason was personal. This was the man who was the leading American general of World War II. There were others - Patton, MacArthur, Bradley. But without question, the man who had planned and executed D-Day - the massive Allied invasion of Europe on June 6, 1944 - was in the White House because Americans believed he was the solitary figure of the day who could bring a stop to the Korean War.

On the campaign trail in October of 1952, Ike devoted an entire speech to the military disaster that had begun with the invasion of South Korea by North Korea on June 25, 1950. The key line: “I shall go to Korea.”

Eisenhower did just that after his election and before his inaugural. On July 27, 1953 - just over six months to the day from his taking office - the Korean Armistice was signed and the war stopped. The two Koreas retreated to their respective sides of the 38th parallel - where they have remained to this day.

But what is it that Eisenhower did that brought a halt to the war? What is it that Donald Trump has done that Trump’s immediate predecessors refused to do?

Here is the late historian and Eisenhower biographer Stephen Ambrose on Ike and the end of the “hot” war in Korea, bold print for emphasis supplied:

“…Eisenhower wanted to increase the psychological pressure on the Chinese. He intended to let them know ‘discreetly,’ that unless the armistice negotiations resumed and satisfactory progress was made, the United States would ‘move decisively without inhibition in our use of weapons…We would not be limited by any world-wide gentleman’s agreement.’ Unleashing (Taiwan’s leader) Chiang was a part of the pressure; so was Eisenhower’s announcement that he was increasing military assistance to the ROK (the Republic of Korea, the formal name for South Korea); so were his frequent statements that the situation in Korea was ‘intolerable.’ But the greatest pressure, by far, was his own reputation. The Chinese were fully aware that in the war against Germany, Eisenhower had used every weapon at his disposal. They knew he had atomic weapons available in the Far East, that he would not accept a stalemate, and that he was not demanding their unconditional surrender, but only that they agree to an armistice. The substance behind Eisenhower’s threats was Eisenhower’s reputation, backed by America’s atomic arsenal.”

Without a doubt, the greatest asset President Trump brought to the problem with North Korea was exactly what Eisenhower brought - his reputation. A reputation that came to the fore in his battles to get to the White House - a reputation that made clear Trump was more than capable of using “every weapon at his disposal” to win the presidency - and to run it once he had won. To borrow from Ambrose: “The substance behind Trump’s threats was Trump’s reputation, backed by America’s nuclear arsenal.”

Recall the smelling salts that were needed when Trump said this, as headlined by the New York Times:

Trump Threatens ‘Fire and Fury’ Against North Korea if It Endangers U.S.

The Times story, clearly horrified, said, among other things, this:

“In chilling language that evoked the horror of a nuclear exchange, Mr. Trump sought to deter North Korea from any actions that would put Americans at risk. But it was not clear what specifically would cross his line. Administration officials have said that a pre-emptive military strike, while a last resort, is among the options they have made available to the president.

Mr. Trump’s stark comments went well beyond the firm but measured language typically preferred by American presidents in confronting North Korea, and indeed seemed almost to echo the bellicose words used by Mr. Kim. Whether that message was mainly a bluff or an authentic expression of intent, it instantly scrambled the diplomatic equation in one of the world’s most perilous regions.”

And Democrats? The Times reported that Democrats in Congress said: “they feared Mr. Trump was blithely marching the United States closer to a costly war.” And there was this: “Senator Benjamin L. Cardin of Maryland, the top Democrat on the Foreign Relations Committee, said that Mr. Trump’s comments showed that he ‘lacks the temperament and judgment to deal with the serious crisis the United States confronts.’”

The clear fact of the matter is that Trump, like Eisenhower before him, was dealing with the utter failure of predecessor policymakers in dealing with North Korea and China. For Ike that meant the Truman administration, for Trump it meant 30-years worth of presidents from both parties failing to get the job done.

Now? Now the world has changed overnight because of the vision - and the strength - of an American president in dealing with Korea. There is a long, long way to go. But without doubt, President Donald Trump, like President Dwight Eisenhower before him, has brought this change because like Ike, Trump brings his own reputation for willing to use every weapon at his disposal to win the battle at hand - and in the case of nuclear missiles in North Korea, that includes a massive American economy and a nuclear arsenal that dwarfs that available for Eisenhower’s use in 1953.

Another American president - who also was accused of reckless rhetoric and an alarming willingness to threaten the use of American economic and military power -had a phrase that summed up the Eisenhower, Trump and his own approach to dealing with America’s adversaries.

The views and opinions expressed in this article do not necessarily reflect the official position of Sean Hannity or Hannity.com

Hey, forgot about ol’ Jeffrey Lord. He was one of the more entertaining unhinged Trump sycophants on CNN. 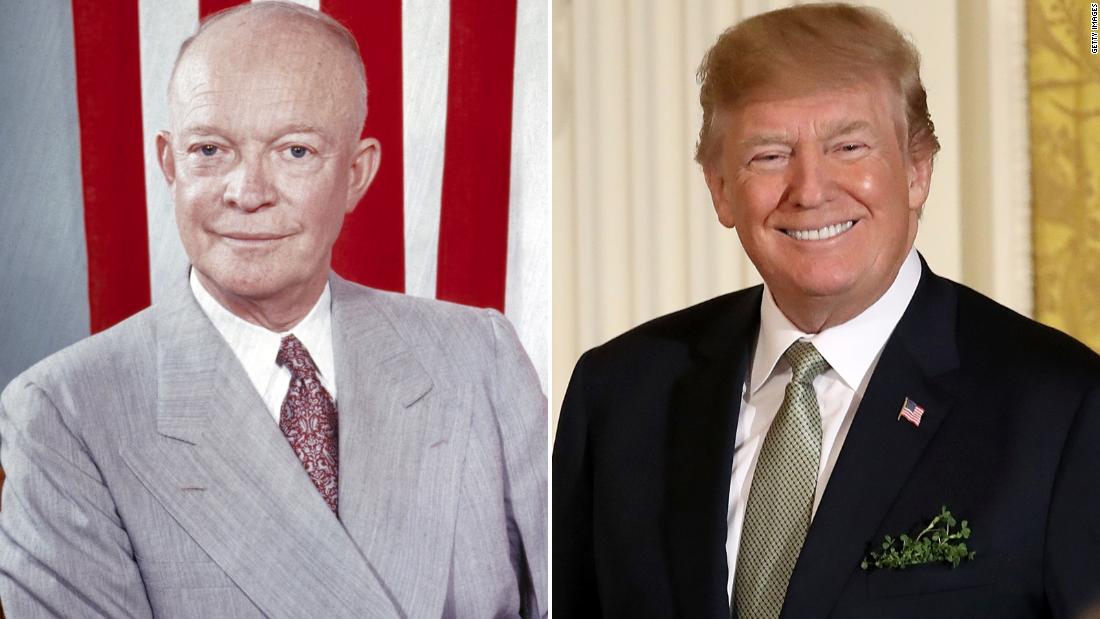 The Republican President who really made America great

Both Donald Trump and Dwight Eisenhower ran for office as Republicans and novice politicians, says William I. Hitchcock. But while Ike's discipline made mid-century America into a global powerhouse, Trump's chaos threatens to leave it weakened and...

In the 1950s, Dwight Eisenhower led what was arguably the most disciplined presidency of the postwar years. Like Trump, Ike had never run for office before he became a Republican candidate for president. But he came into the White House with immense leadership experience, having led the allied forces that defeated Hitler in Europe from 1942 to 1945. He brought a disciplined mindset into the White House that reflected that military background.

This is one of the funniest things I’ve read at this site yet.

All we need is a Trumper come into the thread now and dedwnd this.

Remember Trump’s praise, during the campaign, for “Operation Wetback”, the little anti illegal immigrant campaign of mass deportation brought to the streets of America by Eisenhower.

Yeah. They do have that in common, desire to mass deport people.

That and neither Predident brought peace to the Korean peninsula.

Oh, and Ike, like Donny, took every chance possible to run off to play golf.

No. George only had wooden teeth. Donny has a wooden head.

The bot posted twice on this subject? So annoying.

Ayup. Saw that after I had posted.

Funny they can shut down the edit function but can’t seem to constrain that but any?