Thank you. Honestly I am not to disheartened by losing the house. If there was a leader in the house that we were able to fight for, I believe my sentiment would be different. We have watched the house wobble from one lousy leader to the next. Pelosi to Boehner to Ryan back to Pelosi. If there was a Gingrich in there would make this harder. Who knows this period with crazed Pelosi might jumpstart Republicans to find a good leader.

Even the republicans didn’t want Gingrich.

Nothing and I mean nothing can ever be said to make dear leader look bad.

And from the other, perhaps majority view in this forum, the orange Orangutan can do nothing that doesn’t constantly prove him the enemy of the people.
I just got a mailer frm my Congressman showing himself with a picture of Trump. He knows whether that works to his benefit or not.
The question is not whether Republicans keep the House or not, but whether Trump helps or hurts those chances. Overall, I’m not sure its that easy to tell. Individually, candidates who want to identify with him probably have a pretty good idea.

Having a photo with trump is not an indication of what someone “knows.”

Democrats had a good chance of flipping the Senate before kavanaugh. Now it looks more like Republicans will squeak by.

Um…no. It’s been about 85% likely to remain GOP from the beginning.

Reason? Not enough GOP-held seats up for election this year.

FWIW, 538 predicts only a 15% chance of the Democrats flipping the Senate, so yeah. It would be a dramatic surprise.

The incumbent always loses the House, then blame the democrats for everything.

Everything. Okay blame them twice as much because trump already does so.

You knew what they meant, don’t be silly.

A new Fox poll shows that Trump is more popular in the battleground states than the Republican Senate candidates in those states. North Dakota and Tennessee are the exceptions.
Any of the winning Republican Senators from those states are likely to be very deferential to Trump, IMO. 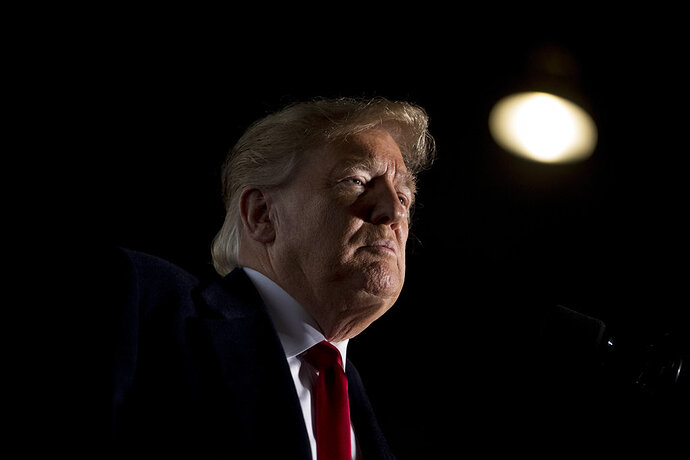 A new round of Fox News battleground state polls proves we don’t call them battlegrounds for nothing.

Donald’s going to pull these lame duck establishment Republicans over the finish line.

The good news is, once they realize he saved the House, the Senate, and their miserable careers they will be less inclined to thwart his will.

Sort of like Hillary losing. Democrats are still in denial over that loss.

.>
.
.
So I’m curious how Trump is going to spin the mid-terms as a major victory and a mandate for him personally as President.

I’m mean keep the Senate and the House and even expand seats? Sure, confirmation of him as President.

Losing the House and therefore having the DEM’s do what the GOP did to Obama meaning, that his ability to pass any major initiatives will be gone in January.

How will the man that won the GOP Primary with a plurality of votes (not a majority) and came in 2nd in the popular vote react?
.
.
.
.>>>>

He can stand on the shoulders of a giant alibi artist and blame:

You knew what they meant, don’t be silly.

Your posts are running out of gas. Should have paced yourself.

no matter what happens trump will claim a great victory.

The vast majority of people will be pulling the Democratic Party lever for their congressman.

How do you spin losing in a rout in the House.

Focus on the senate which looks like it is going to hold.

Which members of the Democratic Party are in denial.

Personally I think if he keeps the Senate and loses the House he will be talking about his great victory.

His comments are already prepping for it (“As you know, my primary focus has been on the Senate.”) He’ll claim the GOP holding onto the Senate was due in no small part to his great campaign work, his brilliance, yada yada yada.

What’s sad is to think of the Democrats regaining control of the House, and then characteristically screwing up whatever advantage it might have bestowed.

What I’m more intrested in is if most Americans agree with Donald Trump, his message and how he delivers it. I think a ton of people do.

What I’m more interested in is if most Americans agree with Donald Trump, his message and how he delivers it. I think a ton of people do.

Polling by various outlets doesn’t indicate that most Americans agree with Donald Trump. The issue is if there are enough people to do anything about it.

Which members of the Democratic Party are in denial.

The “Not My President” crowd.