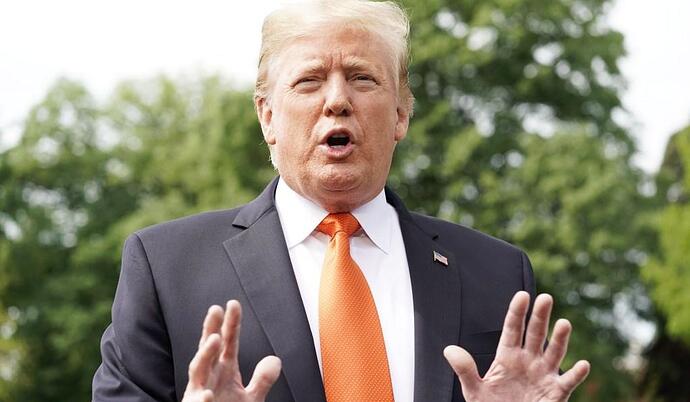 President Trump and Democratic presidential candidate Joe Biden traded barbs on Monday after a firefighters' union endorsed Biden, becoming the first major labor group to back a candidate in the 2020 race.The International Association of Fire...

Remember when Trump was busy blaming forest management and even threatening the state of California with withholding aid and such?

"The president’s message attacking California and threatening to withhold aid to the victims of the cataclysmic fires is Ill-informed, ill-timed and demeaning to those who are suffering as well as the men and women on the front lines.

"At a time when our every effort should be focused on vanquishing the destructive fires and helping the victims, the president has chosen instead to issue an uninformed political threat aimed squarely at the innocent victims of these cataclysmic fires.

"At this moment, thousands of our brother and sister firefighters are putting their lives on the line to protect the lives and property of thousands. Some of them are doing so even as their own homes lay in ruins. In my view, this shameful attack on California is an attack on all our courageous men and women on the front lines.

"The president’s assertion that California’s forest management policies are to blame for catastrophic wildfire is dangerously wrong. Wildfires are sparked and spread not only in forested areas but in populated areas and open fields fueled by parched vegetation, high winds, low humidity and geography. Moreover, nearly 60 percent of California forests are under federal management, and another one-third under private control. It is the federal government that has chosen to divert resources away from forest management, not California.

“Natural disasters are not “red” or “blue” – they destroy regardless of party. Right now, families are in mourning, thousands have lost homes, and a quarter-million Americans have been forced to flee. At this desperate time, we would encourage the president to offer support in word and deed, instead of recrimination and blame”

That and Trump has a long history of anti union practices within his person business. Nothing triggers the Orange Popsicle more than people telling him they like someone other than him.

How dare people voice their support for a politician not named Trump.

I guess the thought of wooing them for support instead of just attacking them never occurred to him?

As normal. Somewhere in the middle is more accurate.

Yes. Trump opened his mouth at the wrong time. It was way too soon.

That and the fire he was criticizing was not one caused by poor management if I remember right.

But there are a lot of fires in Cali caused by poor management and planning. You can’t put out every fire ,allowing the deadfall to build up, and not end up with a catastrophic fire eventually.

The same thing happened in Yellowstone and is still going on. The forest up there is still choked out with diseased wood and deadfall just waiting for a spark.

When doesnt he open his mouth at the wrong time?

this is a great question.

this is a great question.

If he would shut his trap and twitter fingers for even a few days at a time, he would probably poll 3% points higher just on that.

But he made it a California issue, for politics; as you noted, this is something we learned on a national level that takes time to resolve.

I support most of his policies and things he has actually put on paper.

But every time he opens his mouth or picks up his Twitter I cringe.

The fact that you may cringe but will still support him pretty much no matter what he says means you are tacitly supporting this behavior.

But he made it a California issue, for politics; as you noted, this is something we learned on a national level that takes time to resolve.

We learned it decades ago. Those in the industry have just refused to change.

The first clue was in the 50s when the forest service almost killed the redwoods by not allowing fires. The underbrush was choking the trees and redwoods only drop seeds in a fire.

Fire is healthy for a forest, we put out every fire, hence we have vast swaths of unhealthy forests.

What do you mean by support?

Smokey the bear and community fire departments are a tough duo. People still don’t want to chance fires near towns located in dangerous areas. Hopefully we keep on the wet trend we had this year for years to come and enable some fire control.

But let’s get real about some of these fires (SoCal), they are not in areas that have anything to do with management. Chapparel presents its own special problems.

Odd. The whole conversation we had a few days ago where you got smacked around for assuming I voted for trump is oddly deleted, and here you are again pretending it didn’t happen and don’t know.

I’m assuming you will vote for him in 2020 and reward his behavior.

The same thing happened in Yellowstone and is still going on.

The same thing happened in Yellowstone and is still going on.

If it wasn’t happening in state forests as well you might be right. Yellowstone is just the one everyone old enough saw on the news.

Firefighters are union controlled leftists who survive by suckling at the taxpayer’s teat. The profession needs to be privatized and run by efficient corporations so they can weed out these anti-American subversives.

I’m assuming you will vote for him in 2020 and reward his behavior.

You sure make a ton of presumptions. You’re like Miss Cleo except you’re always wrong.